My dad was intrigued by the commercials for the Yoshi Blade ceramic knife. And I think he just liked the name. One of my boys had an imaginary friend named Yoshi at one time and my mom had a doctor by that name. Anyway, when he decided to get one for himself, I think they had a two for one deal and I ended up being the lucky recipient of a free Yoshi blade ceramic knife.

I didn't really expect much because we all know that those wonder products that appear on late night infomercials rarely live up to the hype, but this one wasn't bad. It is quite sharp and it guaranteed not to dull or rust. And so far it's held up. It has a comfortable grip, which I liked. My only difficulty with it is the difference in weight between this and steel knives. It's hard to get used to, but I guess that will come with time. Overall, I was happy with it, which was a pleasant surprise. Now....should I order that "As seen on TV" ceramic green non-stick fry pan I've been eyeing? :) 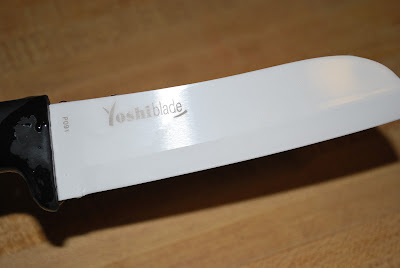