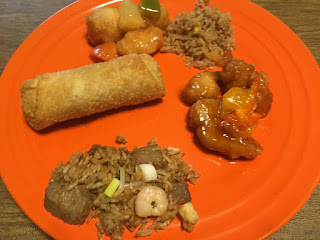 I was in high school before I was formally introduced to Chinese food. Despite having a Chinese restaurant within walking distance, I don't ever remember having Chinese food until the summer of my junior year of high school. That's the year I started working in an office education program in the district office of my high school. Nearly every day someone went out to pick up lunch and that's when I first got a taste of McMing's Chinese Food. My first bite was sweet and sour chicken, based on a co-worker's recommendation and I devoured it along with the egg roll and combination fried rice that came with the lunch combo. McMing's became a frequent lunch stop for the years that I worked in that office. I worked as a student aide the whole following school year and summer. Then I was hired full time and worked in that office for another 12 years. 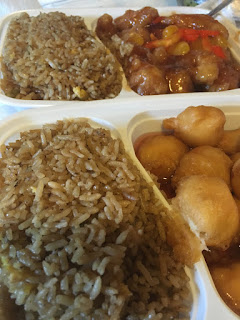 McMing's eventually closed and it was a meal I only had for lunch as it was a drive from home. I never thought I'd find a place I liked as much as McMing's. The few I tried here and there just didn't measure up. Then I tried one near home called J's Peapod and it's been by go to for years. It's as close to those combo meals at McMing's as I can find. They have two locations in Lansing. Love the sweet and sour chicken (which I almost always order - I know I'm boring, but it's what I know I like. I love the fried rice. And I love the egg rolls.

The only things I think they could to to improve are 1) to open a dining room, so I can eat there in addition to getting carry-out. 2) To add smoothies to their menu. I've come to really, really love cantaloupe or watermelon smoothies at Chinese restaurants and it's the one thing missing that I would really love to be able to get there.