I remember the first time I tried Famous Dave's. I was at a ribfest and that stuff was finger lickin' good. The first time I was at a Famous Dave's restaurant, I was in Bloomington, Illinois with all three of my sisters as two of us attended the Hearts at Home Conference and all four of us enjoyed a little getaway for a sister's weekend. I ate until I couldn't eat anymore. 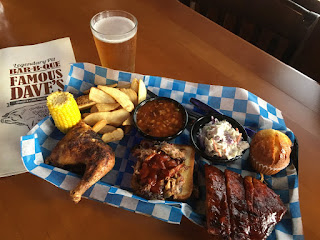 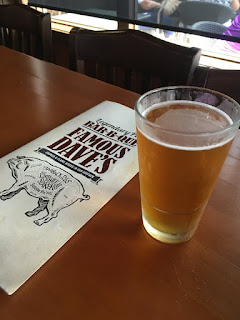 Fast forward a bit and I've made several visits to one of the locations nearest to me in Bolingbrook. I also happen to accidentally meet Mr. Famous Dave himself, a story I'm sure I've shared on the blog before. I was leaving Chicago Gourmet where Dave has been doing a book signing that day. As I exited the gates at Millennium Park to head to the train station, I walked past a guy in a Hawaiian shirt with a big smile. He was just sitting on a ledge watching traffic. When I recognized who I was looking at, I said, "Hey, Famous Dave!" He motioned for me to come over and we chatted for a bit about barbecue and his upbringing before his car came around to pick him up. He also insisted on drawing something for me. Without a suitable piece of paper, he said, "Let me see your plate." So, the plate I had stuck on the side of my bag as I sampled all day became a canvas for a cute cartoon pig with Famous Dave's autograph. It was pretty cool. 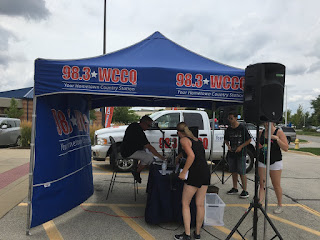 I popped into Famous Dave's in Bolingbrook for their recent Porking Lot Party and met up with some  media friends and was treated to lunch.

The Porking Lot Party was a fun community event where whole hog sandwiches were served and you could purchase other food items with money going to charity. A local radio station played tunes and kids played water games and interacted with local police officers and firefighters. 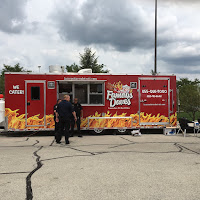 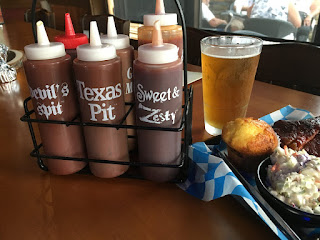 After a stroll around outside, we retreated to the dining room where it was much cooler and my husband and I had a pint and split a large sampler platter of pulled pork, chicken and ribs and I tried out every one of the sauces on the table (Sweet & Zesty is my fave!)

Famous Dave's is still the go to place for a big platter of barbecue goodness. The meats are always so tender and full of flavor and the sides - and cornbread, especially - are reliably tasty. Famous Dave's has locations all over the country with several in the Chicago area. For more on the locations and menus, go to FamousDaves.com.