So, following the spring of restaurant indoor dining shutdowns, I was antsy to be able to get a hot meal and not eat it in my car out of a foam container. I had been getting carry-out stuff quite a bit, but really longed to sit at a table and have a server bringing me a hot meal on real dishes and then clean it up for me afterwards.

As dining rooms remained closed, restaurants began offering outdoor dining, even places that hadn't before. They got creative and added outdoor space and some towns shut down streets to allow room for patrons to dine outdoors.

My good friend, Michelle, and I have over the years met occasionally for breakfast or lunch or dinner. During the early months of the pandemic we'd get together to walk and one day we decided we'd like to get something to eat, too.

I had noticed a place that popped up in my Facebook feed that I hadn't heard of before. It was in nearby Thornton, Illinois and called "The Quarry." For those not familiar with Thornton, it is home of what was once (and probably still is) the world's largest commercial limestone quarry. So, hence the restaurant name. The photos popping up looked so good that when Michelle and I contemplated finding a place to have a meal outside, it immediately came to mind. 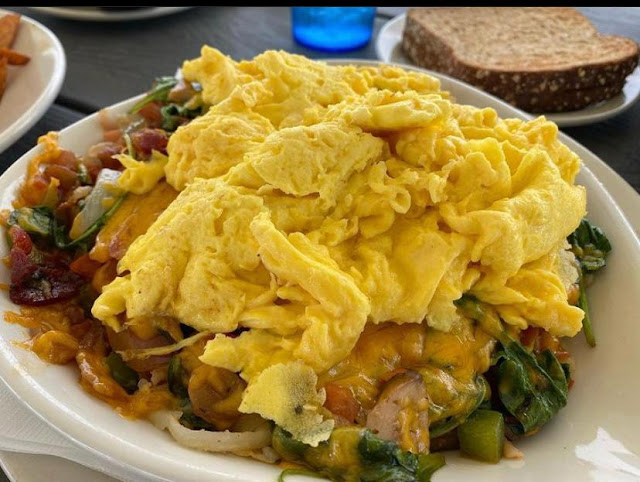 I still have not stepped foot inside. I believe that the location is actually an old gas station. But, behind the building they had a tent up all summer with some tables underneath, so on a nice sunny day we could sit in the shade and have brunch.

We ended up going there 3 or 4 times over the course of the spring summer to have a bite outside. It's not the most scenic spot as it backs up to railroad tracks and is over a gravel lot on the town's main street. However, what it lacks in atmosphere, it totally makes up for in food.

Actually, I can't speak for a whole lot of the menu, because I found my favorite on day one and have gotten it each time - the breakfast skillet. I've gotten the meat lovers and I also have gotten the veggie version and asked them to add bacon - that's really good because it is just loaded with red and green peppers, onions, tomatoes, spinach and cheddar cheese. I always order my eggs scrambled on top of a skillet. It also comes with toast. The Meat Lovers skillet is just $10.50. The veggie version is just $9.50. The prices are incredible for the amount of food you get. I am not kidding when I say that I have ordered a skillet and it has provided 4 days of breakfasts for me. I love knowing there's leftovers waiting in the morning and as all the flavors meld together after sitting the fridge for a day or two, it tastes even better the next day or two.

There are lots of other items on the menu, but you can get breakfast any time. Other breakfast options include omelettes, pancakes and French toast. There's also a sizable menu of sharables, salads, wraps, burgers and sandwiches. One time Michelle ordered the spinach artichoke chicken sandwich and I tried a bite - it was delicious and if I can ever get myself to stray from my skillet, that's what I'll get next.

It's been a bit since we were there, but even now that it's getting colder out, I would sit out and get a bit chilled under the tent to go enjoy one of these skillets this weekend - or I can also order some carry-out to take home. I'm glad to have discovered this gem during the pandemic and know there's a place nearby where I can pick up a good, reliable, reasonably-priced and generously-sized meal. Be sure to try it out if you are in or around Thornton!