Take me out to the ball game

Last week I went to my first Cubs game of the season. I'm a big baseball fan. And a MAJOR Cubs fan. Our sis, Jen, has had season tickets for a LONG time, so each year we get to occupy those seats of hers. Baseball games also mean good food! I'm not much of a hot dog eater, but I can't resist one when I go to a game. They taste so much better at the ball park than any where else. This year the price went up a little. It's now $5.25 if you catch one of the vendors walking by. If you do that, you don't have many options for toppings -- it's just ketchup, mustard and relish. You can, however, walk around to some of the food booths and find some that offer grilled onions, tomatoes and other condiments. This one was just fine with me -- even though it's not a Chicago dog. In fact, a lot of Chicagoans would probably throw tomatoes at me for this. Chicago-style hot dogs NEVER have ketchup on them. 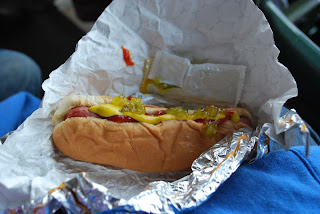 My dad drove so I got to enjoy the view of our great city as I sat in the passenger seat along Lake Shore Drive. No matter how many times I'm in the city (I live in the south burbs), I never cease to be amazed at the beautiful architecture and the brilliant skyline. 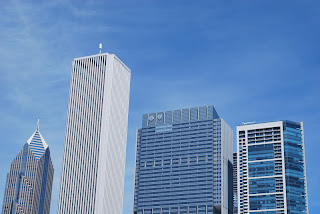 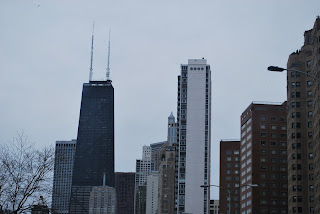 That black building on the left is the John Hancock Center. As we drove by, my dad told me that he watched it being built in the 1960's when he worked for the IRS in an adjacent building. He said he watched them build it  floor by floor. At the time it was completed in 1968, it was the tallest building int the world outside New York City. It has a magnificent restaurant on the 95th floor with great views of the city.