Sometimes you see and hear a lot about a place and when you get there, it just doesn’t live up to the hype. Hattie B’s is NOT one of them.

I really hadn’t heard about Nashville Hot Chicken until a couple years ago on some food documentary I was watching. I didn’t try it until about a year ago when a local place opened called Fry the Coop in Oak Lawn. A few places in the city have it on their menu, some run it as a special and at least one specializes in it, but it’s really not a thing around here. You know where it is “a thing”? Nashville, of course. 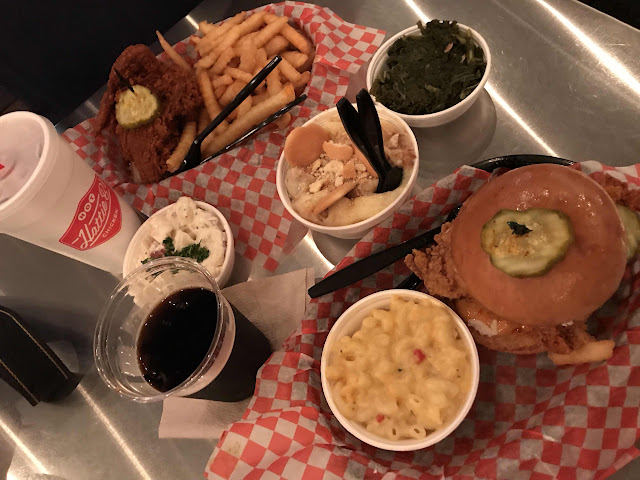 When in Nashville, there are a lot of places that offer it up. Prince’s and McDougal’s are two spots that I’m assured serve up a mean plate of hot chicken. Prince’s is the originator of the hot chicken - it's a century-old story of a player named Thornton Prince whose steady lady fried up some super spicy revenge chicken that backfired. Prince loved the spicy concoction and opened his first restaurant with the recipe.

The place I’d been intrigued by after watching that food documentary was Hattie B’s and it was one of the first places I headed to after getting off the plane on a recent trip to Nashville.

If there’s one thing that bugs me, it’s waiting a LONG time for food. Make that waiting in a long line to order or be seated. Unless I’m really hangry, I can take a bit of a wait as long as I know the food is coming soon and I’m tucked away at a table where I can sip on water and bread and scan my Instagram feed. 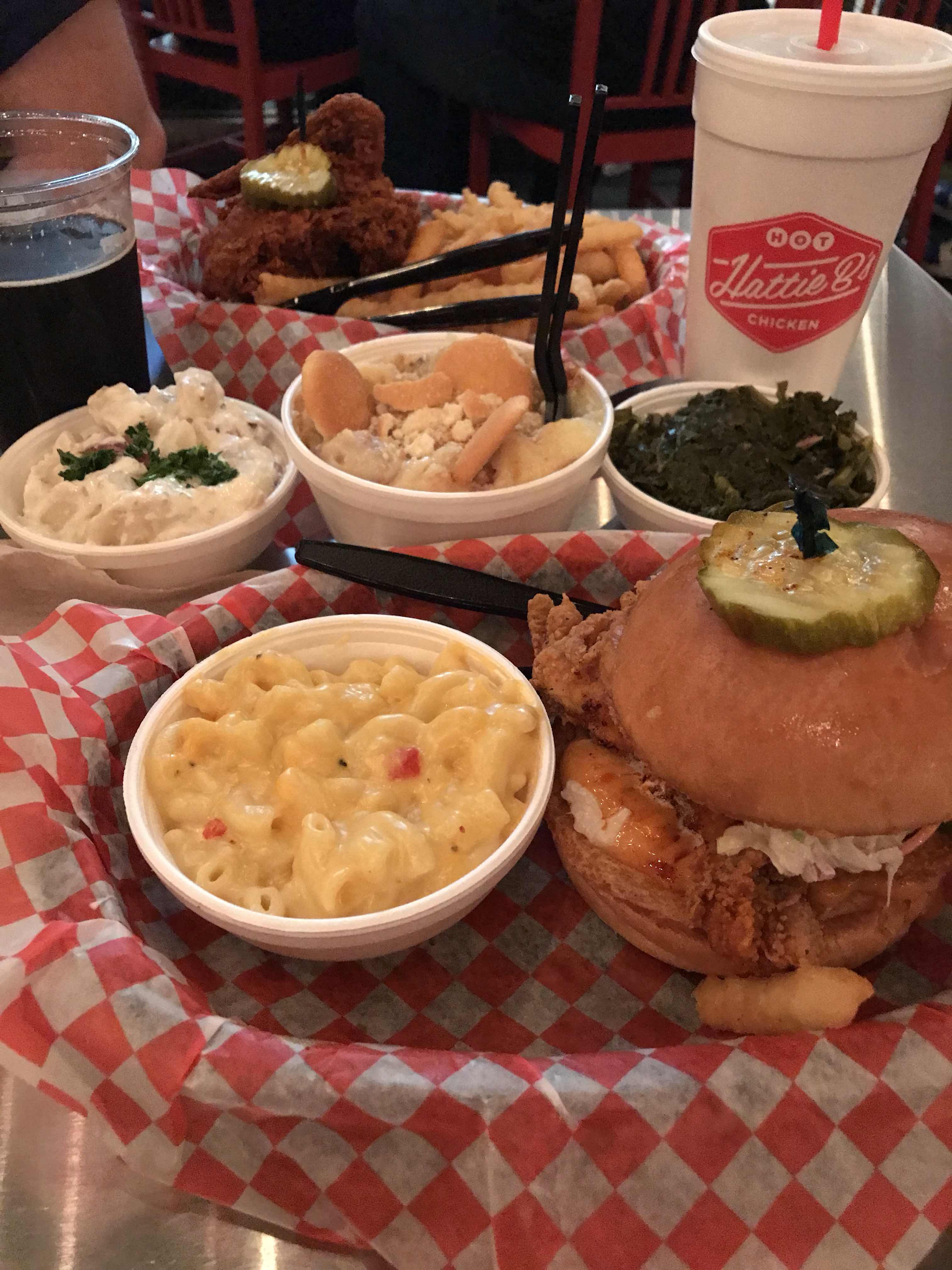 We walked up to the Hattie B’s Midtown location and there was a line that extended across the front of the building.  There are two other locations in Nashville as well as restaurants in Memphis, Birmingham, Atlanta and Las Vegas. It didn’t look like it would take too long, so we stood. In the end it took longer than I expected - an hour and 20 minutes from the time we got in line until the food was in front of us. But, you know what? I would totally do it again. 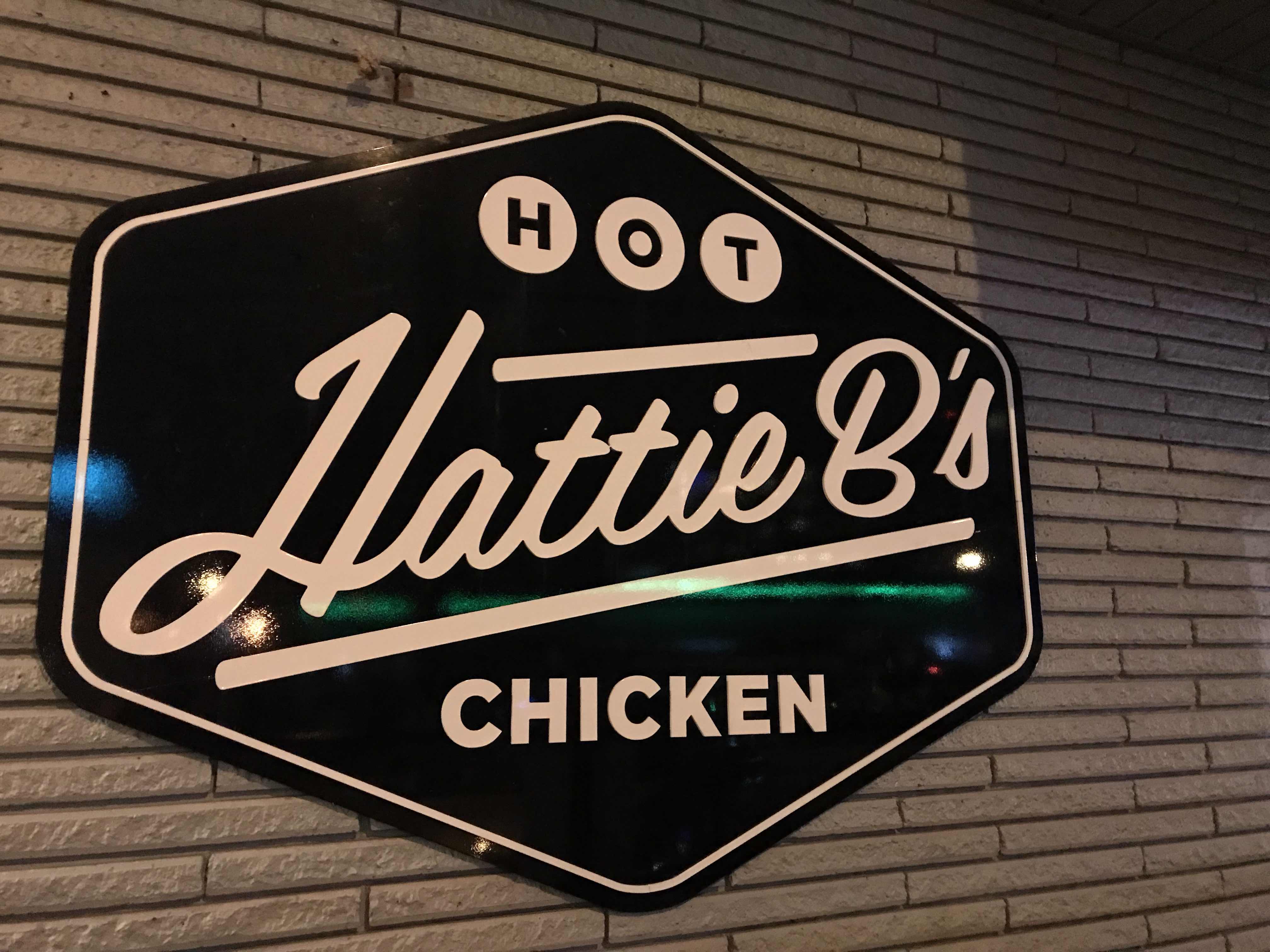 The menu isn’t huge - they do chicken in various forms with a number of heat levels and some typical Southern sides. I prefer my chicken without bones, so I went with a sandwich while hubby ordered a small white (breast/wing) plate. We’d tried a few sides. The red skinned potato salad was the best I had while we were down there (ate a little too much of that!) and we had their mac & cheese (also my favorite of the trip and yes, I ate too much of that, too). 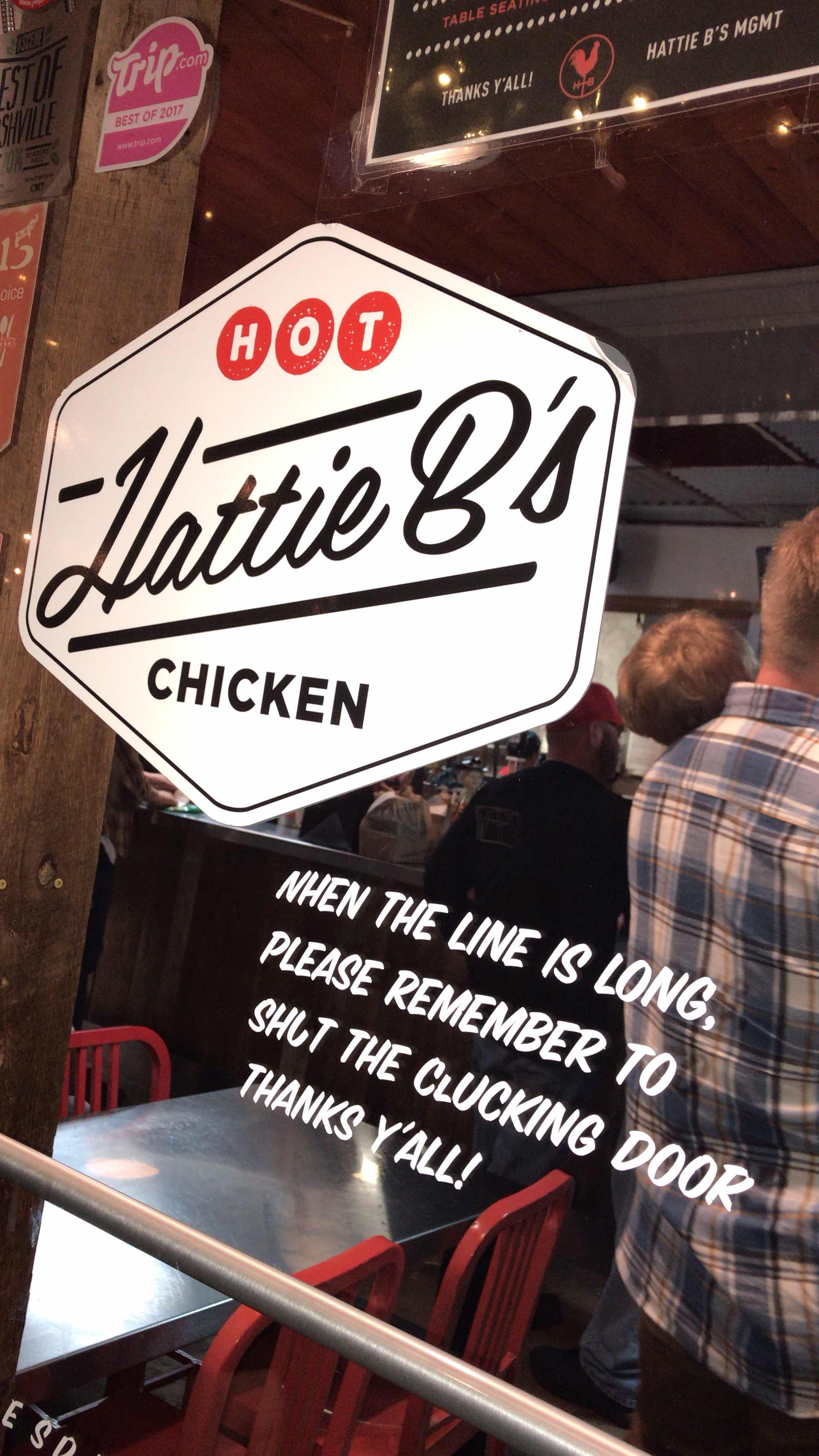 Hubby also wanted to try the Southern greens. I’m usually not a big fan of greens, but loved these. I also ordered crinkle cut fries that were nicely seasoned. 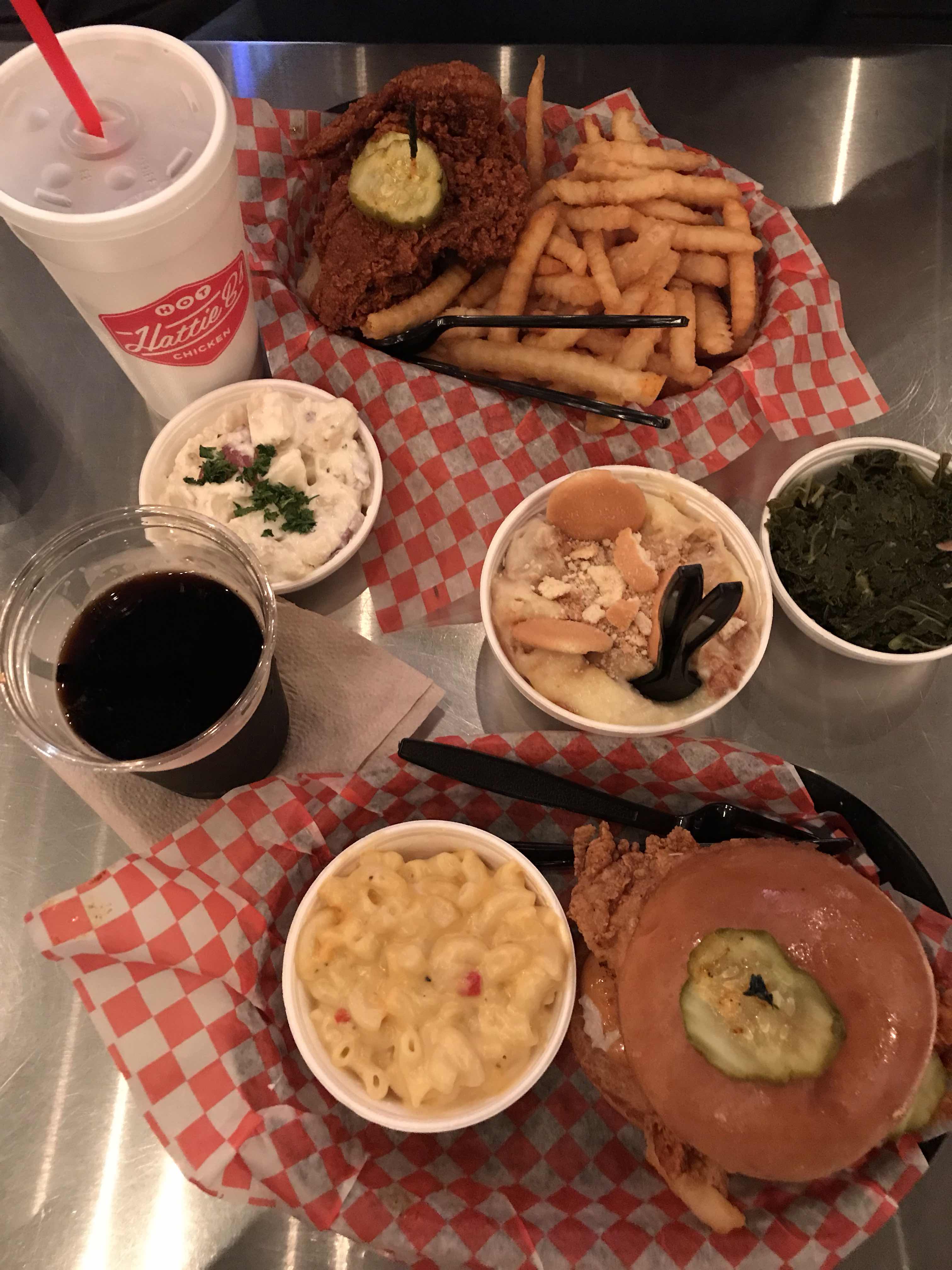 I also couldn’t pass up banana pudding when I saw it on the menu and I’m so glad I didn’t pass. It was scrumptious.

So, as far as the chicken. I should have heeded the warnings I remembered from the food show I watched. I went back and forth trying to decide if I should get the Southern chicken which has no heat or the mild. I figured there was something just not right about going to a hot chicken place and not getting hot chicken, so I ordered the mild. It was really more in line with medium heat. My mouth was on fire, but I couldn’t stop. I was equipped with a tall glass of sweet tea and potato salad and mac and cheese to cool me down. 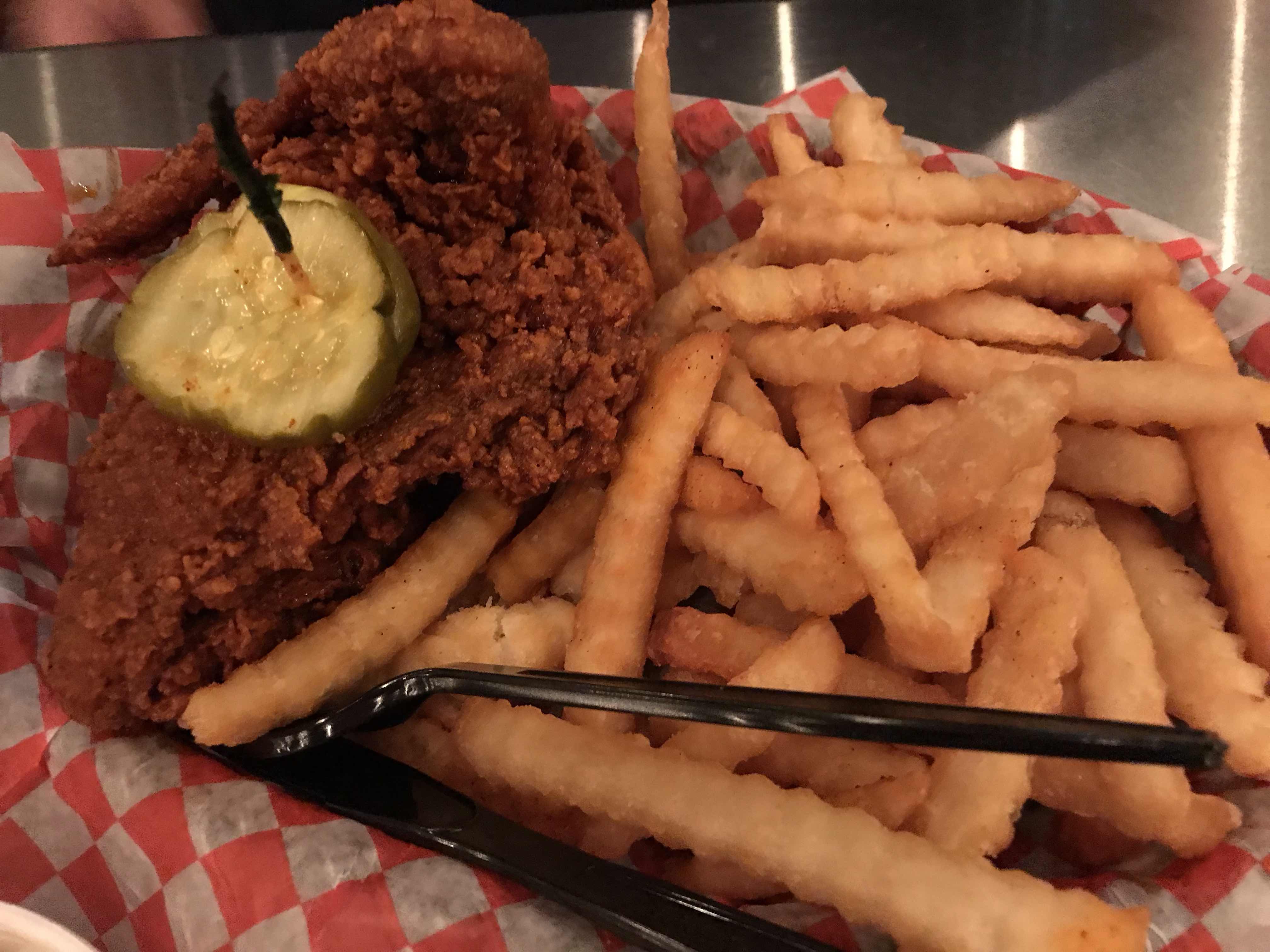 Hubby ordered his chicken as “medium” and he also said it was one he would have rated as “hot” or higher. And he puts hot sauce on everything, so heat doesn't normally bother him. He had a good sweat going, though. 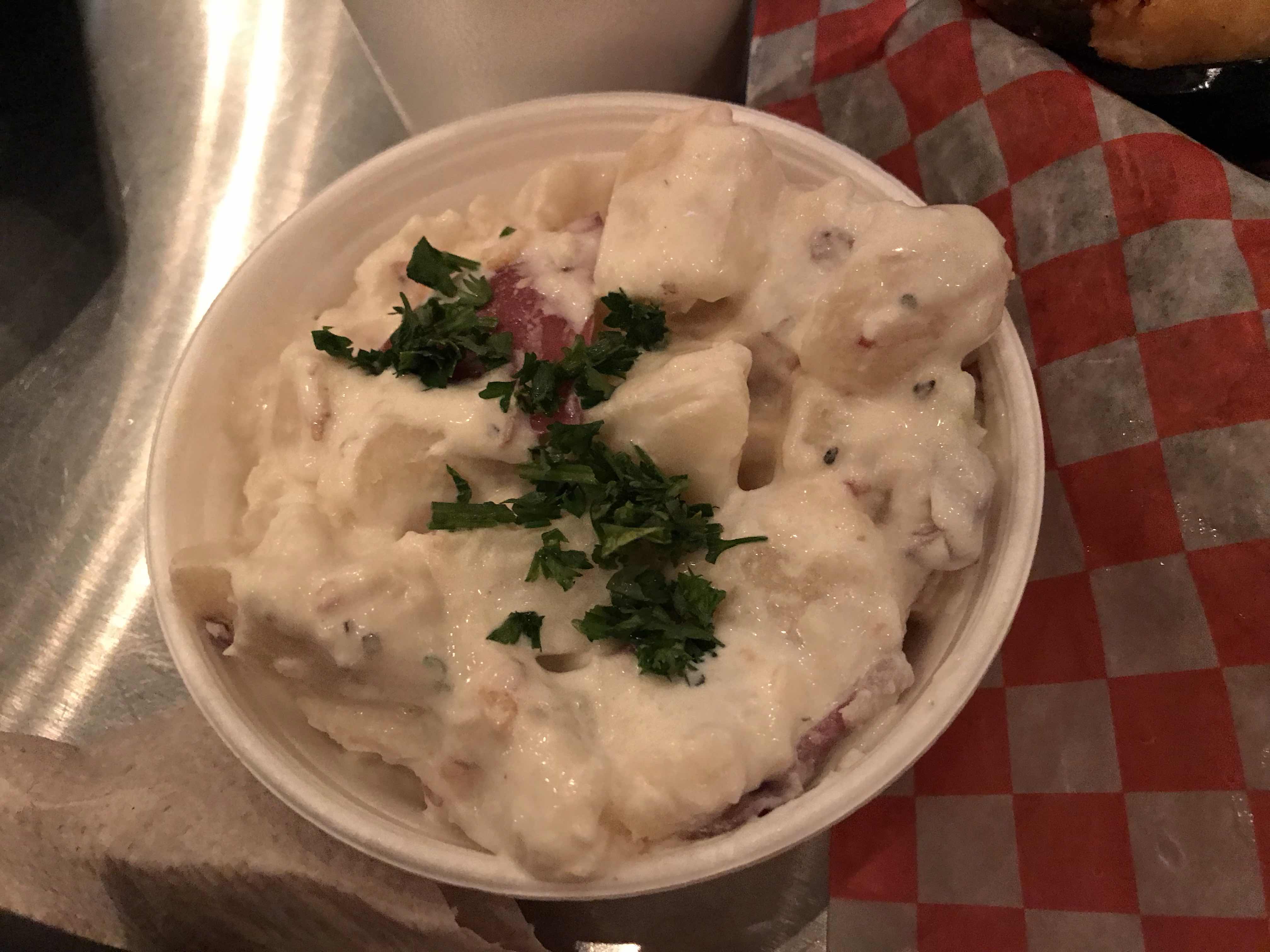 They also served local craft beer there, which was a bonus. Although we were there early evening on a Saturday, there was plenty of room in the small dining room, which is actually a patio enclosed with plastic sides. We sat an enjoyed every bite.

And usually when we travel we take leftovers back to our hotel and it ends up getting pitched before we head home because we are eating out at every meal. Wasn’t happening this time. I had the other half of my sandwich and some banana pudding for breakfast the day we left to head home. I would have tucked that thing in my suitcase and brought it all the way back to Chicago before I would have put it in the garbage. It was so perfectly juicy and crunchy and spicy and I am missing it so much already. 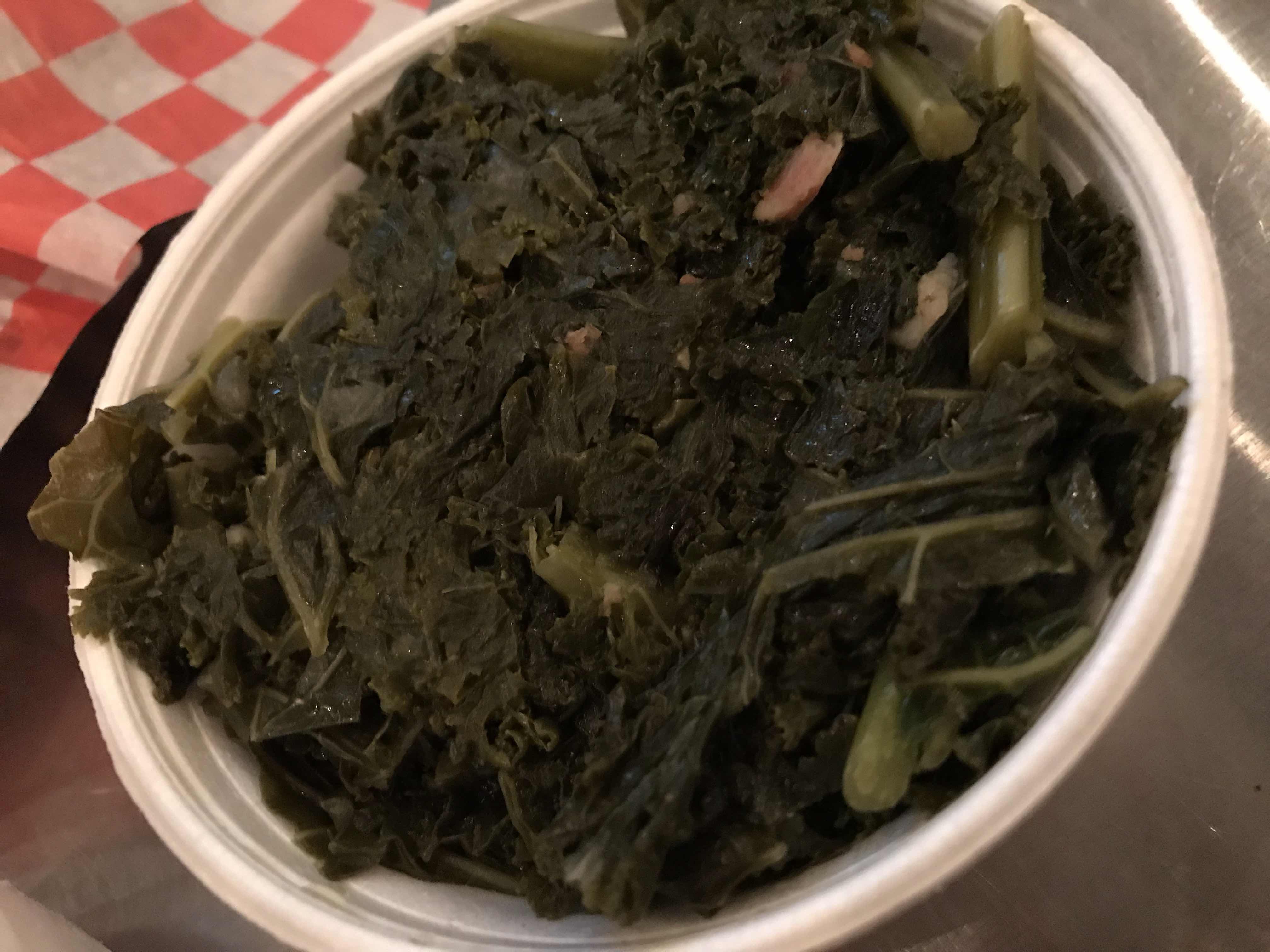 Even the waiting in line wasn’t that big of a deal. It happened to be a December day when the weather was in the 60s, so it was pleasant. We chatted with others who were waiting. No one at all was from Nashville. In front of us were people from Florida, New York and New Jersey. Behind us people from Oklahoma and Maine. When we finally got close to the door, we noticed people going in and out for carry-outs and there was a sign on the door about ordering online or for carry-out and picking it up. If I’d known that in the beginning, I might have done an online order to-go and skipped the line, but standing in line as the pedal bars go by and chatting with other hungry tourists is kind of part of the experience. 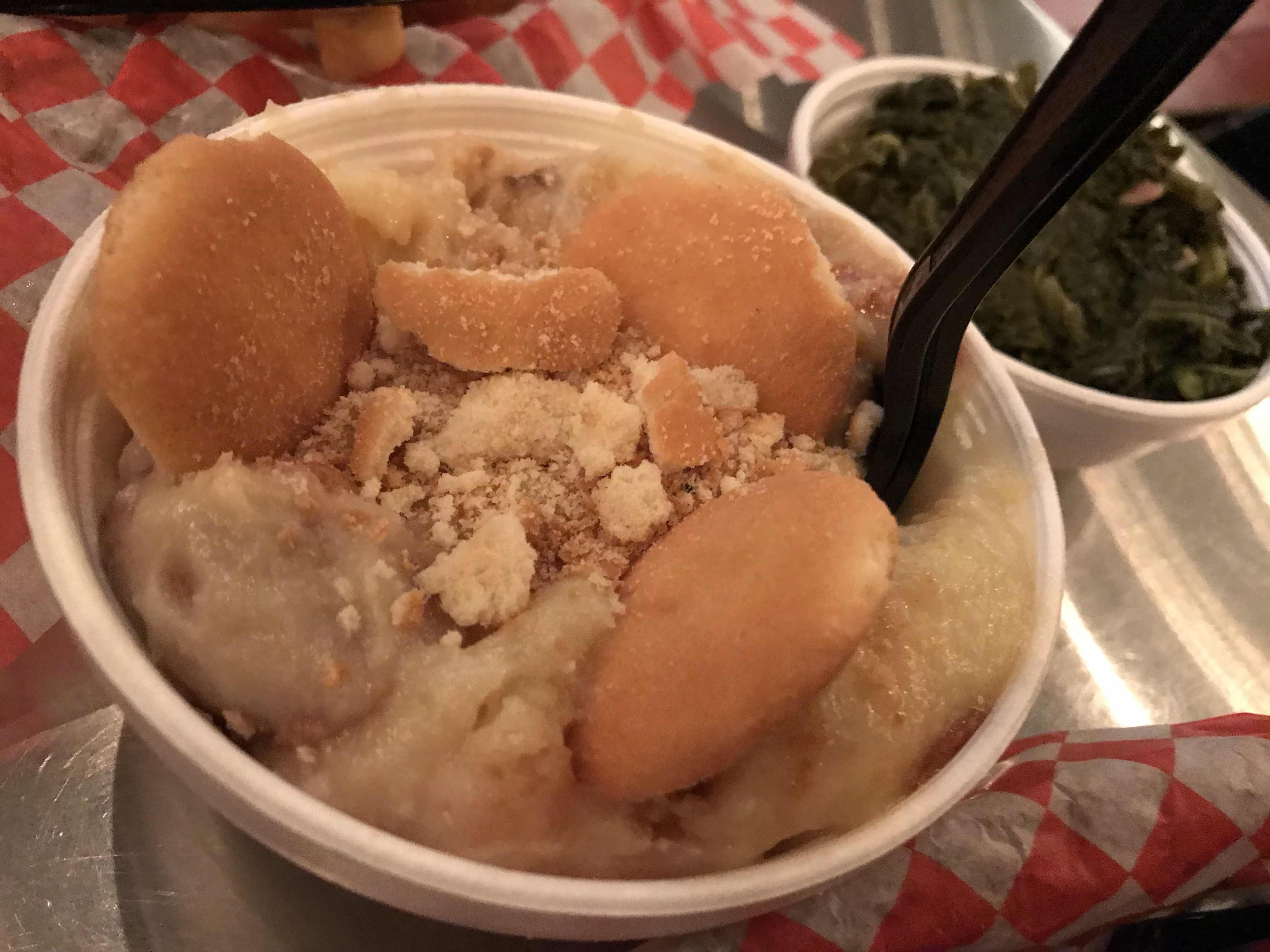 They also do Uber Eats, so if you really don’t want to head out, you can order in and enjoy it where you are staying.

This was my first visit to Nashville. We had a blast, but of course, I was looking up foodie spots before anything else on our itinerary and I’m glad I finally made it to Hattie B’s. And I’m happy to report that it lives up to ALL the hype. If you find yourself in Nashville, make sure you stop by here for some hot chicken, mac and cheese, banana pudding and sweet tea. 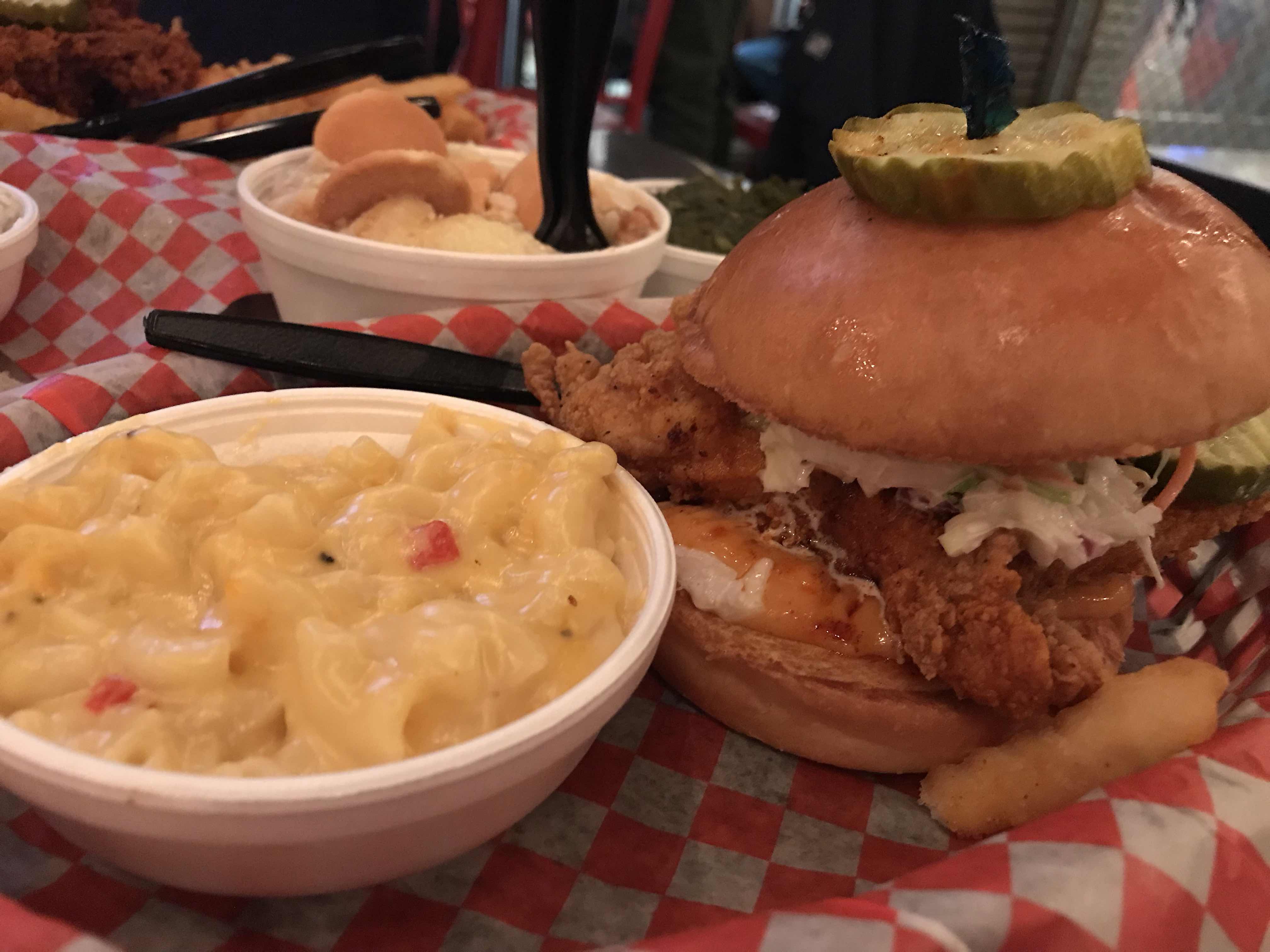