Looking forward to opening of Hofbräuhaus in Rosemont

***UPDATE***
According to this post on GermanPulse.com, Hofbrauhaus Chicago will be opening around the third week of January!!!!!!!

Years ago, when I, ahem, was a bit under drinking age, I was first introduced to Hofbräu beer. My father-in-law is a German immigrant and he often had  Hofbräu to drink. In those days it wasn't as easy to find. Now I see it in local liquor stores. Way back then it was usually picked up on an outing for dinner at the Heidelberg Restaurant in Elmhurst, which sadly no longer exists. The restaurant was downstairs, with Bavarian accents, an accordion player and a big sturdy German lady in the kitchen. Upstairs was a deli where you could purchase meats, sausages, baked goods and lots of imported goodies, including Hofbräu by the case.

Now it can be found much more easily and is in the rotation of imported German beers that make their way into our garage fridge. At a recent barbecue at my in-laws, my father-in-law pulled out some Hofbräu and frosted mugs, which I had to wash down a grilled bratwurst. All that was missing was a jolly man on accordion playing "Edelweiss."

I'm really looking forward to the opening of the  Hofbräuhaus in Rosemont, Illinois. I just checked up on the website and it looks like they've gotten pretty far on construction...I'm assuming that they'll be opening right in time for Oktoberfest. The menu sounds great, too, with lots of German sausages and specialties. Read more here - http://www.hofbrauhauschicago.com/menu/. 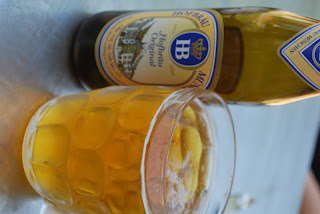