I took a recent trip up to McHenry, County, Illinois to check out some of the restaurants that would be participating in their first ever restaurant week. In a whirlwind 20 hours, we visited three restaurants and worked in a little side stop for a flight at Crystal Lake Brewing. (Yes, I did wear my stretchy pants!)

Last summer I visited the McHenry County on a media tour and learned what a good foodie scene there was in the area, and in Crystal Lake, in particular. On this trip, we were there overnight and our hotel was in Crystal Lake as well as our lunch destination, Georgio's Pizzeria & Pub.

I had a chance to sit and chat for a little bit with owner Brian Coli and learn a bit about this family-owned operation. The Crystal Lake location opened in 2002, with a second location in South Barrington that debuted in 2011. He's also currently scoping out a location for a third restaurant to open in the near future. His brothers are also involved in running the two stores. 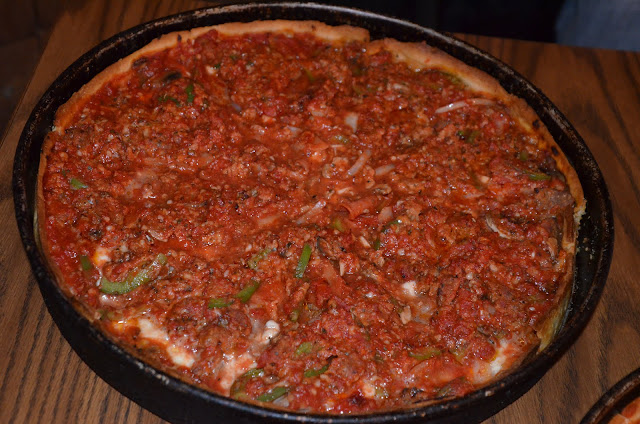 So, I was so glad to get to hear first-hand about the history of the place. There are a lot of pizzerias in Chicagoland that make deep dish, but this is one that - although it's been around just 17 years - has links to the early roots of deep dish Chicago-style pizza. 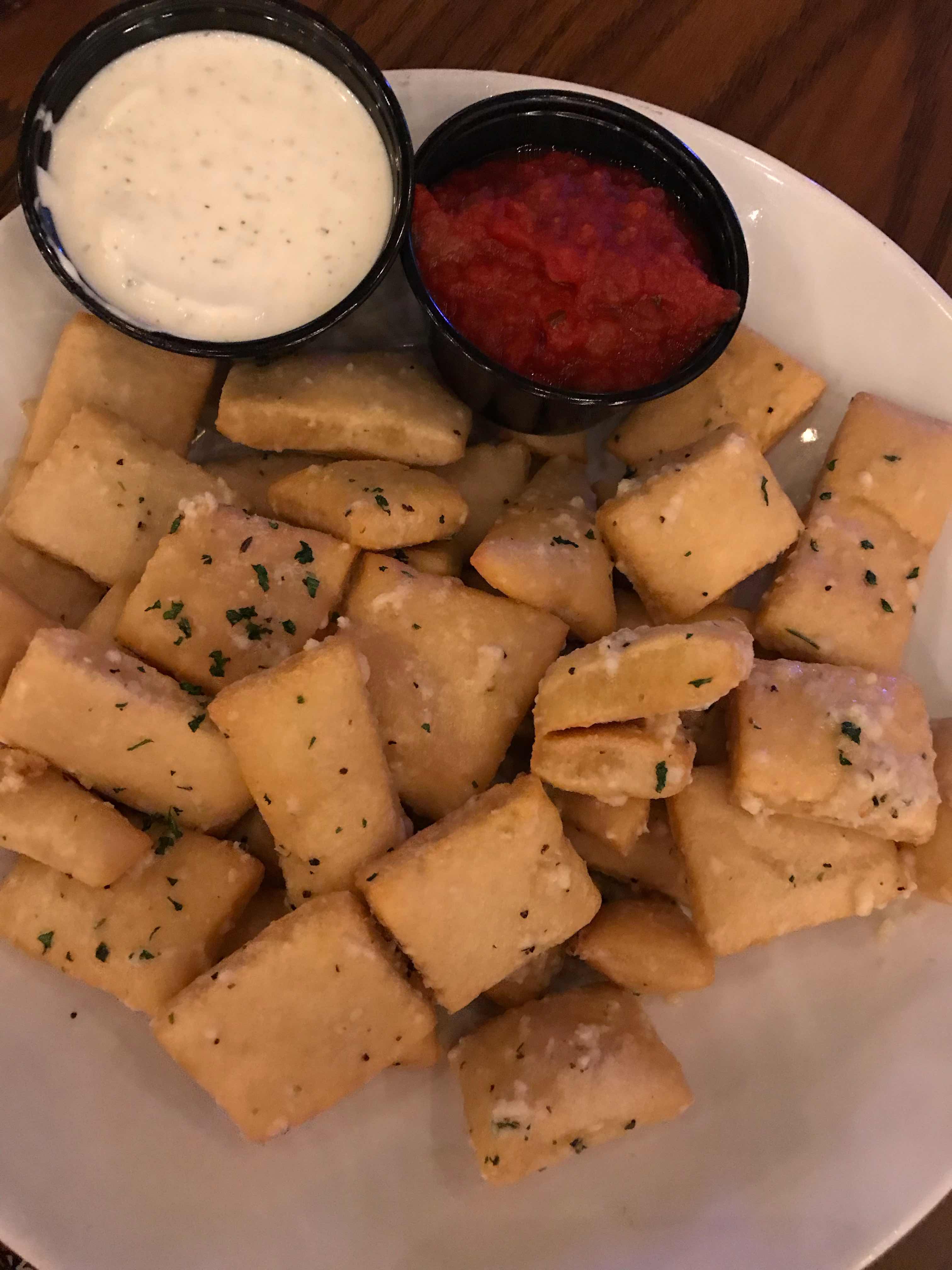 Back in 1989, Coli's father opened a pizza place in Elwood Park (that was where my sister and brother-in-law bought their first house and it'll always have a special place in my heart!) He intended on serving thin crust only, but shortly before opening, he saw a press releases about two ladies who were credited with being the originators of Chicago-style deep dish - Alice Mae Redmond and Ruth Hadley - or at least being the ones to alter the recipe to create the scrumptious deep dish that we know today.

Redmond worked at UNOs Pizza decades ago where she cranked out pans of Chicago-style deep dish and she later recreated it at Geno's. The sisters were retiring and Coli's dad was introduced to them and he asked if they'd come work with him as he got his business off the ground. The gals taught him what they knew and gave him their recipe. So, when you get a deep dish pizza at Georgio's, there's a lot of history there. 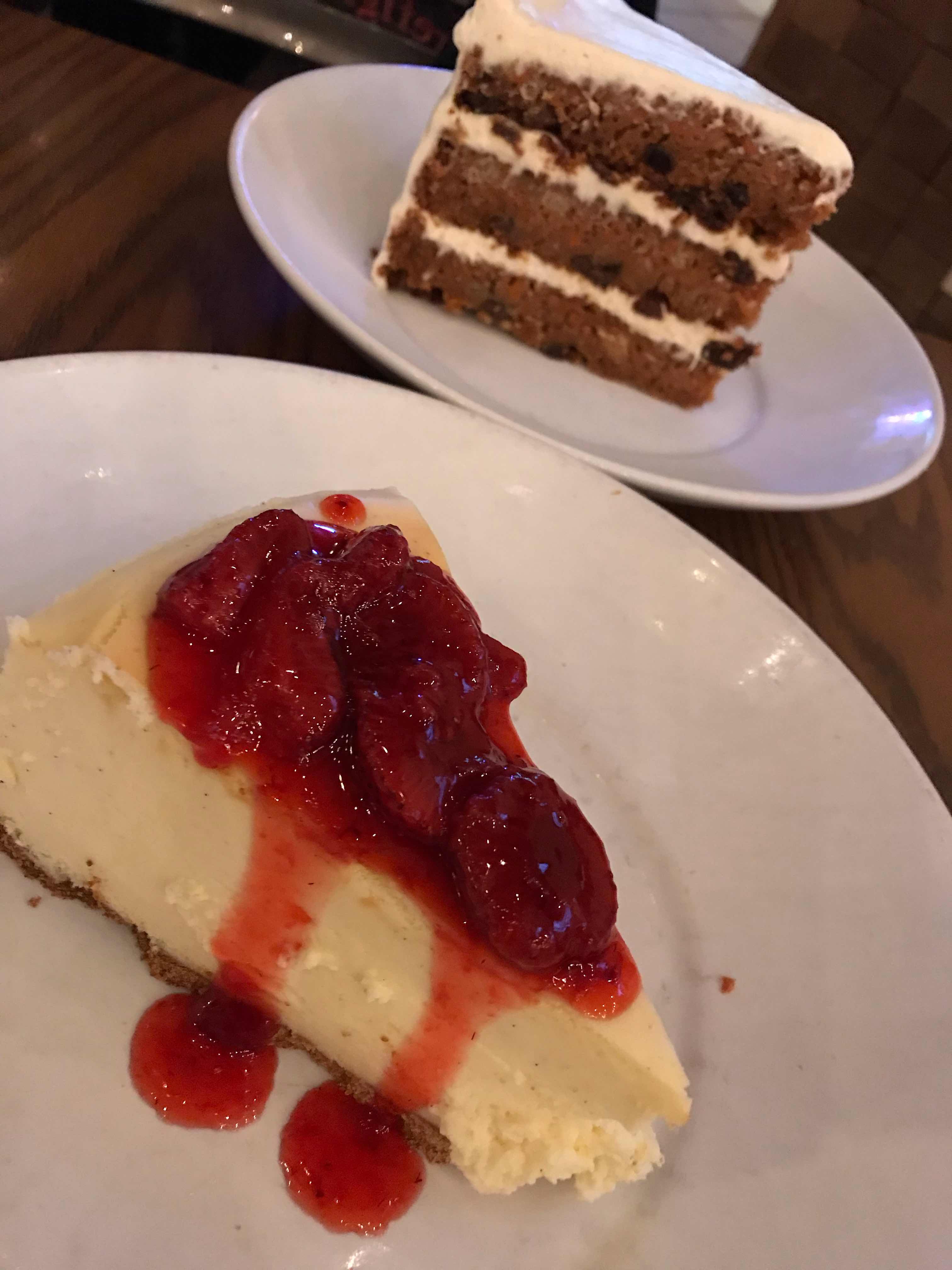 After Coli graduated from college with a degree in finance - after working in a number of restaurants in high school and college - he just felt drawn back to the pizza biz. The recipes used at Georgio's are the same ones that Redmond and Hadley shared with his father.

I always love hearing stories like that and learning the background of the business.

So, in case you were wondering - yes, it lives up to legend. It's old-school deep-dish with a perfect sauce - midway between some others that may be a little two bland or a little two sweet. It's at that sweet spot right in the middle with a nice flavor.

And the crust still has a nice little crunch even with the additional dough that is present in those massive pizza pies. Speaking of dough...Coli could talk about it all day. He expressed the importance of a good water source and that water is an important ingredient in pizza dough, something I never would have considered.

We started out with the dough nuggets - crispy little fried pizza dough bites tossed in a parmesan garlic butter sauce...perfect for a carb lover like me. All the sauces are made in-house and it was served with marinara and homemade ranch sauce that was sooooo good! He said customers often ask him to bottle it and sell it. I'd definitely buy a bottle or two. 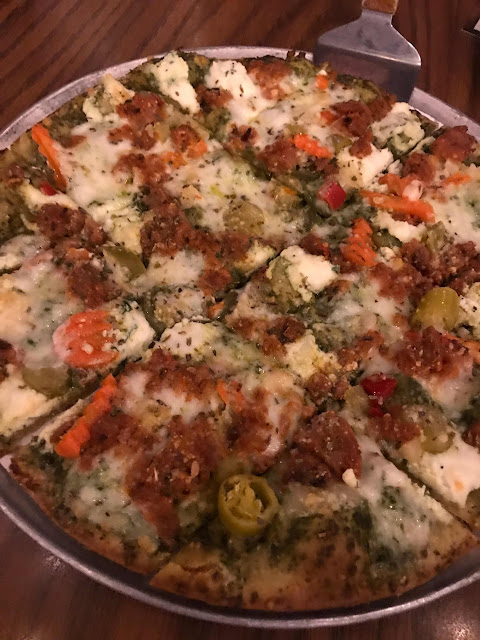 Next up we tried out a thin pizza that was created especially for McHenry County Restaurant Week. It's a variation of a specialty pizza on the menu - pesto margherita, which includes a fresh mozzarella cheese that is made in-house, a basil pesto and tomato on a thin crust that has a fabulous crunch.

The new restaurant week feature has a few delicious additions and it's called Spicy Meatball Margherita Pizza. It's a crispy thin crust pizza with basil pesto, house-made fresh mozzarella, ricotta, tomatoes, hot giardiniera, ground meatball and parmesan. It's such a phenomenal combination of flavors and I now want ground meatball on every pizza I eat forever. :)

This is the sausage only deep dish - simple and delish! 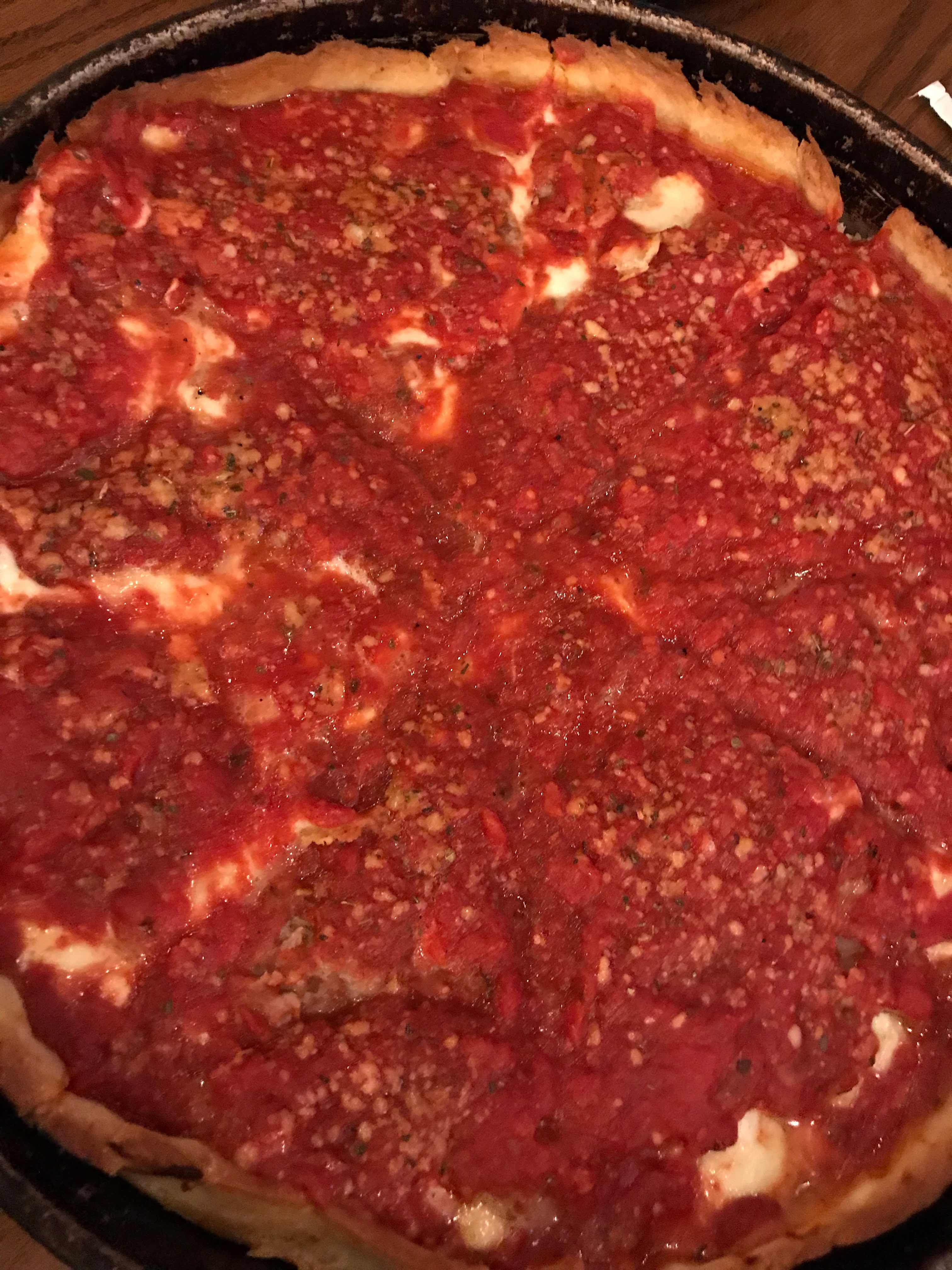 This would be the Papa Georgio, which you can order in thin crust or deep dish. It was loaded with goodies - sausage, bacon, pepperoni, mushroom, green pepper and onion. Oh, and I couldn't resist adding the ground meatball to it. This was a meat lover's dream and the veggies added such a nice flavor. 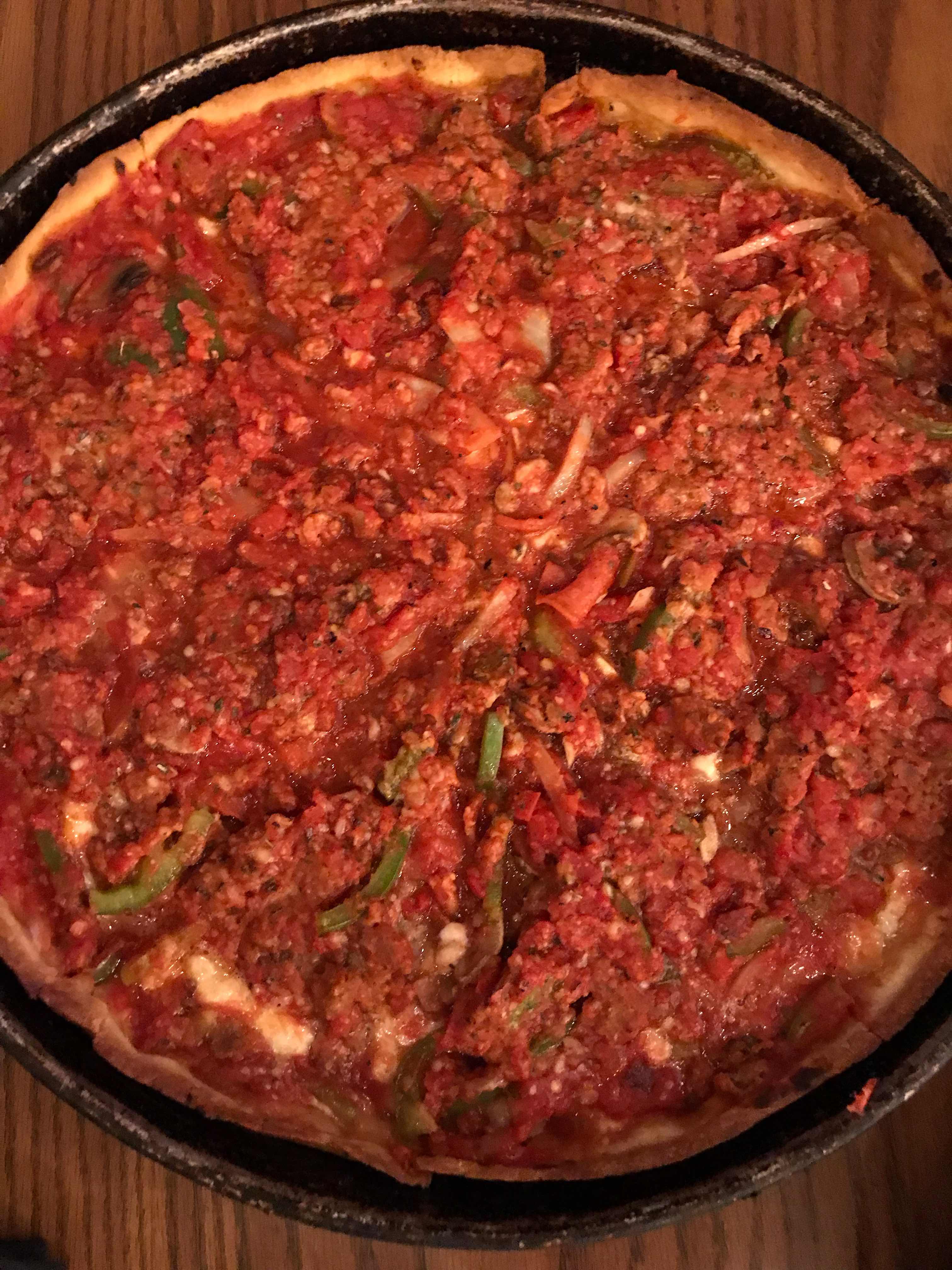 There's also a nice selection of craft beers to choose from to enjoy with your pizza. I loved sampling and on the next trip back I'm not sure if I'll get thin crust or deep dish. They are both equally amazing.

And I really should have stopped there. And I was going to. There was no need to go on to the dessert. But, Coli mentioned that they make their cheesecake and carrot cake from scratch. Cheesecake is hubby's favorite dessert and carrot cake is one of mine (I have like 5 faves - don't judge me!). I have never been happier to have not gone with my gut. I would have missed out on one of the best desserts I've ever eaten. Seriously, that carrot cake was insane. It was tall and dense and slathered in such a lovely cream cheese frosting. I can't stop thinking about it. I expected to go there and get really good pizza. I didn't expect to leave there declaring this the best carrot cake ever. But it really was. So, believe me when I say not to skip dessert!

Be sure to get to Georgio's in Crystal Lake during McHenry County's first ever restaurant week and try out that Spicy Meatball Margherita while you can! Restaurant week kicks off today and runs through March 3rd. For more info, click here. 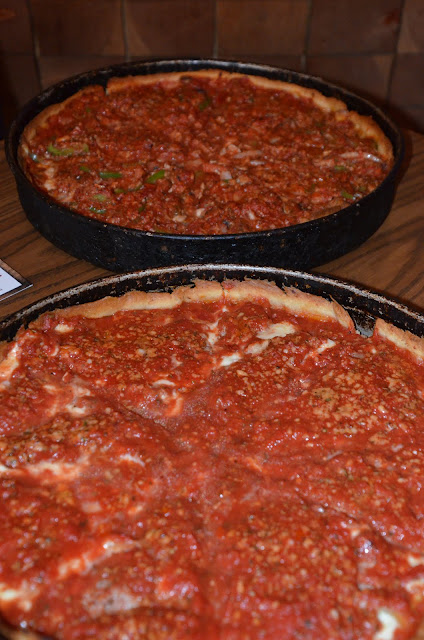 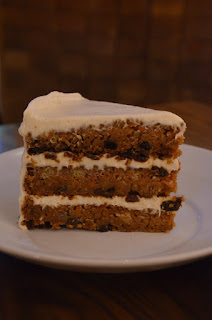 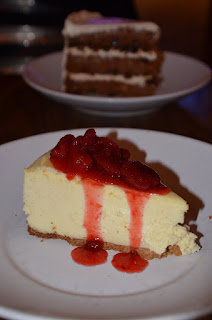 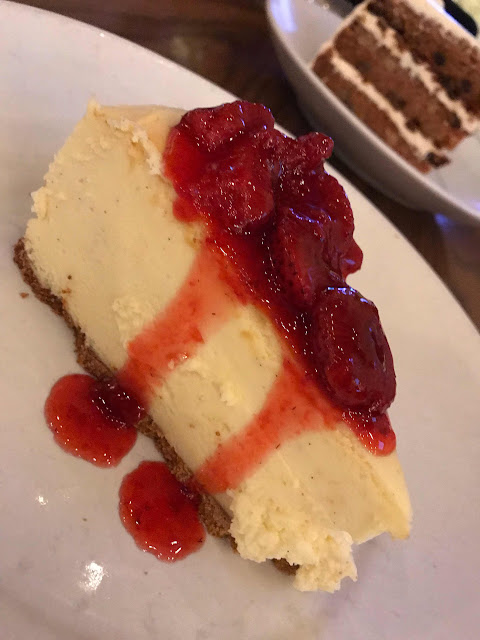 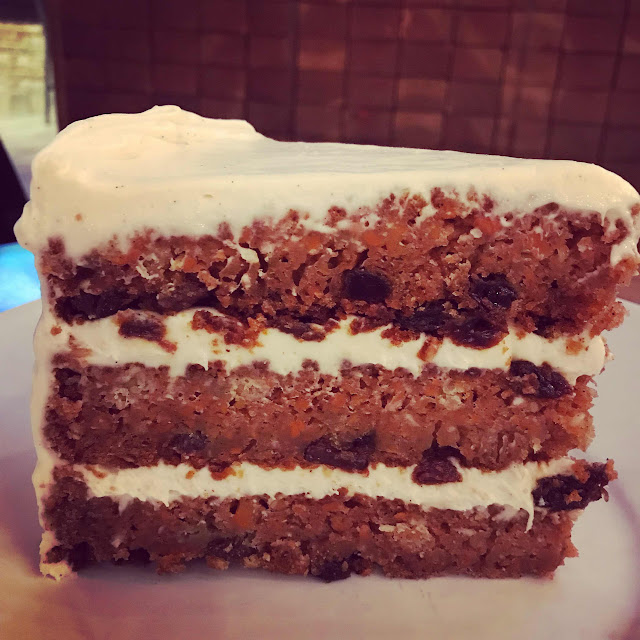 I also wanted to include some shots of our newly-decorated room at the Holiday Inn Crystal Lake. They're undergoing renovations and we got to stay in one of the new rooms. It was quite roomy and nicely decorated. 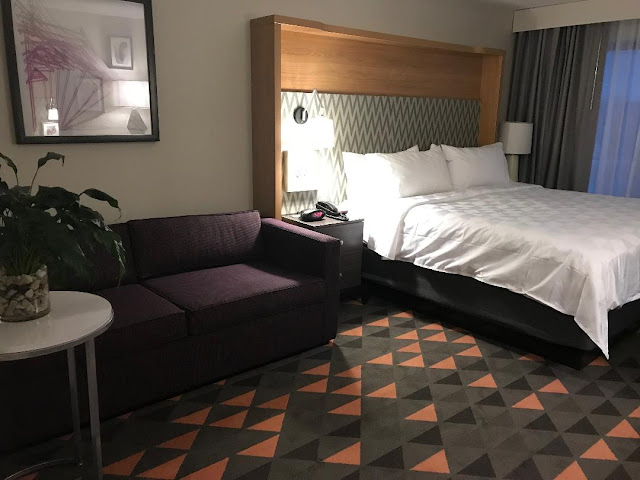 There was a comfy king-size bed as well as a soft that folds out to a bed. 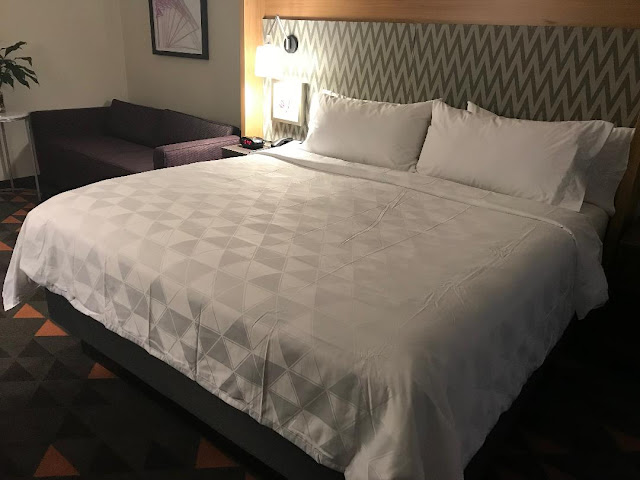 It also had a nice long counter (I'm always spreading my stuff out and taking up lots of room) in addition to a nice desk/workspace and also a bench, counter and mirror to sit and to put makeup on. Extra hooks are on the side, too, which was nice and USB slots for easy charging. And I loved that pretty orchid, which I'm pretty sure was real - and if it's not, it's a really good imposter. I can't remember the last time I stayed in a hotel room that had plants and flowers - real or otherwise. Loved these details. 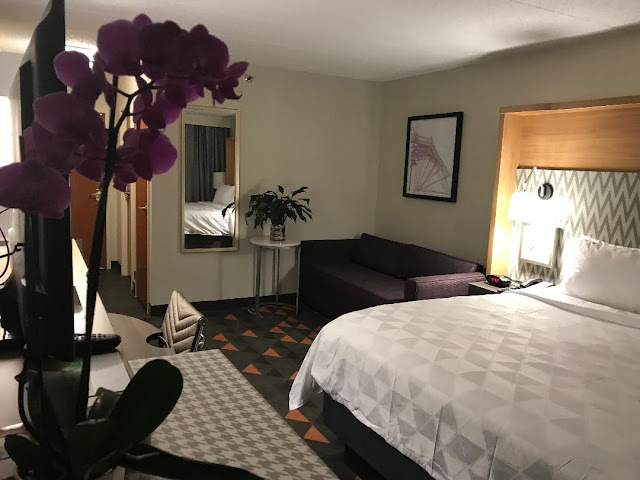 And again, don't judge me. We had brunch reservations made for after check-out, but we also got breakfast tickets with our room. So, who am I to pass up a breakfast buffet? I went down and got a little to go container to munch on while I worked. There was a nice selection of hot breakfast items and fresh fruit. 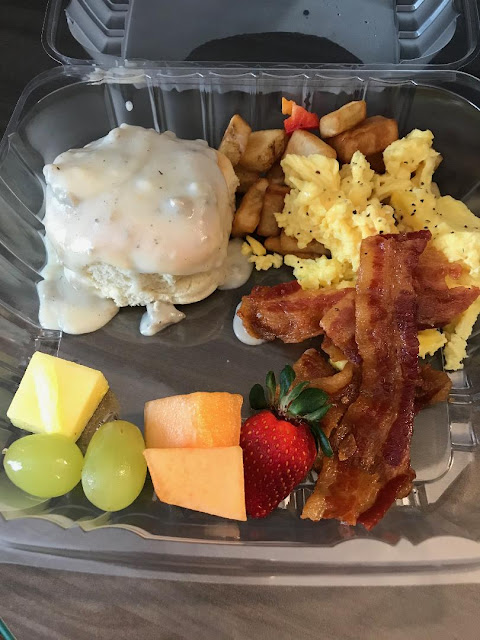 **Our visit was hosted by Visit McHenry County. I was not compensated for this post. All opinions are my own.