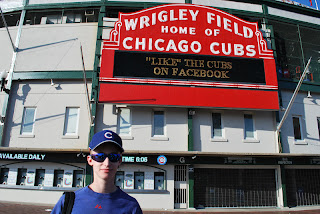 So, Friday I spent my day at my favorite place on earth - the Friendly Confines. For those who aren't Cubs fans, that's what we call Wrigley Field. I've been a Cubs fan forever and always will be -- no matter how many years it takes them to get to another World Series. My sister is a season ticket holder, so I get to go to quite a few games. I'm telling you, that place is my sanctuary. Every trouble in the world melts away when I'm sitting in those upper deck seats looking down at that piece of heaven - a lush green landscape with four diamonds and ivy creeping up the wall before the iconic manual scoreboard. I have to admit that when I go to a more modern ballpark, I do appreciate the amenities (Wow!!! Girls don't have to wait in line for a bathroom at U.S. Cellular Field? And an manned elevator delivers you to the upper deck at Miller Park?!?!), but I certainly cherish the history and nostalgia of being at Wrigley, especially for a day game. It really takes something major, like the playoffs (how often does that happen - LOL!), to get me to go to a game when the lights are on. I'm an old school day game girl all the way! I loved looking over at the scoreboard and seeing that every other MLB game being played was at night. We were at the only daytime ballgame in the major leagues that day. It was fun that my brother and niece happened to also be there, so we stopped over to see them...and my sister-in-law and another niece were over watching from a rooftop. 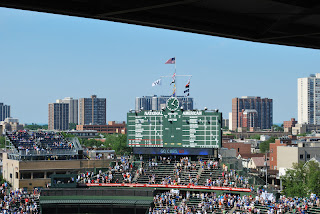 So, back to Friday. Cubs played the Red Sox, which is a pretty rare occurrence, since it's only been in recent years that inter league games were introduced. It's my understanding that the Red Sox had only been to the Friendly Confines once before, in 2005. So, that made it fun. It was even more fun that the Cubs won. And one of my favorite athletes on earth was pitching - Ryan Dempster. I swear, he's got to be the nicest guy in baseball. He's super cool with the fans, never brushes off a kid asking for an autograph, is funny and has a wonderful charity that he runs. I was thrilled that he got two hits that day - including a triple that he scored on after DeJesus' single. He also pitched seven scoreless innings. Ok, I know this is a food blog...I'm getting to it, I swear. 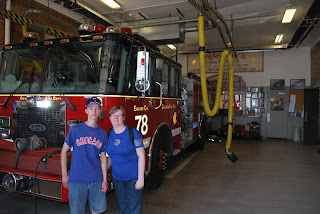 The Cubs won 3 - 0. My oldest attended with me and ever since he was maybe 7-years-old, we've gone to hang out where the players exit the locker room so that he can try to score some autographs. He usually is lucky enough to get at least one. Once they clear things out inside the park, we often head out to the player's lot to try to get another autograph from a player heading to his car. It's a lot of waiting around, but I don't mind. It was a great day at the ballpark. Afterwards, there was a Wrigleyville Block Party going on so we went down to check it out. We also stopped in the Wrigleyville Firehouse across the street on Waveland, as this son - my oldest - usually likes to do. My husband is a firefighter and my son is a fire cadet, so he always like to take a walk inside and chat for a minute. There's always lots of visitors stopping in the station after the game. Our original plan was to get some lunch before the game, but that didn't happen. I can't complain about having a hot dog at the ballpark for lunch, though. How can you go to the ballpark and not have peanuts or a hot dog?

So, we decided to hang out in Wrigleyville following the game and have some dinner. Of all the times we've been to games, we haven't been to many of the restaurants in the area. We usually eat at the game or I have one of my little ones with me that I'm not to keen on taking into the pubs. But when we do eat in the neighborhood, our usual place to grab a bite is the Cubby Bear. The atmosphere is cool and the food is awesome. However, as we were in the firehouse, a couple was asking one of the firefighters for restaurant recommendations and I heard him mention Rockit Burger Bar. I've seen some awesome looking photos show up in my Facebook feed on the place, so I immediately wanted to head over there. I never even realized it was right there at the corner of Clark and Waveland. Despite it being a post-game Friday, we were seated within a couple minutes - a window seat that looked out down Waveland at the scoreboard. Perfect!

We sat and perused the menu of 16 burgers and sandwiches, salads, mac & cheese and pizzas. I so wanted to get one of the flat bread pizzas, which sounded incredible (like the spicy calabrese with salami, grilled green onions, shaved asiago, mozzarella and tomato basil sauce!!!) However, I just couldn't go to a place known for their burgers and order a flatbread pizza, as awesome as it sounded. That would be like going to a steakhouse and ordering a hot dog or a sushi bar and ordering steamed white rice. Well, ok, not quite...but my point is, I had to take full advantage of the burger options in front of me. The descriptions were all mouth watering. After a few minutes, I settled on the Locavore - "local beef raised in the Midwest, Goose Island beer battered onion rings, nordic creamery smoked cheese, neuske bacon aioli, pretzel bun, served with french fries." Before I could place my order, my son ordered it. I know I couldn't order the same thing -- because I'm not shy about bumming a sliver of a sandwich off of the family member I'm dining with so that I can sample it. I had to quickly make a switch and I picked a good one - the Truffle Mushroom Burger (black angus patty, gruyere, truffle creme fraiche, served with truffle fries. 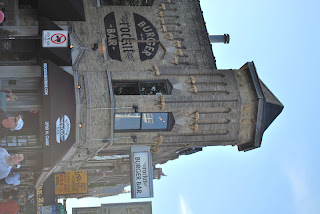 Both were fantastic. The Locavore's smoked cheese was beyond delicious - and they loaded 3 or 4 slices of it on top of the absolutely prefect pretzel roll. Mine was equally incredible on a buttery toasted bun with the gooey gruyere oozing off the bun and onto the truffle fries, which blew me away. They had a hint of flavor from the truffle oil used and parsley. Whenever I dine out and have ordered fries, I usually don't even bother packing them up to go...or if I do, I pass them on to our pup. Fries are just something that rarely warm good and often aren't worth saving. However, I packed up every one of those truffle fries and heated them up and had them later in the evening. It's the first time in a long, long time that I ate leftover fries. Actually, I ate half the fries and just half the burger -- the portions are pretty huge. The other half of my Truffle Mushroom Burger and the remaining fries were warmed up for hubby - a major mushroom lover - and he gave it the thumbs up as well. I know I'll be back there on a future trip to Wrigleyville for a Cubs game and I CANNOT wait!