Get a taste of Germany at Chef Klaus' Bier Stube

I'm married to a German guy. His dad immigrated here from Berlin as a teenager. So, when I stared dating him way back in high school, I was introduced to German food. We often went to dinner at a restaurant in Elmhurst, Illinois that is sadly no longer there called the Heidleberg. My husband and his dad had been going there for years. The food was excellent. There was always an accordion player in the corner who had a round of about a dozen songs he'd play over and over -- among them was Edelweiss, which I have no problem hearing over and over and over. There was a deli upstairs where we'd always get sausages, imported beer, breads and desserts to take home. Boy, I miss that place. We've been to a handful of German places since then that are all pretty good, but I still miss that place where I was first introduced to such specialties as wiener schnitzel, saurbraten and kasseler rippchen.

We've been out to the Peotone Beirstube several times and I've loved the food there. We've only gone for lunch when the place is more subdued and never been there on a lively weekend for the live music. This past week, to celebrate our wedding anniversary, my husband I went for lunch at Chef Klaus' Bier Stube in Frankfort, Illinois. My husband had been to the old location once. So, it was a first at this place for us both. It's quite different than the Peotone location, which I'm told is owned by Chef Klaus' son. The Frankfort location is a bit more upscale with a larger dining room, a much larger menu and the fantastic decor. The walls are lined with steins and German war memorabilia. There's a lot to look at while you wait for your meal.

I'm not real adventurous when it comes to beer. I like mine light and mild and I went with a familiar name - Warsteiner. 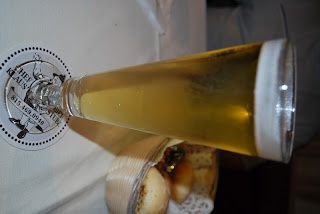 My husband is always looking to try a beer he hasn't had before. He got the Konig Ludwig Weissbier. I guess he liked it. He had two. 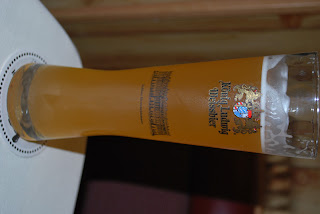 This made me laugh. It's printed at the bottom of the beer list. :) 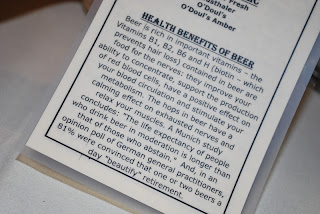 Ok, so I almost always get the same thing at German restaurants - potato pancakes with apple sauce and sour cream, wiener schnitzel, German fried potatoes and red cabbage. So, as usual I ordered two potato pancakes for an appetizer. Good stuff! 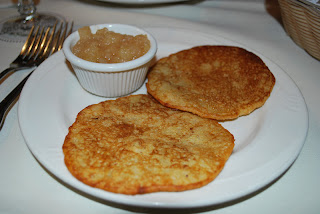 My husband opted for an appetizer of stuffed portabello mushrooms covered in a spicy hollandaise sauce. Oh. My. Gosh. It was absolutely amazing! While I'm not usually big on spicy stuff, this was just the right amount of heat and blended well with the tender mushroom. I abandoned my potato pancakes and dug into his appetizer, which as you can see was definitely enough for two. I could easily order it as my entree and leave completely satisfied. But, after this goodie...we still had our entrees to come. I'll write about them in another post. Until then, savor this picture...and be sure to try it if you head to Chef Klaus'. 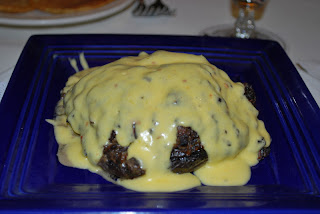