A bite of burger

I really don't eat hamburgers between the months of like October and March. That's because here in Chicago, that's usually the point that it gets too cold and windy for grilling. When we do have burgers, they aren't anything dazzling. But they could be...the potential is there. Really, the burger is a mere foundation, an open canvas for whatever you choose to pile on top. I've noticed lately that although I often have a variety of condiments piled high, there's so much more out there...cheeses to melt, veggies to slice, sauces to slather on. I vow to do better next time. 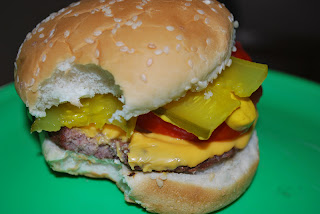