I was excited to get an invite recently to a media event to introduce the new summer menu at Seasons 52. I'd been to an event earlier this year for the opening of the Oak Brook location and that meal ranks up there in probably the top 10 I've ever had. Now it's summer and that means a shift in the menu at Seasons 52, which has seasonally inspired menus with fresh ingredients and believe it or not, less than 475 calories for each menu item. I posted last week about the flatbread and wine pairing served during the cocktail reception. Now I'm moving on to the first course. 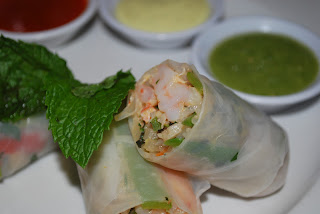 A couple years ago I attended a cooking demo with my sisters at Thai Zie Noodles and Bar in St. Charles during their Sisters Weekend and the owner, Champ, was teaching us how to make these raw spring rolls. His, of course, looked fantastic. Mine, not so much. There's quite an art to getting these rolled exactly the way you'd like them. Anyone who has mastered that deserves a high five. But, when someone can not only excel in the presentation, but create a refreshing appetizer like this that is stuffed with lobster, shrimp, carrots, peppers, cilantro and bean-thread noodles - I hope I got that right...I did ask the server, but my handwriting isn't the best! :) - they probably should also have a big bear hug coming. The dips were each so different, yet all of them screamed "Summatime!!" I think the aromatic lemongrass was my fave. 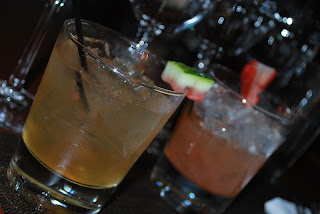 Paired with this course was Hirsch #1 Gruner Veltlier (Kamtal '09/'10), but in keeping with the summer theme, we also got to try out a couple of warm-weather cocktails. The first was the Watermelon Refresher, which was made with Atlantico Rum, agave nectar, lime juice and crushed watermelon. The Strawberry Lemon Refresher included a darker version of Atlantico, lemon juice, agave nectar and strawberry.

As we sat down to begin dinner, we watched a live stream with Seasons 52's culinary director and master sommelier and when they told us about the drinks, they cut to a message from Enrique Igleseas with a thumbs up for the rum and some nice word about his favorite restaurant. Cute touch.

Well, that's it for now. Watch for an upcoming post on the second summer course.