Stephano's pizza bread takes me back


Years ago, a pizza place opened up in town called Stephano's. Their pizza quickly became one of my favorites and we ordered it often. Years later, one of the owners joined a club I was in and we became friends and later our kids attended preschool together. I was heartbroken when they moved out of town and re-opened quite a drive from here.

The local business stayed, but had new owners. As sometimes happen under new ownership, things changed a little. The name was the same, but the food wasn't quite the same. After a couple orders, we just knew it would never be quite the same and started ordering our pizzas elsewhere.

A couple weeks ago, while running errands with one of the boys, we were driving past and I stopped to go in and get a slice. They didn't have any slices ready, but assured me it wouldn't take too long to order a sandwich or another menu item. I learned the place is again under new ownership and ordered a couple pizza breads to go. A lot of times, places won't make pizza bread with sausage because it's hard to get the sausage cooked enough without burning the bread and cheese. Somehow they managed to get it just right. The sausage was perfect as were the cheese and the bread. I'm glad I happen to stop and give Stephano's one more try. I'm not sure if I'll even go back to the pizza when I place an order there. I may save it for pizza bread only! It's worth a trip just for that. It takes me back to the early days of the business when I could order with confidence and know it was going to be awesome. I think it's heading back in the right direction. 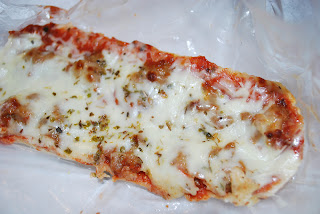