The birthday cake from Portal

My son turned 13 the other day. That makes two teenagers in the house. I think once they get past the age of say, 10, when the Chuck E. Cheese and bowling alley parties tend to go by the wayside, it's even more important to make them feel special. I've always made a big deal about birthdays. OMG...for my oldest son's first birthday, I'd rented a helium tank and the house was filled with balloons. We had a couple cakes. Tons of food. Games. Goodie bags. Rented a bounce house. Had a pinata. All for a party that he pretty much slept through since he was still taking a three hour afternoon nap.

When he turned 4, Toy Story was big. In addition to all of the above, I had a big banner made with Woody and Buzz on it and had a cowboy come and do rope tricks. I've gone a little overboard when they are little. Once they get to junior high, birthday parties with the buddies seem to fade away. So, as they get bigger I try to still do things to make them feel special and know that their birthday is an important event.

The birthday boy had put in a request months ago for a "Portal Cake" for his birthday. For those who don't spend time with teenage boys and aren't in the know - Portal is a video game and I guess there's a cake that you are trying to get to. That's what he wanted. He led me to this site for instruction on how to make it:

I admit, I cheated. I used a box mix. I'm sure it would be even better made from scratch.

So, here's what I did, taking a look at a few of the cakes I'd found online.

2) Place first layer on over sized platter. Spread a layer of chocolate pudding on top. Add second cake. I put mine upside down to leave a flat surface on top.

4) Press slivered almonds into side of cake all the way around. 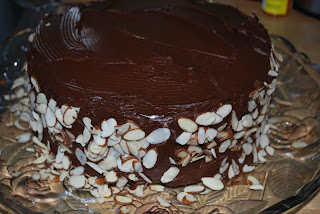 7. Put maraschino cherries in strainer and rinse with cold water.

8. Place a cherry into each dollop of whipped cream. 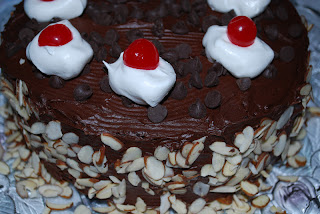 9. Add a single candle in the middle to complete the "Portal" look. 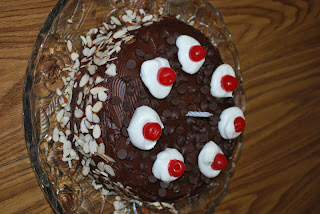 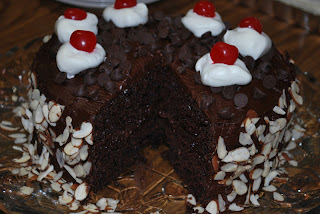 The birthday boy was so pleased with his cake that when he first saw it, I put my hand up in the air for a high-five and instead I got a big hug. Those are sometimes hard to come by from teenage boys.  :) 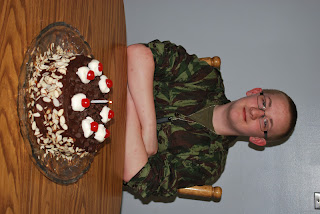 And...I had made two boxed cake mixes because I wasn't sure one would be enough, so the leftover batter went into a foil brownie pan. My son is also a huge fan of Chuck Norris. BIG TIME! He idolizes the guy. So, his big brother printed this off and added it onto the cake for him. So, he got two cool cakes out of the deal. 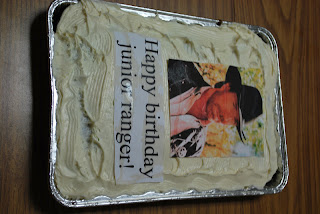 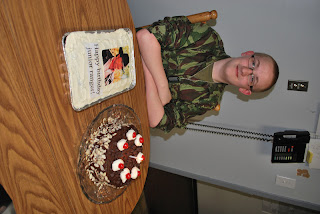