No ho-hum for this boxed lunch

Ok, I know I sometimes overdo it with taking pictures of my food. Why would I take a picture of an ordinary catered boxed lunch? Because this one was spectacular. A chicken Caesar wrap in a spinach tortilla, pretzels, an awesome pasta salad with lots of veggies and shredded cheese that I really want a serving of right now! and a frosted brownie for dessert.

It's what was served at the Hearts at Home Conference that my sister and I attended in March. You know it was good if I'm still thinking about it two months later! 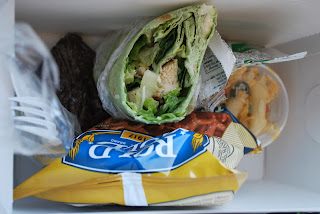