I'm a big time Cubs fan and attend a few games each year. At my most recent game, one of my fellow Cubs fans who attended the game with me ordered this - a barbecue pulled pork sandwich. She gave it a thumbs up and it was big enough that she and her dad split it. I think the price tag was about $8, so it's a good thing it was satisfying. I didn't give it a try, but it sure looked good and was served with a little side of slaw. The food options at Wrigley Field have improved over the years. You still can't go wrong with a good old hot dog. One of these days I'll be brave enough to try the bison dogs that have been served there the past couple years since the Ricketts family (who own High Plains Bison) took over. 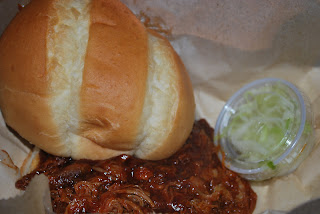 Let me just give you a little background on what led me to this game. Here's who I was with - my dad, my friend, Celia, and her Dad. I met Celia a few years ago by mail. I'd gotten her name when my son and I were sending out care package to random Army soldiers. After sending some packages, we kept in touch via e-mail and I learned that Celia was also a Cubs fan. Once she returned home from a deployment to Afghanistan, I offered to get her tickets to a game. When the season started last year, I got in touch with her to let her know that my sister, who is a season-ticket holder, offered to give me a set of tickets to pass on to her. She asked if I'd be able to go to the game so that we could meet face-to-face. So, I asked my sister if she could get us a couple more tickets. Celia and her son attended and I went with my then 9-year-old. It was great to meet her face to face. It was their first game. This year, when I checked to see if she'd want to go again, she said she'd like to take her dad, who had never been to a game. So, looks like this may be an annual thing. :) It sure is fun. Good company, good food. And it was an exciting game with back-to-back home runs. And the Cubs even won. 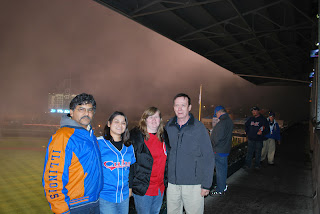