Over the years, my sister has had several foreign exchange students. Most have been from Asian countries and it's always such a pleasure to get to know them. It's also fun when they bring you some tastes from home. This was some coconut candy brought from her Vietnamese student. One of my son's really liked it. The other was putting a few pieces in his lunch each day after he told me he didn't care for it. Turned out his classmates did like it and he was bringing it for them. It's so nice to get a taste of other parts of the world through their visits, both figuratively and literally. 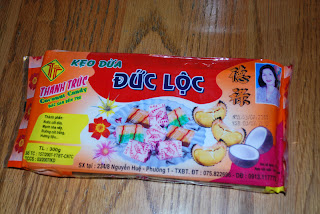