Disclosure: Our meal was provided. I was not compensated for this post. All opinions are my own.

On a recent visit to Fort Wayne, we made it a point to hit some breweries. There are 20 on the Northern Indiana Beer Trail and we went to three. We went for the beer, but were also wowed by the food. 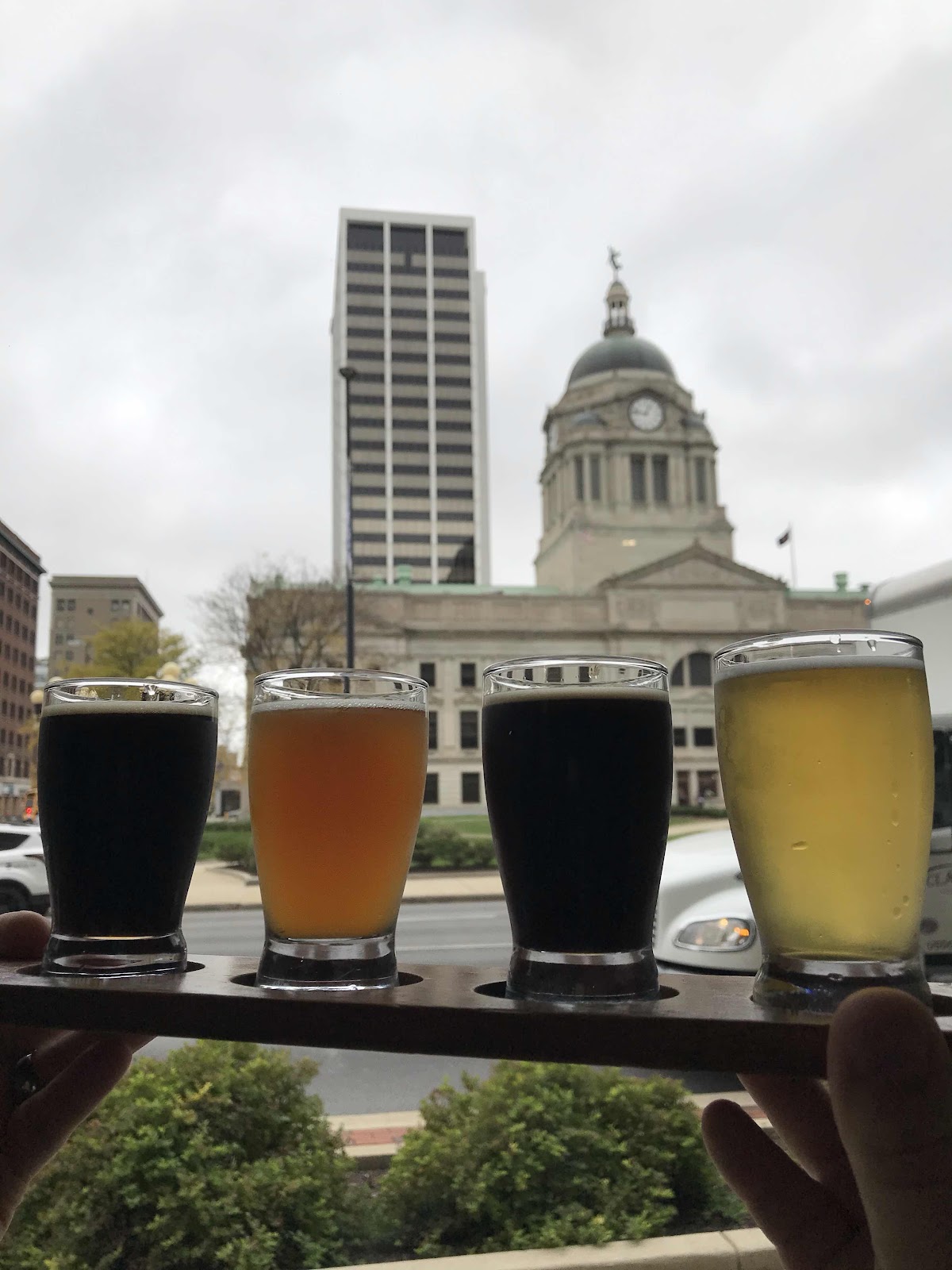 The Hoppy Gnome Restaurant and Taproom is part of Gnometown Brewing Company where we had lunch during our trip. We had a window seat directly across from the courthouse - and it also made a nice backdrop for photos. We tried a flight of four beers on tap, which were all good. 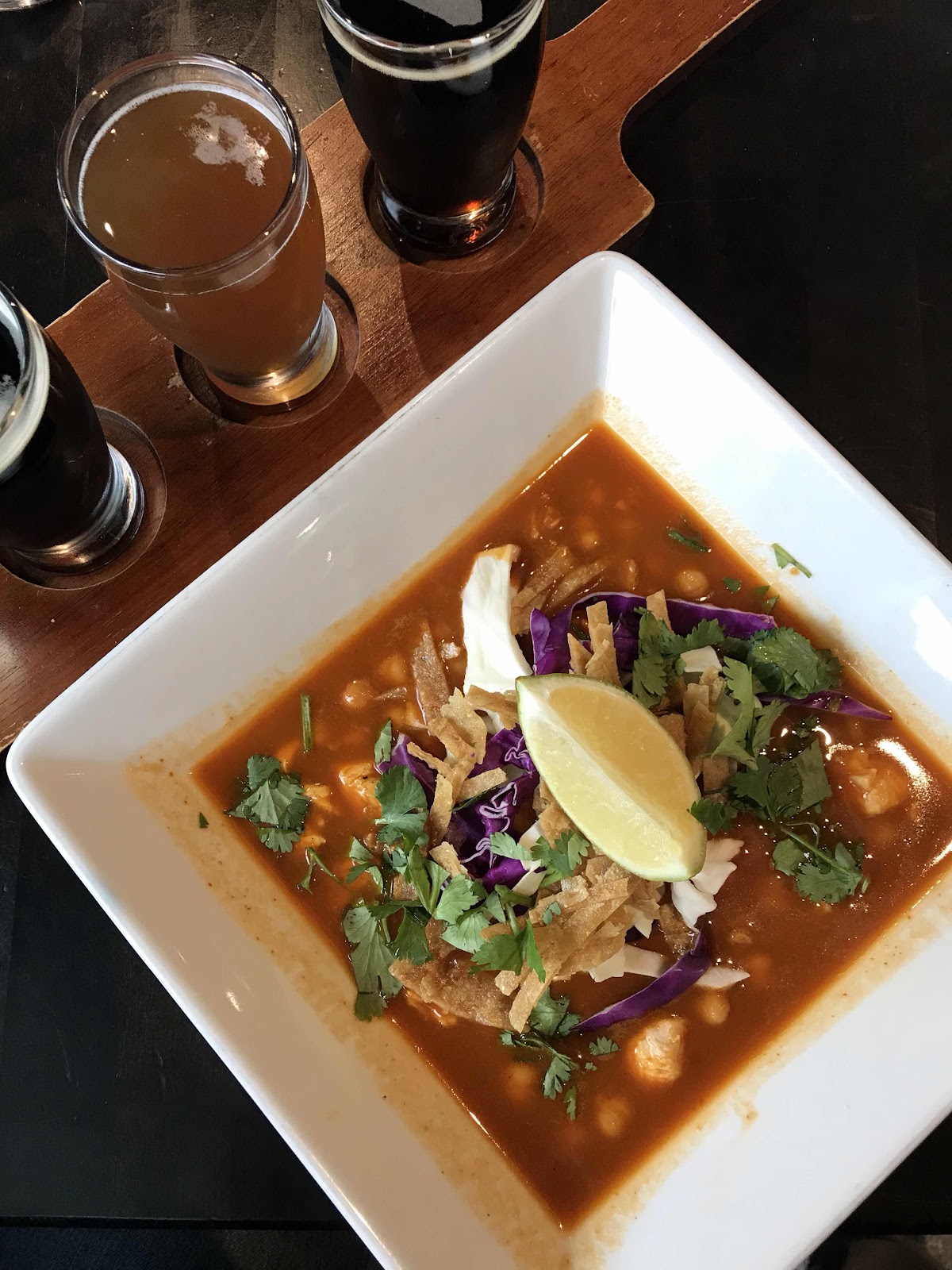 It was a chilly and rainy day, so first thing I did was look for some hot soup on the menu. I saw that they had chicken pozole and had to try it. It comes in half or full size. I ordered a half size since I planned on having an entree as well and it was more than enough. It had just the right amount of kick, generous amounts of tender chicken and was garnished with crunchy tortilla chips and cilantro and I loved every single bite. Been dreaming of that ever since and I'll have to be on the lookout around home to find something that compares to it - wish me luck because I'm not sure I will. 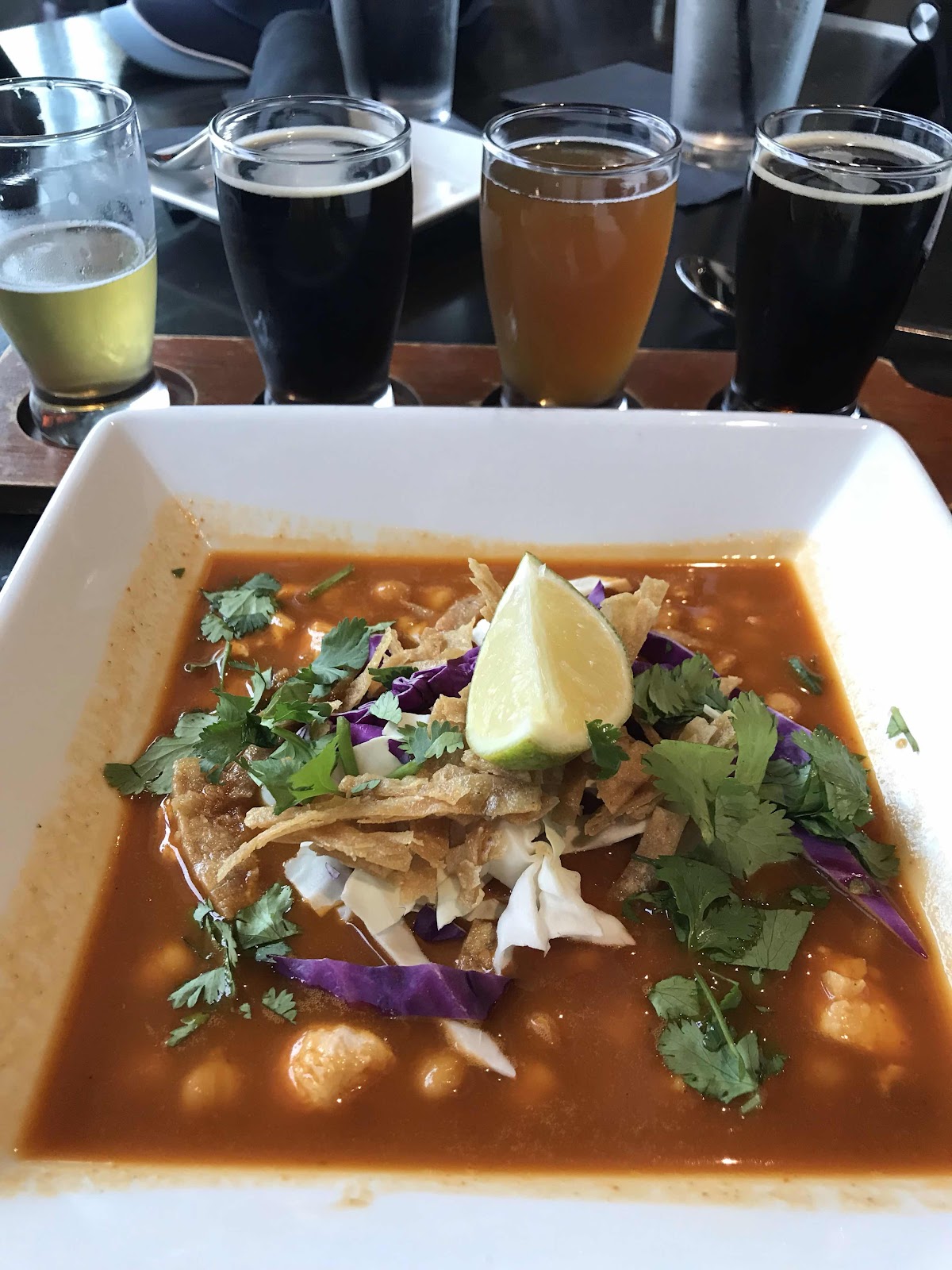 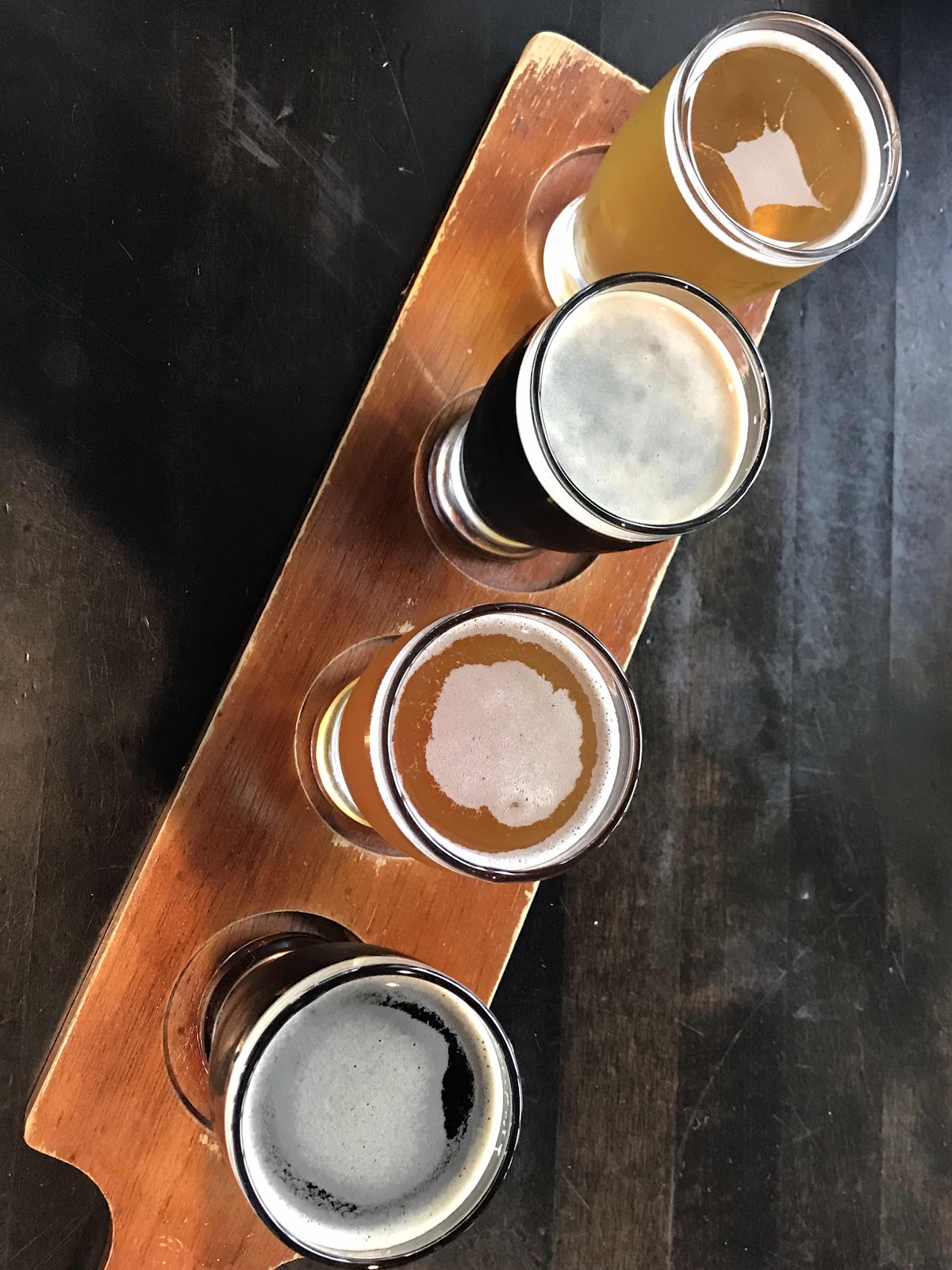 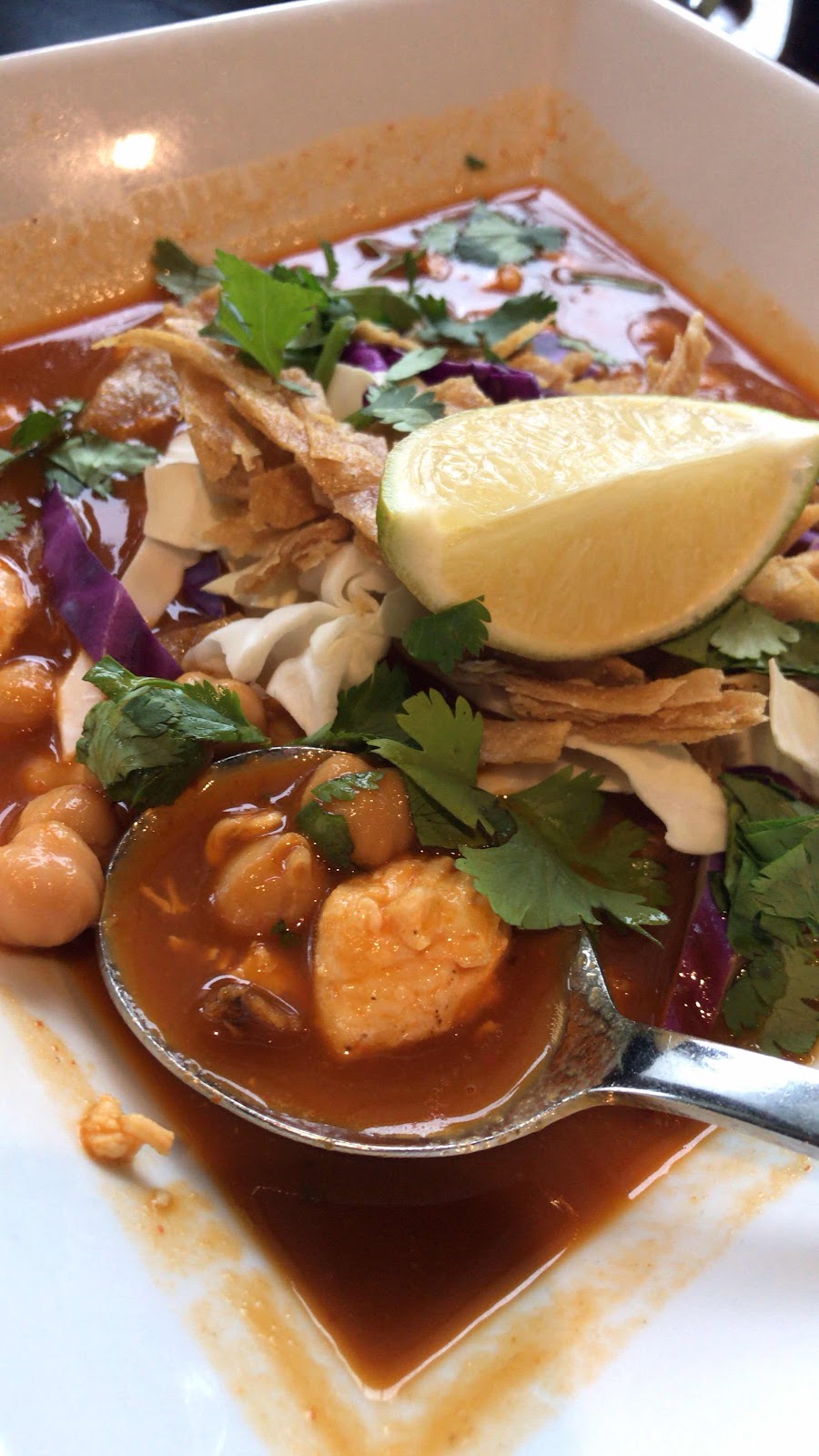 Hubby went for the smoked brisket torta, which came with either a side salad or dirty rice. It was a large portion of smokey meat with an onion and pepper mix on top with a zesty sauce. And it wasn't the type of roll I'm used to on a torta, but I loved this long, crusty almost baguette-style bread. 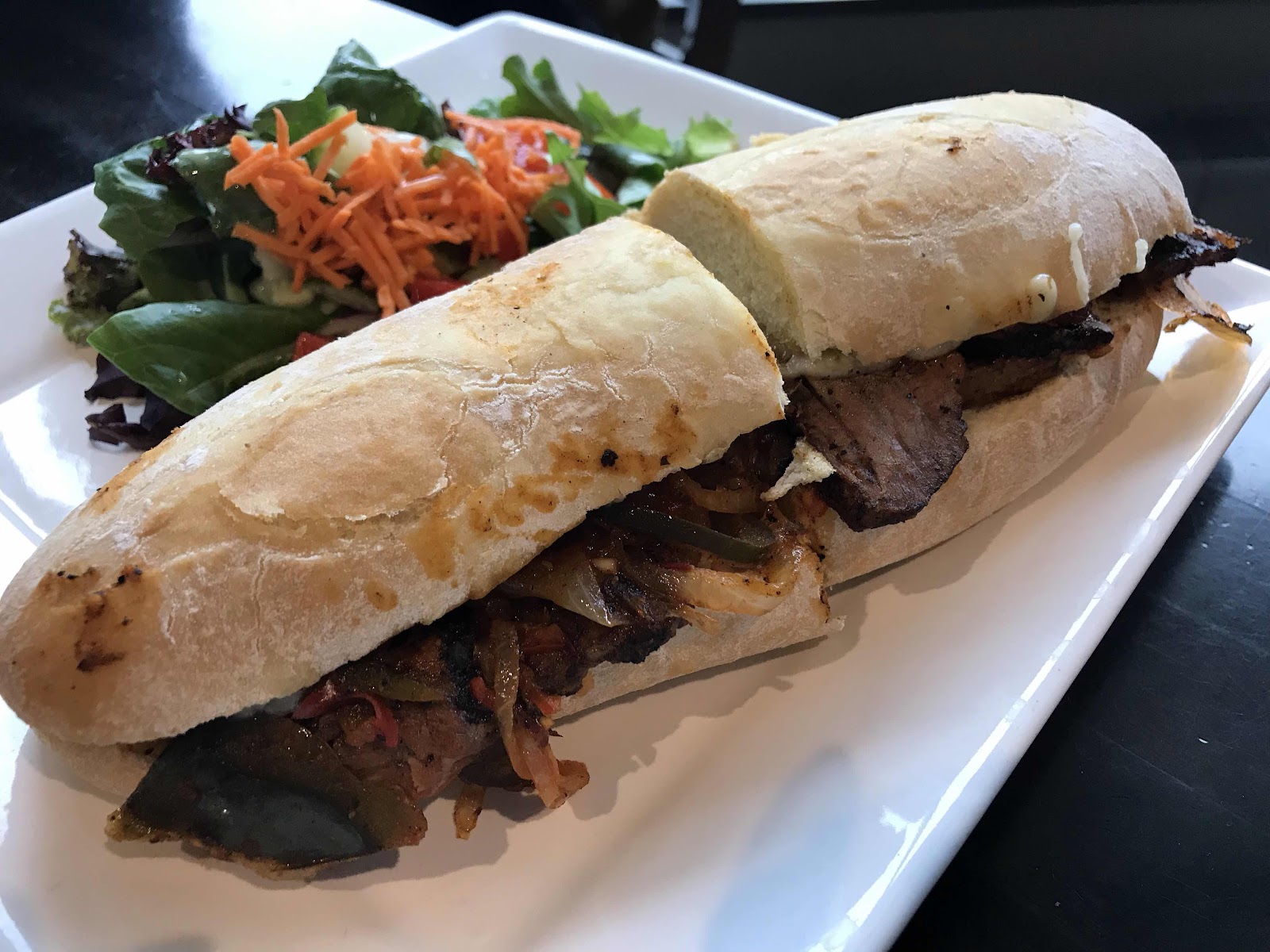 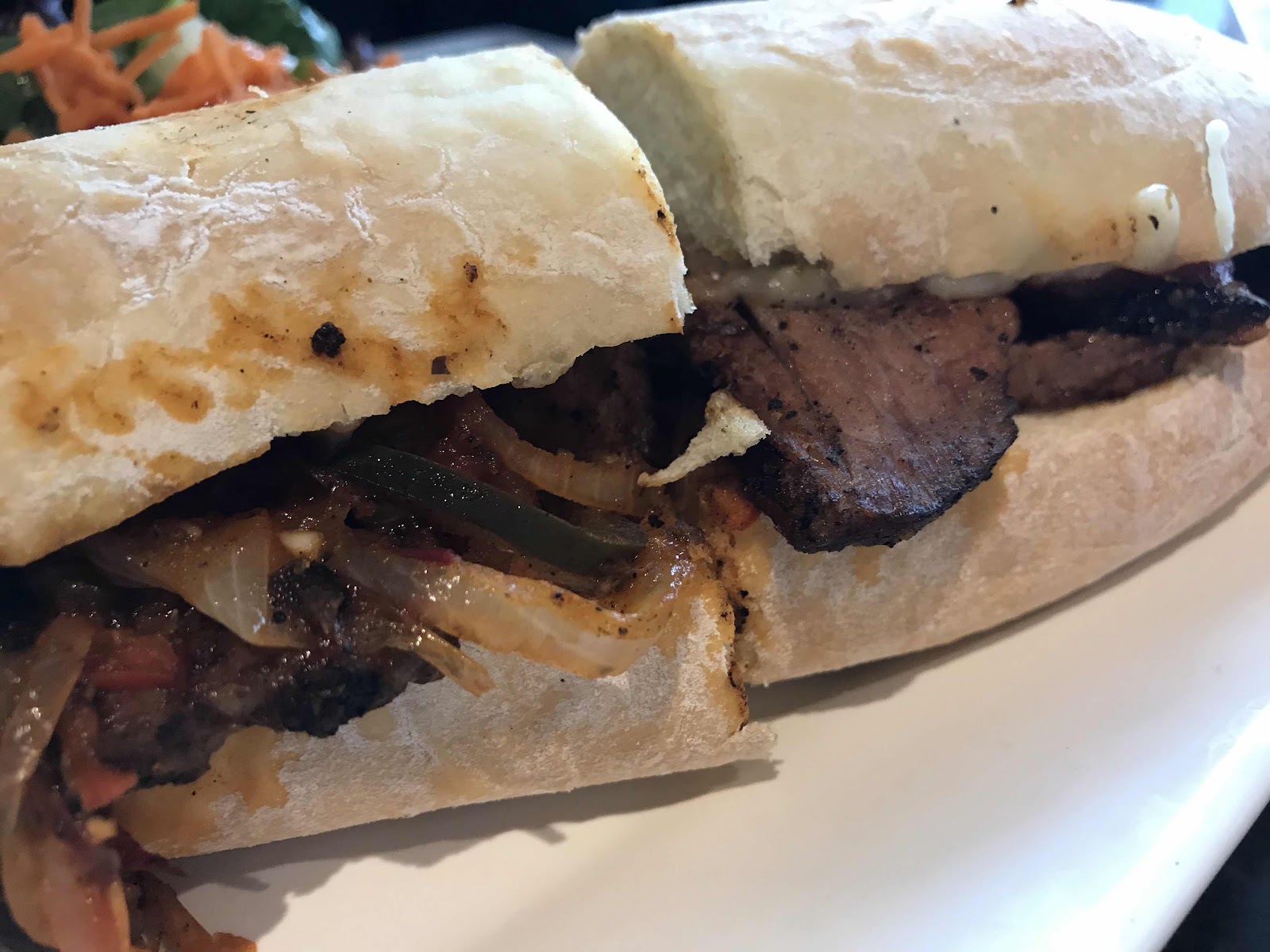 I decided on the pan-seared scallops and they knocked this out of the park. The scallops were cooked to absolute perfection, melt in your mouth, but with a beautiful outside sear. This was a lunch portion. The dinner portion comes with four. Under it was what they call "hoppy hash" and it was so flavorful - and it had lots of bacon in it and we all know bacon is like the best bonus there is. It also had a jalapeño tartar on the side for dipping and it gave it a nice zing without being too much (I don't do super spicy and this was just right for me). 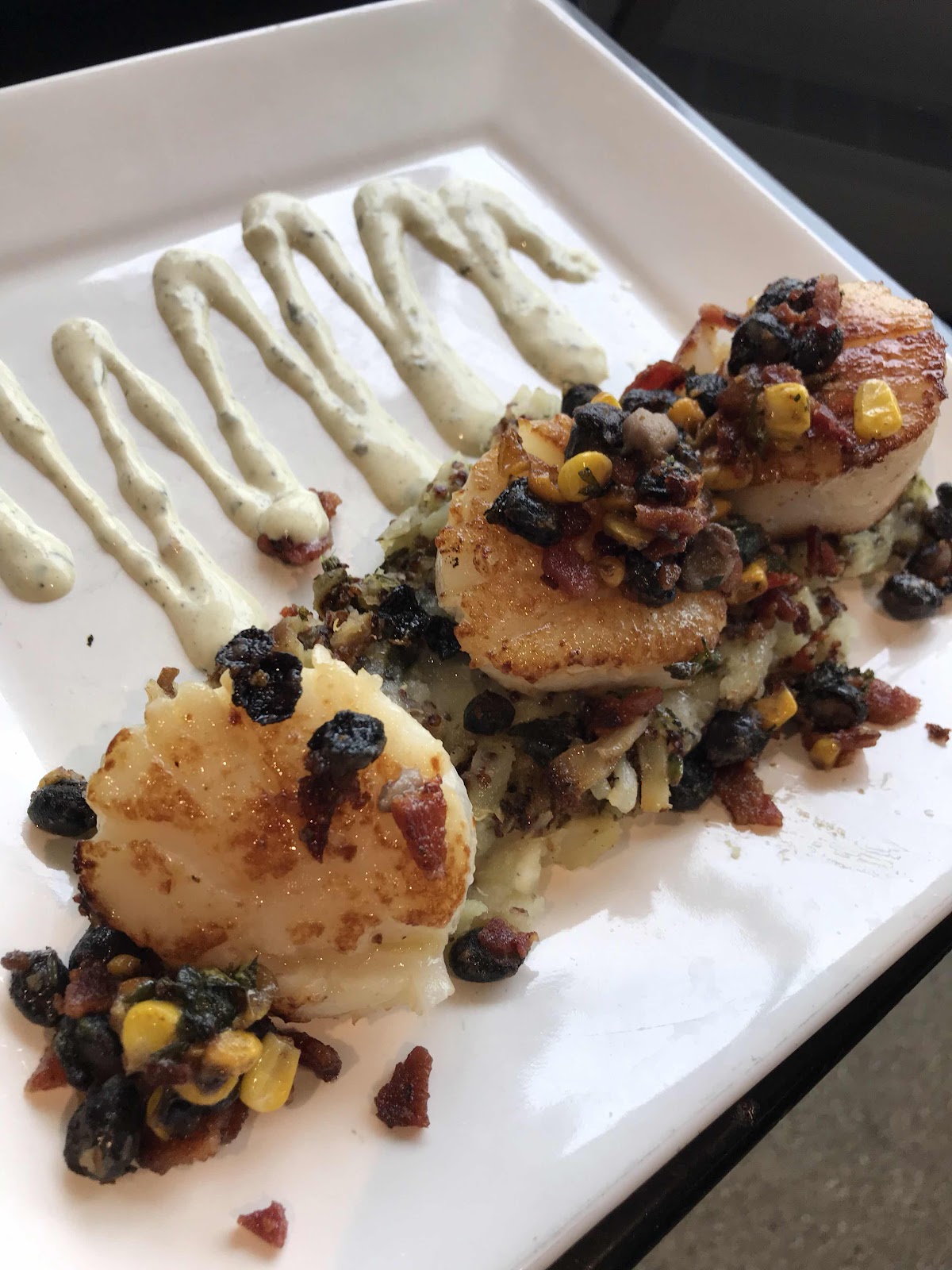 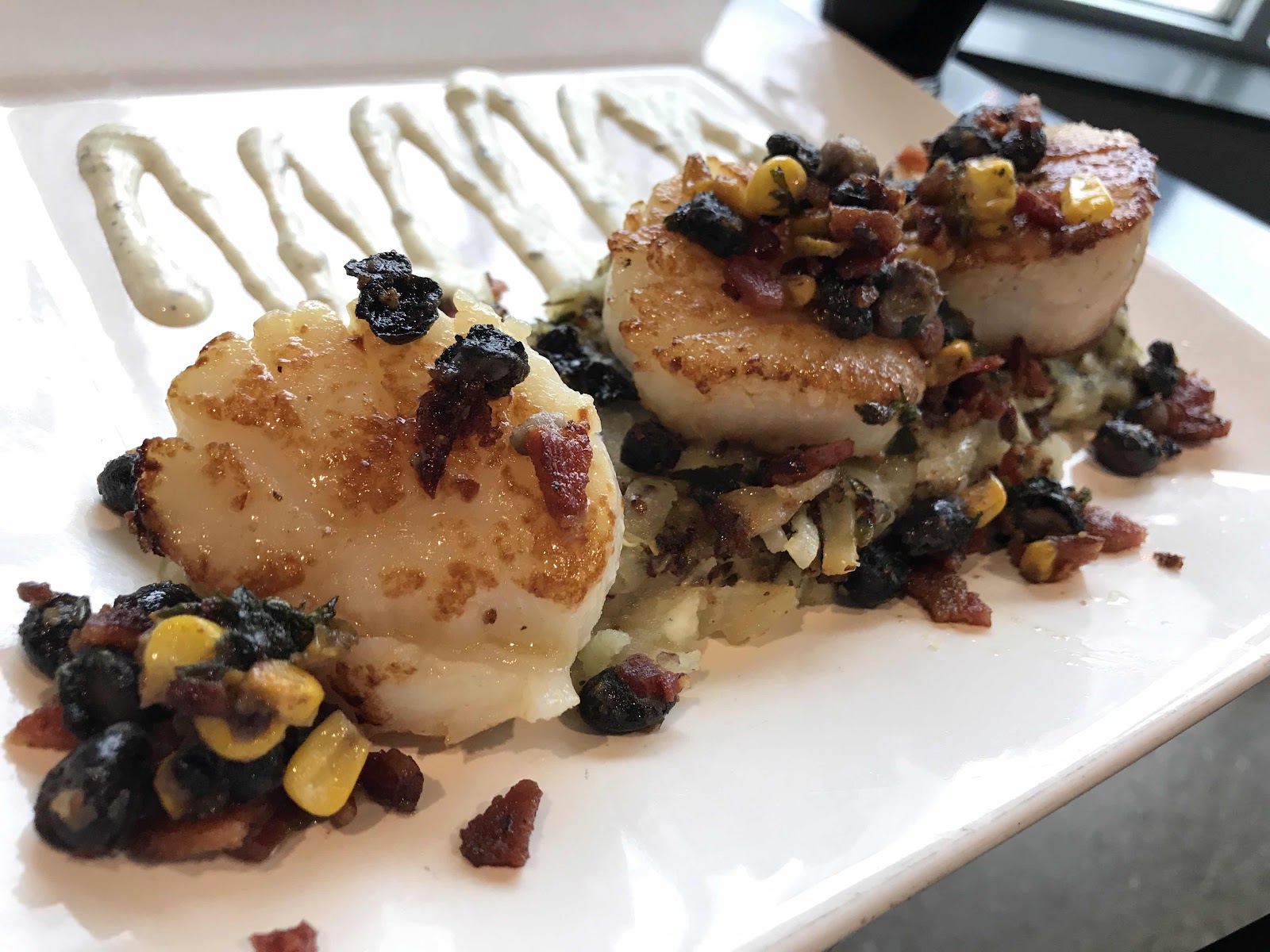 One last note is that they offer beer making classes there where you can brew your own beer. How cool is that. They provide the supplies and you're guided through it by a master brewer from mashing grains to adding hops. After you're done, the beer ferments for about two or three weeks and you end up with your own 1/4 barrel keg or bottled beer with custom labels. It's a very cool opportunity that I think would make a great Christmas gift for a beer afficiando. For more information, visit gnometownbrewing.com. For more on the gastropub, go to hoppygnome.com. 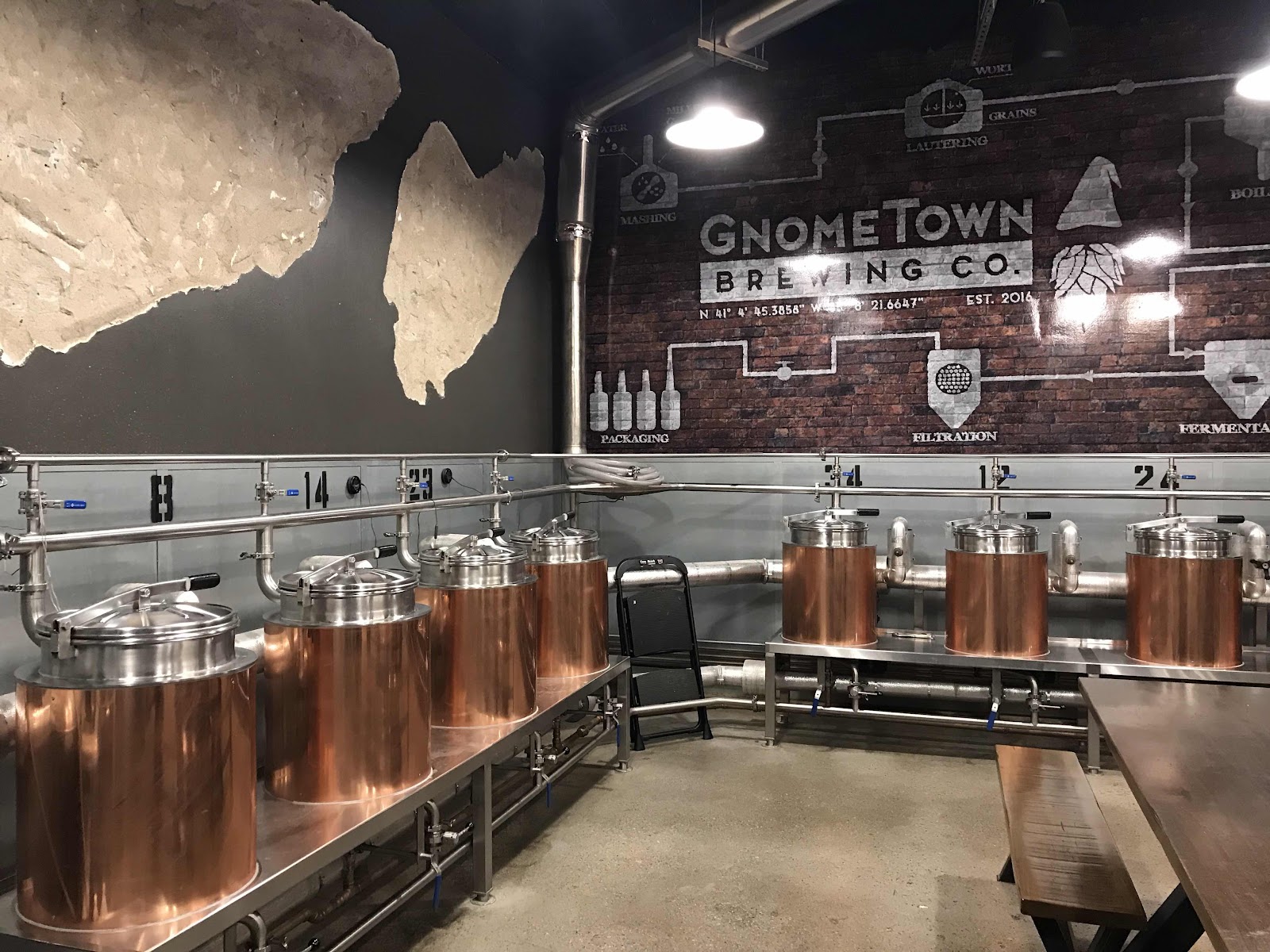