There's this fabulous restaurant in Valparaiso, Indiana called the Silver Spoon. They serve spectacular breakfasts. On a visit there I had a Green Goddess Omelet that I loved. It has spinach, feta and tomato and was topped with pesto. They also have a wild mushroom and goat cheese omelet. Today for breakfast I thought about Silver Spoon and decided to have an omelet, so I kind of combined the ingredients of both of those awesome items on their menu and whipped up breakfast.

Now, what was really extraordinary about this breakfast is that it has been years since I made an actual omelet. At some point, I got tired of my omelet becoming a complete fail and falling apart and gave up. From then on, I just made big pans of scrambled eggs with ingredients added in.

I have had a page from a 2009 magazine hanging on the side of my fridge with Julia Child's tips for making a perfect omelet. So, today I finally decided I would give it a go again. I followed Julia's instructions and what do you know - I ended up with a pretty good specimen.

So, here's a step by step on my awesome omelet guided a little by the wonderful Julia Child.

Olive Oil
About 1/2 cup of spinach, chopped
About 1/2 cup of mushrooms
1/2 of a bell pepper, diced
4 eggs
Water (about 2 tbsp to add to eggs)
Salt
Pepper
A couple spoonfuls of goat cheese
1 tsp. pesto

I knew I would want to stuff my omelet with veggies I remembered from the omelets I'd had at Silver Spoon and I also wanted to include goat cheese and pesto.

First I chopped some fresh spinach and wilted it in olive oil with some mushroom and diced orange pepper (I planned on using GREEN pepper to go with the 'Green Goddess' name, but only had orange. 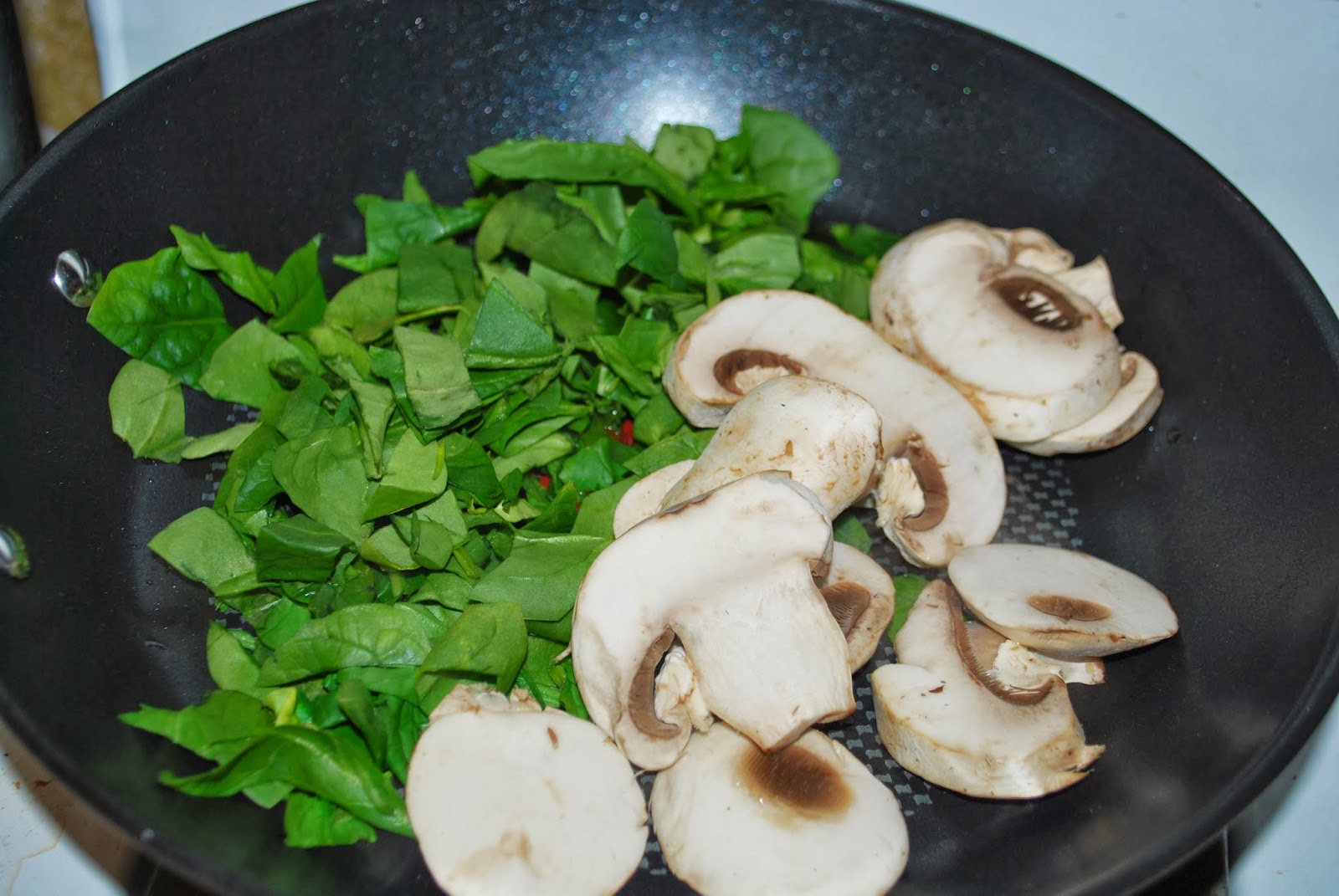 Saute until veggies are soft and spinach is fully wilted. 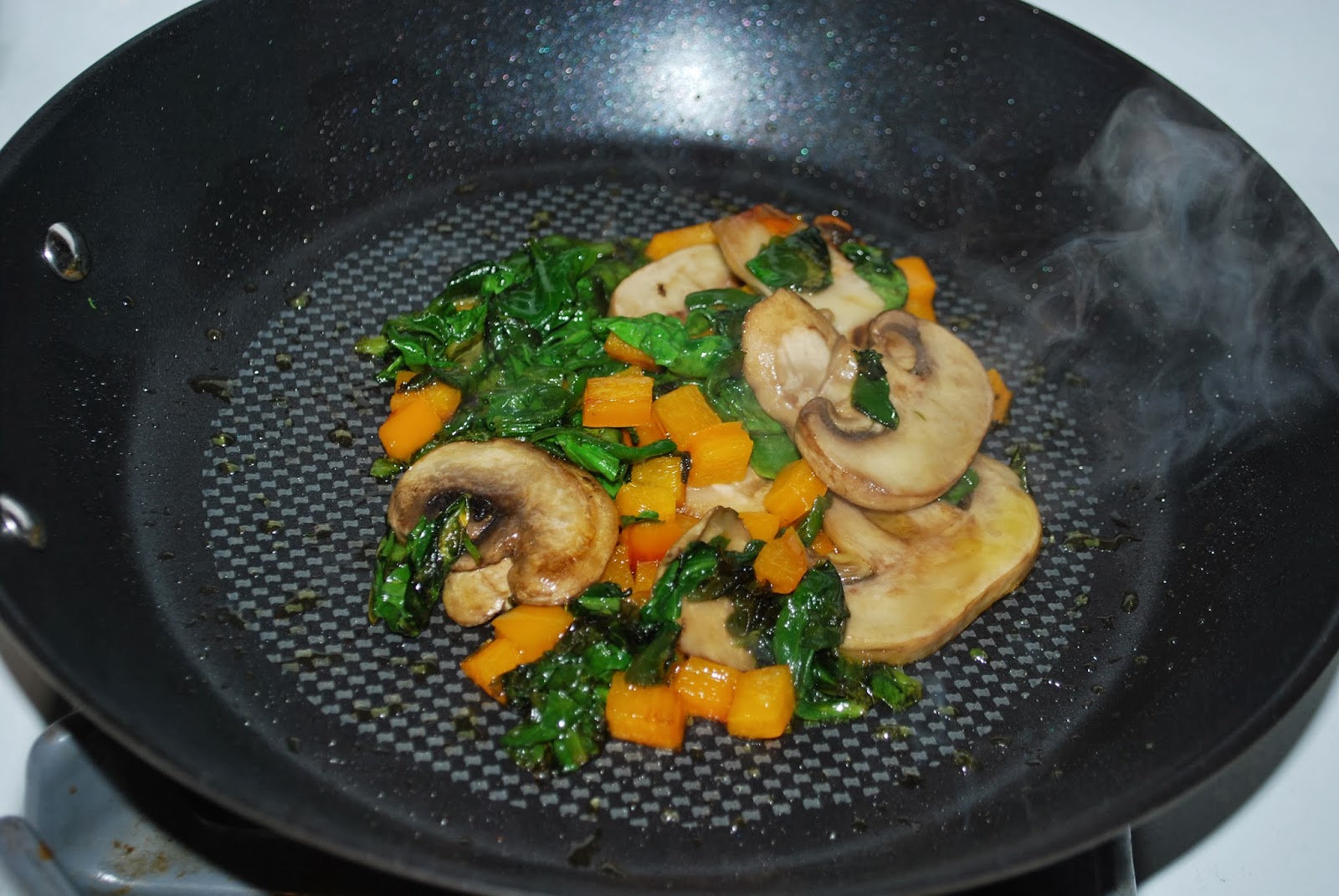 Whip two eggs in a bowl with a fork until bubbly. I added a little water, also (that's something I learned from a former co-worker named Rose who originally taught me to make an omelet one day in the lounge on lunch break. She always warned to use water, never milk in making eggs.) Add a splash of olive oil to a hot pan and pour in eggs. Sprinkle with salt and pepper. 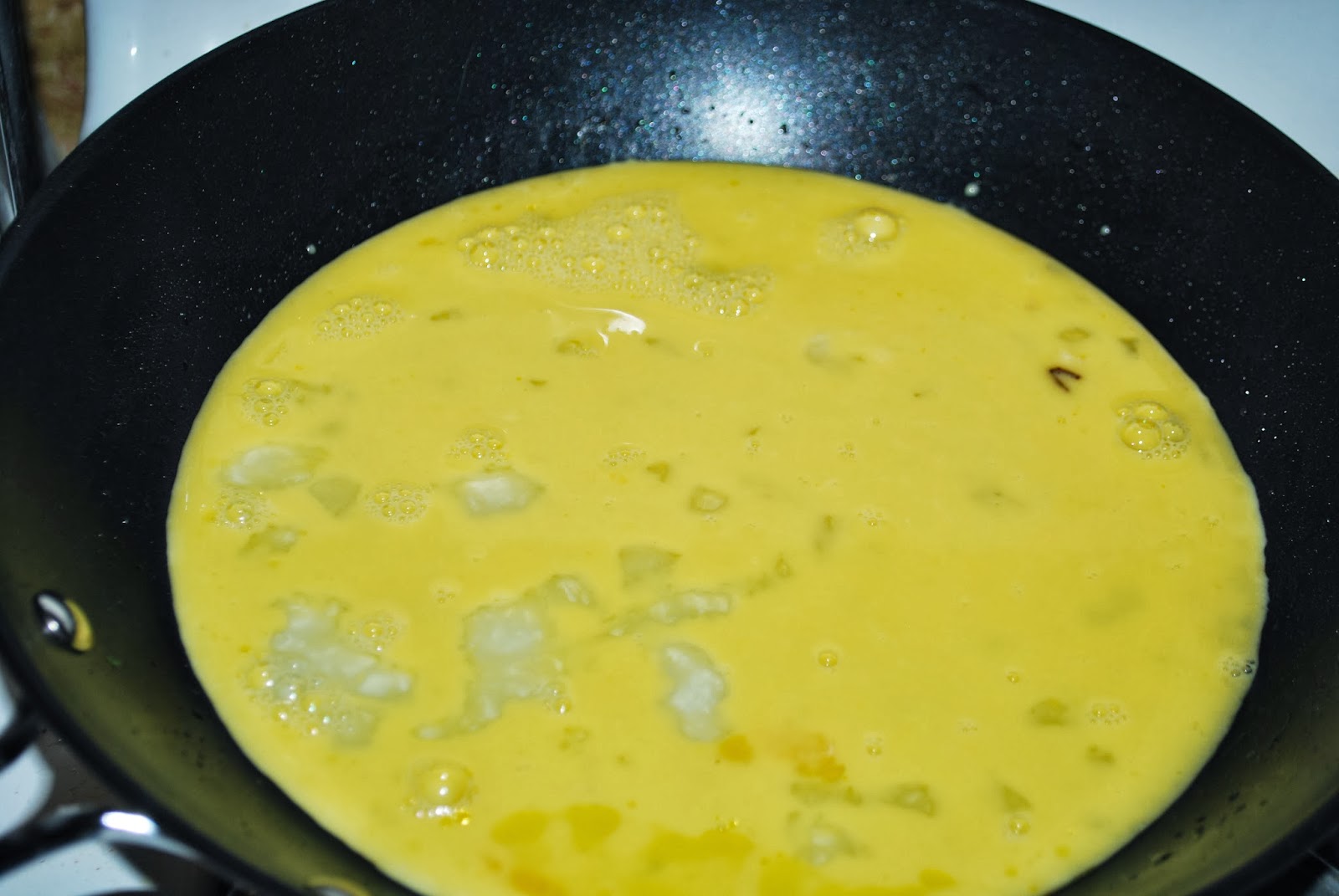 As it cooks, pull eggs from edges with spatula. Do not flip. I tilted pan a couple times for the excess liquid to run off and cook further. Keep over heat until egg is fluffy and no more liquid runs off. 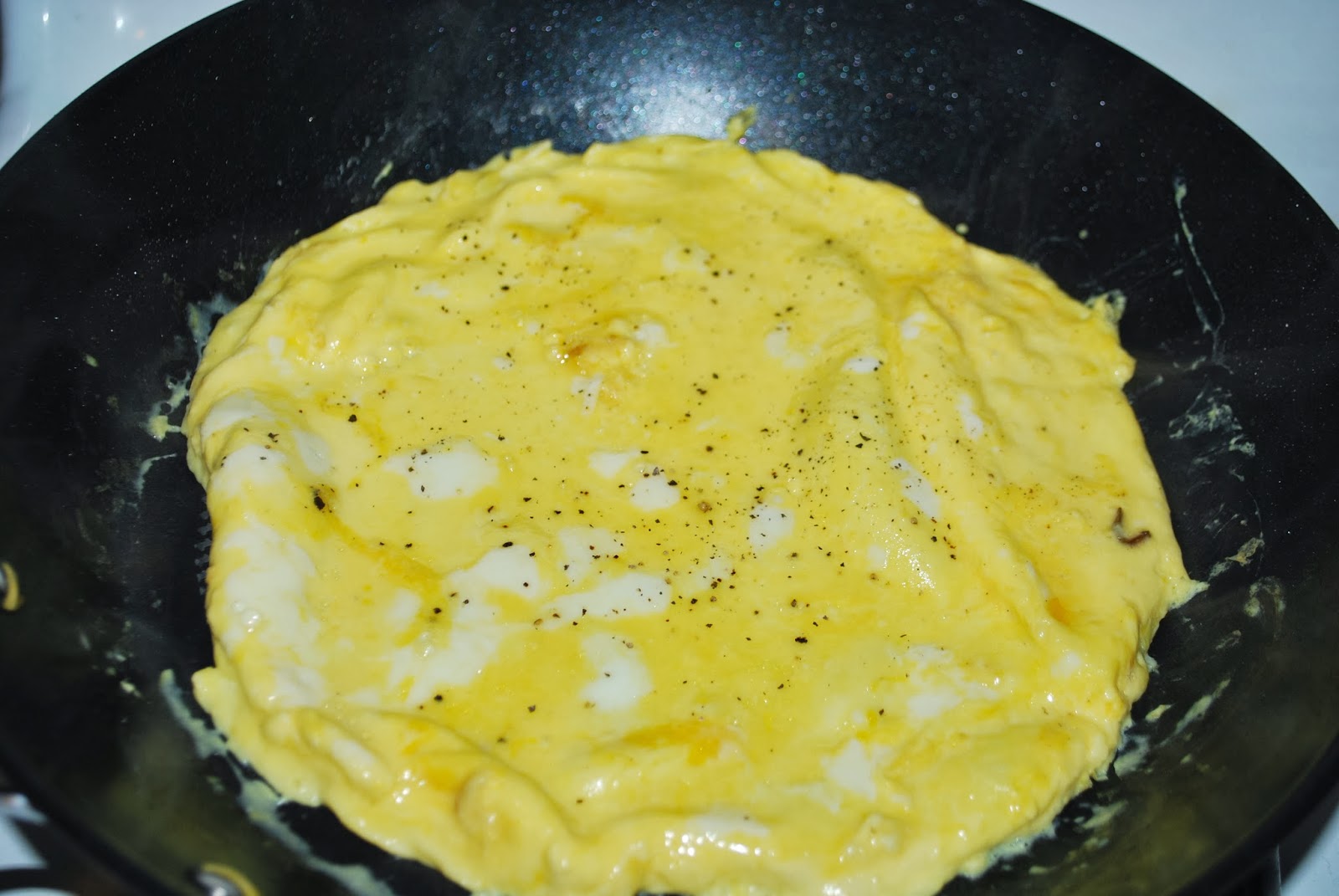 Add your filling, keeping it on one half of the eggs. I added the sautéed vegetables, goat cheese and a little bit of pesto. Flip empty half of eggs over the filled half. Carefully slide out of the pan. 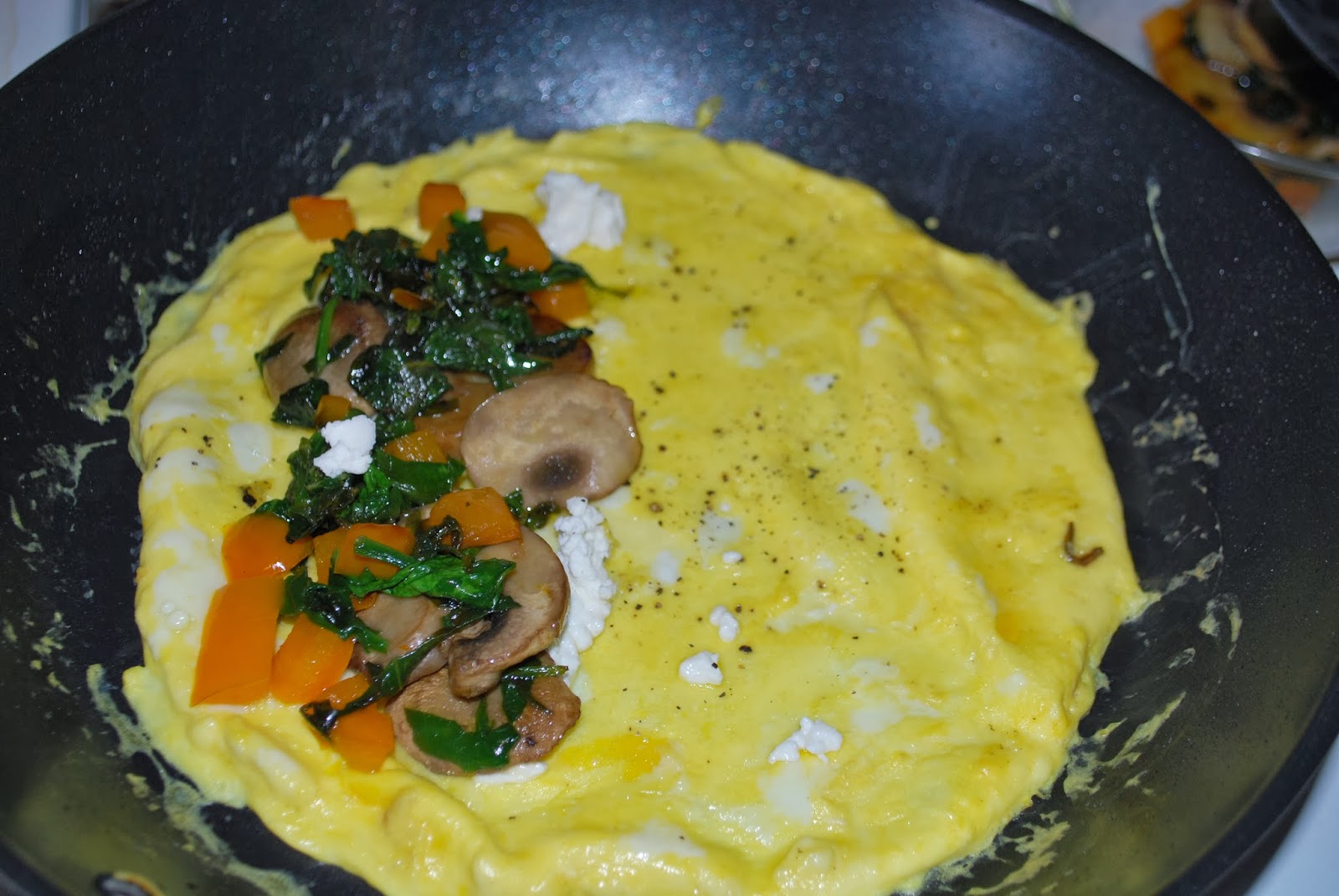 I was pleased with the results. I managed to get the omelet out of the pan without demolishing it. I must confess that I did tear it just a smidge right in the middle. I solved that by garnishing with a couple fresh spinach leaves. I also spread a little bit of pesto on top running the length of the omelet. 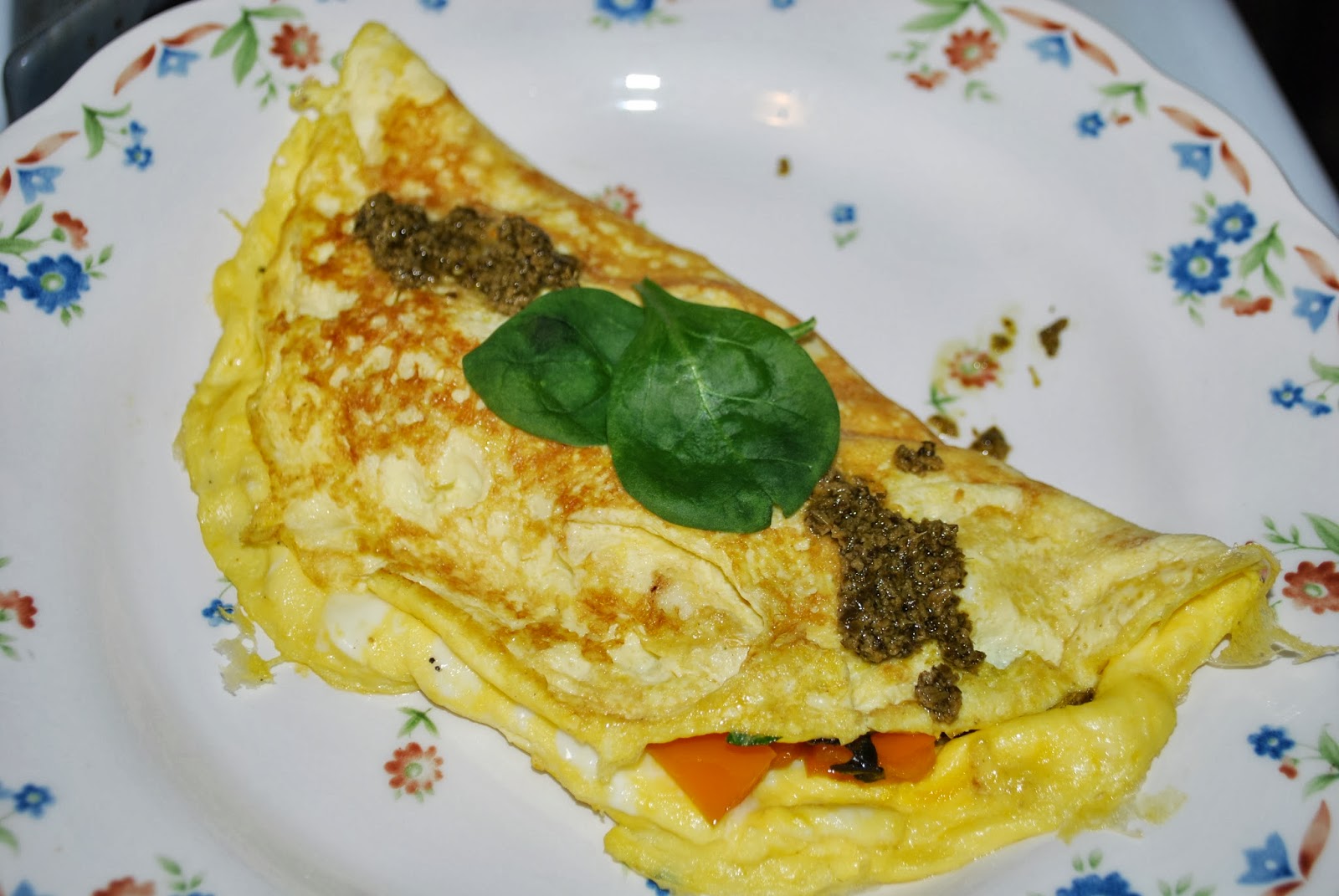 I was pretty darned pleased with my final dish. It looked decent and tasted pretty close to something I'd get at that lovely spot called Silver Spoon.