As we talked to different people as we made our way around Indy this past week, we were told about a half dozen times that we had to have St. Elmo's Steakhouse's Famous Shrimp Cocktail. We heard it from employees at the Crowne Plaza Hotel where we stayed. And from my contact at Visit Indy. And from servers at other restaurants. Everyone raved about it.

So, when we went to dinner at Harry & Izzy's, the sister restaurant and next door neighbor of St. Elmo's Steakhouse, which shares some of the same suppliers and menu items, I knew we'd have to order the shrimp cocktail for an appetizer. 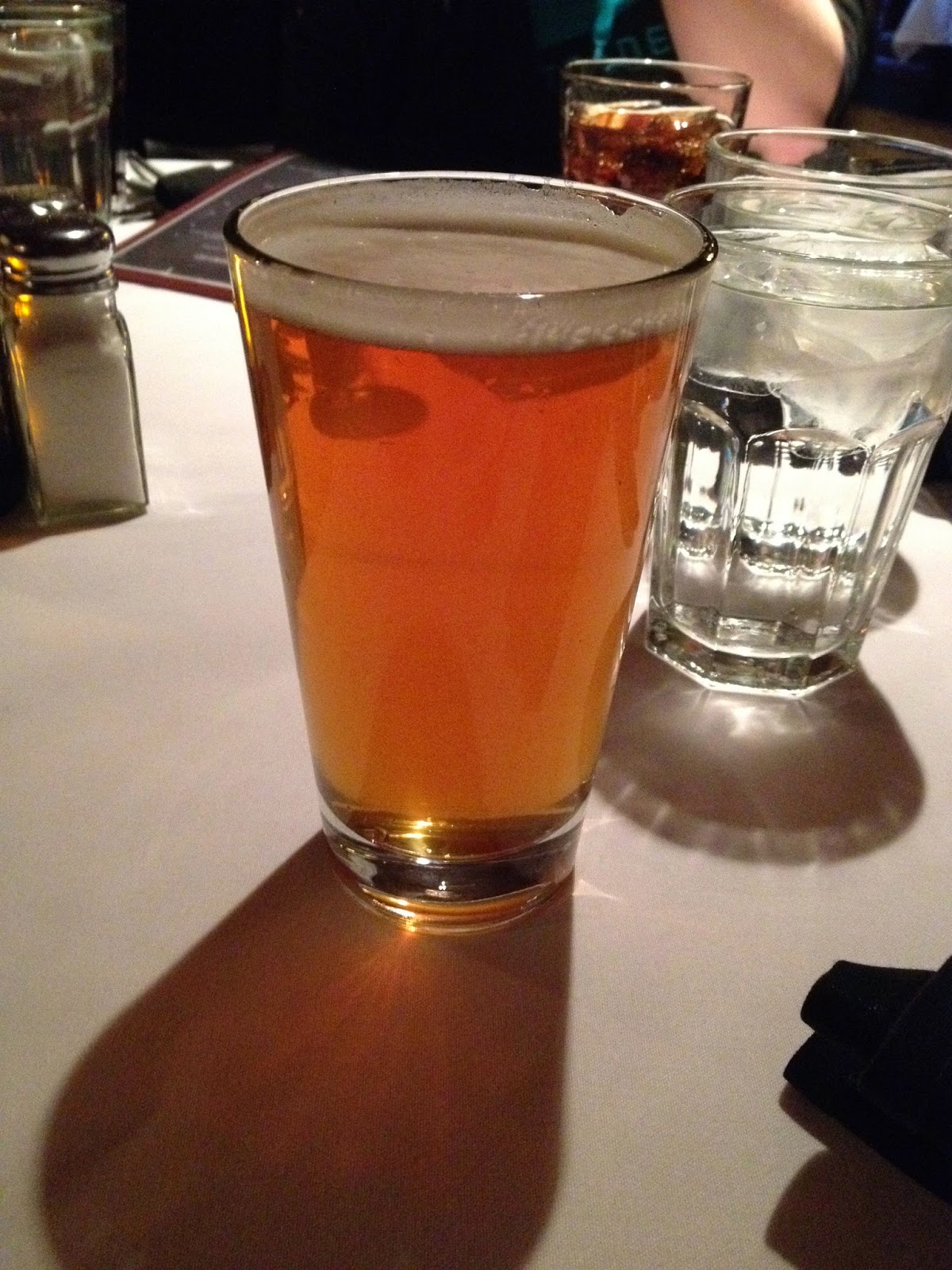 Harry & Izzy's was a stone's throw away from our hotel (we could see the sign from the hotel entrance) and we headed that way just as the NCAA finals game finished up at the convention center. I was glad we had made online reservations because a lot of the people leaving the game were also heading to Harry & Izzy's for a late Sunday evening dinner.

We got in quickly and ordered our beverages and appetizer while we looked over the rest of the menu. The shrimp cocktail can be ordered in quantities of 5, 6 or 10 and are served with a fork and lemon slice for each shrimp along with a very spicy sauce. I'm told that it's the fresh horseradish that is shaved daily that gives it such a kick. I'm also told that it helped seal the deal when Indianapolis was in the running as a Super Bowl host city in 2012.

It's definitely worth trying and is a food experience you won't forget - just be sure to have plenty of water on hand as you dig in! :) The shrimp is top quality and the sauce has quite a zing! 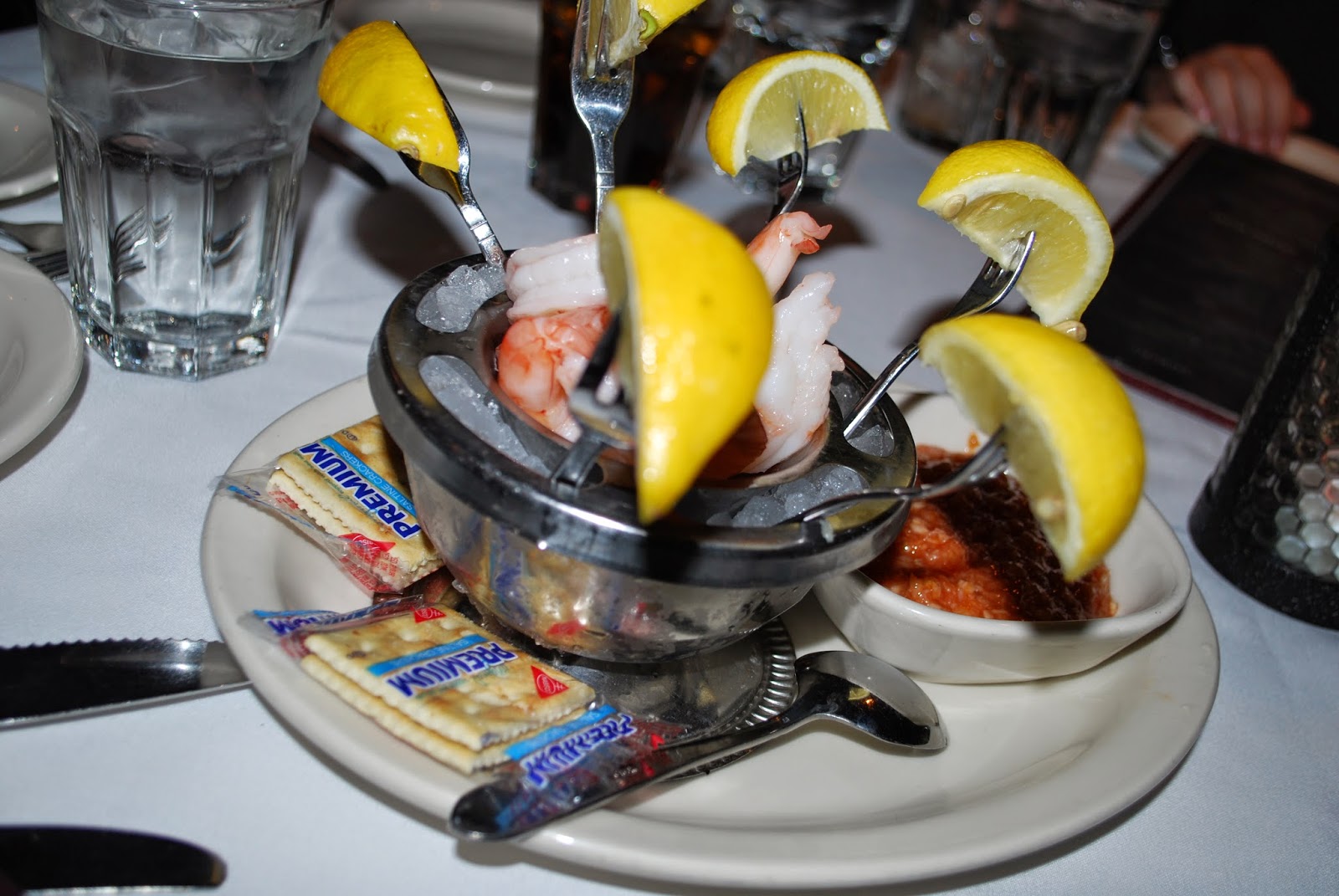 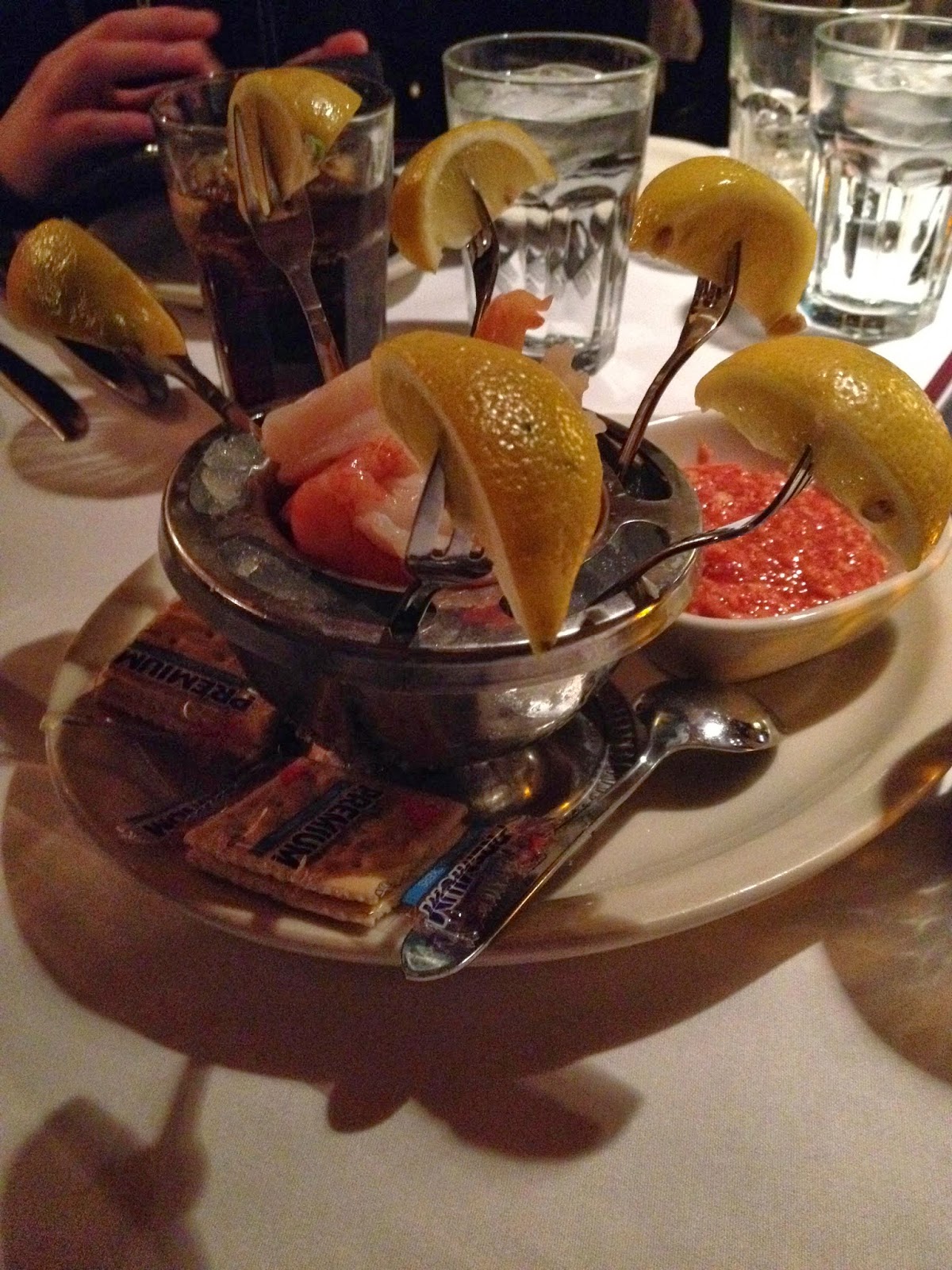 I loved the soft, warm garlic rolls that we enjoyed while we waited for the meal. 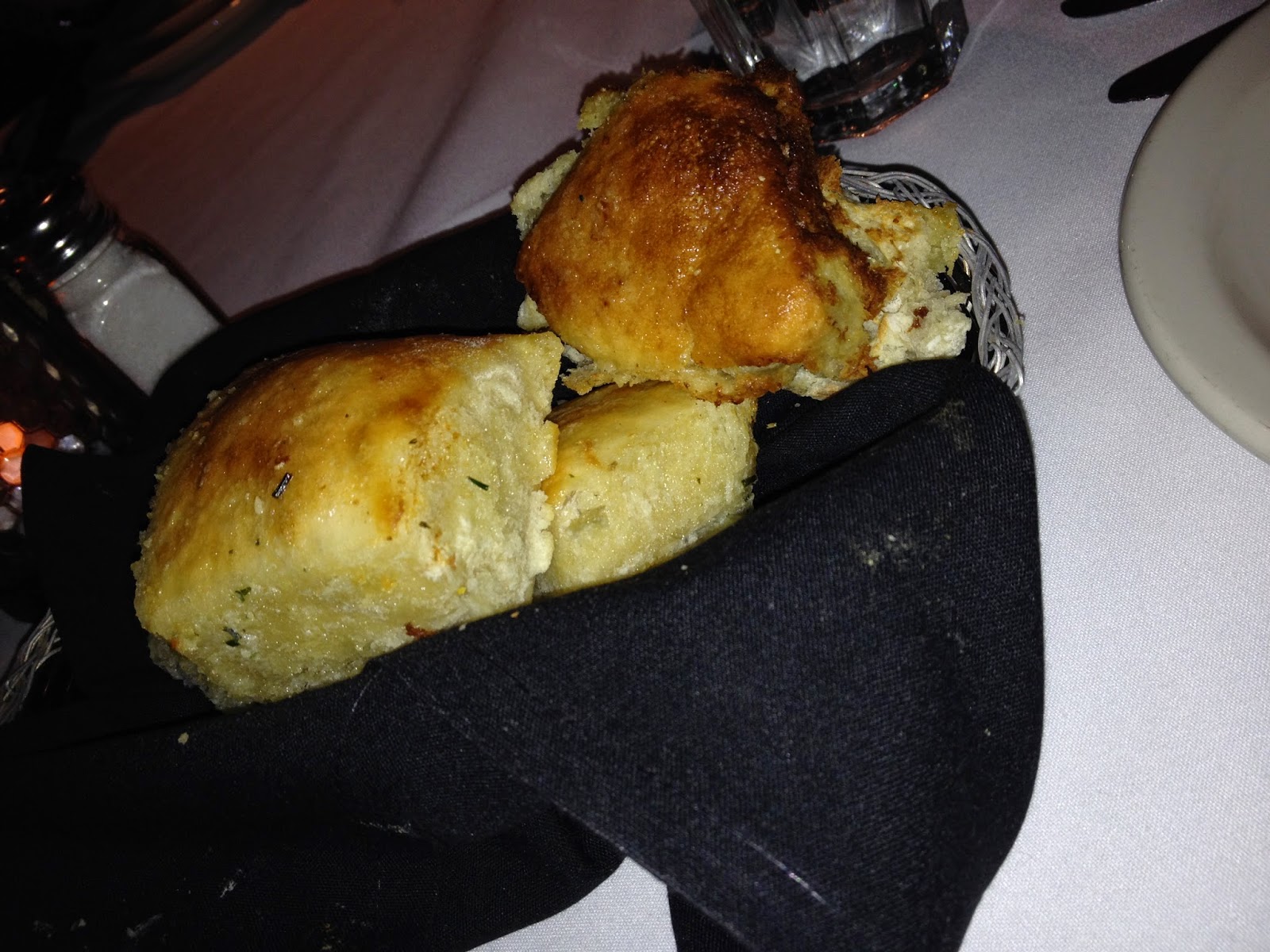 I found a great deal in a prix fixe menu for $35 that had a couple starter options. I selected the Romaine Hearts, which was INCREDIBLE. It was tossed with a champagne rosemary vinaigrette, bleu cheese, pecans and apple slices. Entrees available were salmon, a 6 oz. filet or a chicken dish. I opted for the filet, which was served with some wonderful red skinned, garlic mashed potatoes and some delicious, perfectly seasoned al dente green beans. 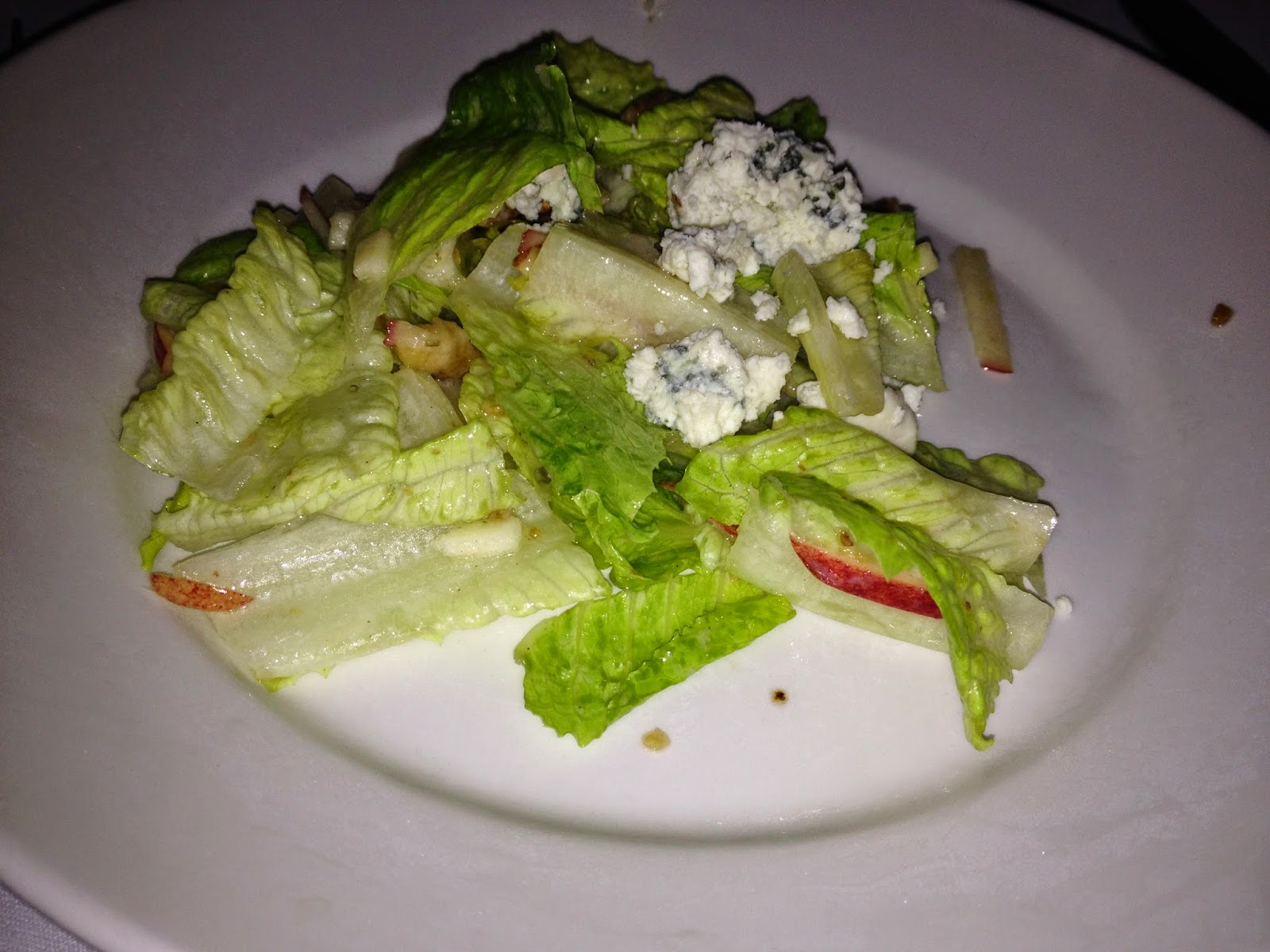 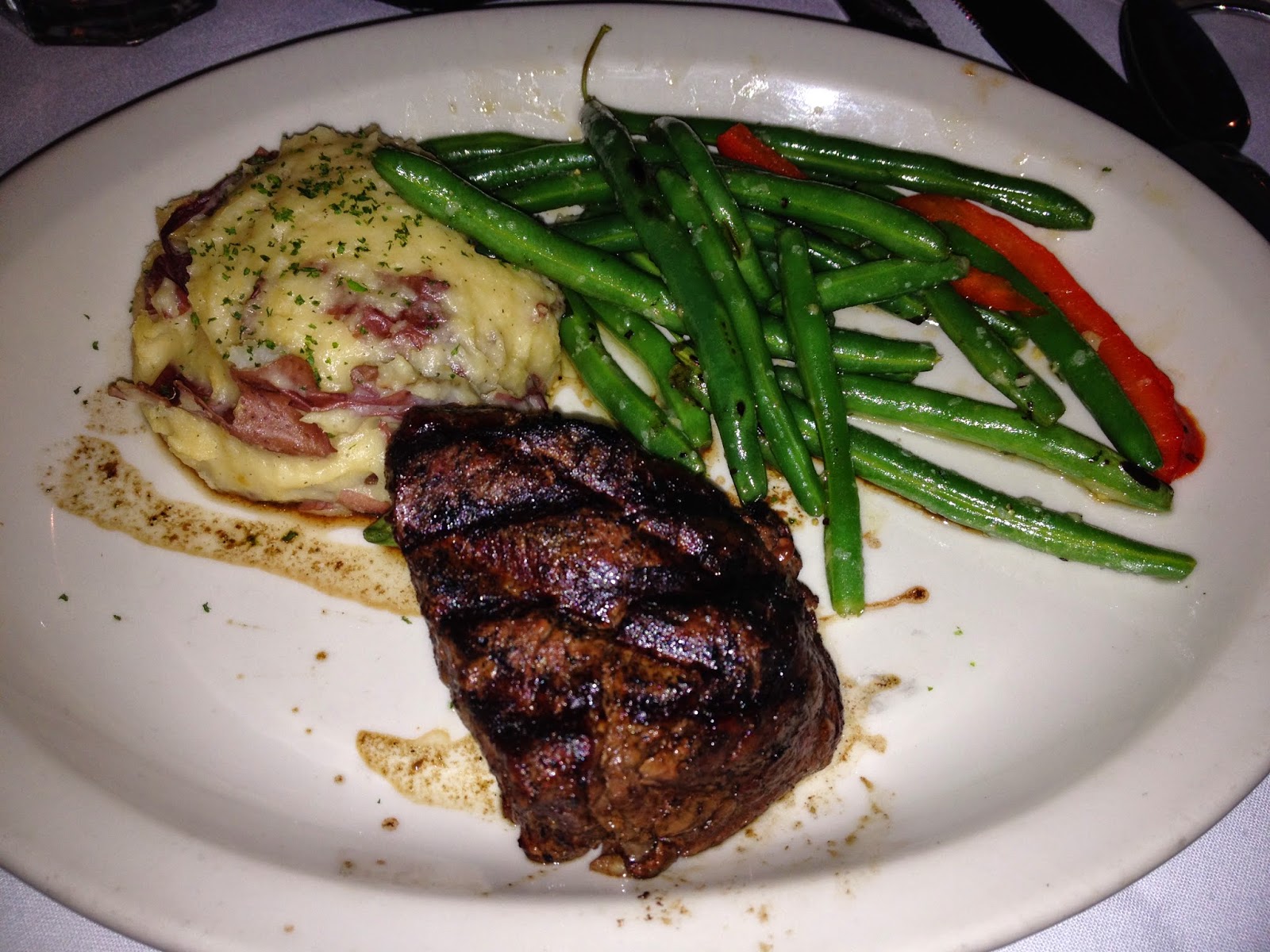 I sadly had no room left for dessert after finishing my meal, but the special I ordered also included dessert - either creme brûlée, cheesecake or a decadent brownie. I had originally ordered the creme brûlée, but switched to the brownie as I figured it would be more portable, and I brought it back to the hotel with me (along with a serving of fruit from my son's meal that he didn't touch.) Umm…don't judge me…but I just may have finished off that for breakfast the following morning. Look at that picture. Can you blame me?

I asked our friendly server, Jim, about the meal I ordered. He said that it comes from the "Devour Downtown" event done twice yearly in Indianapolis, which sounds exactly like the Chicago Restaurant Week we have here. Dozens of restaurants in the city serve up special multi-course fixed price menus at a significant discount to encourage diners to try out new places or return to their favorites. He said it's a special menu they held over from that event and they offer it on Sunday evenings. So, if you like what you see here, think about dining on a Sunday for this special offer. 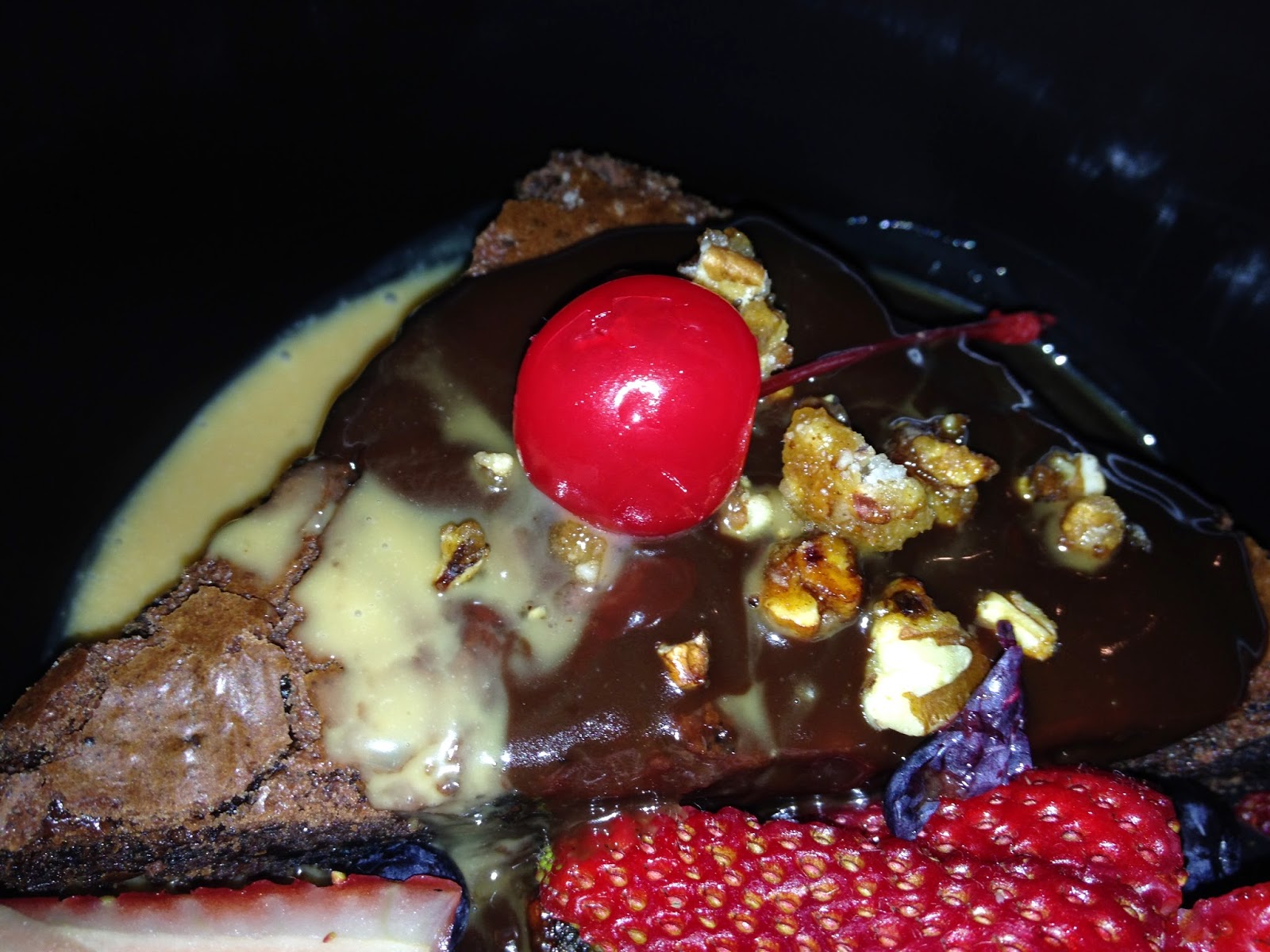 Hubby ordered up a nice ribeye. 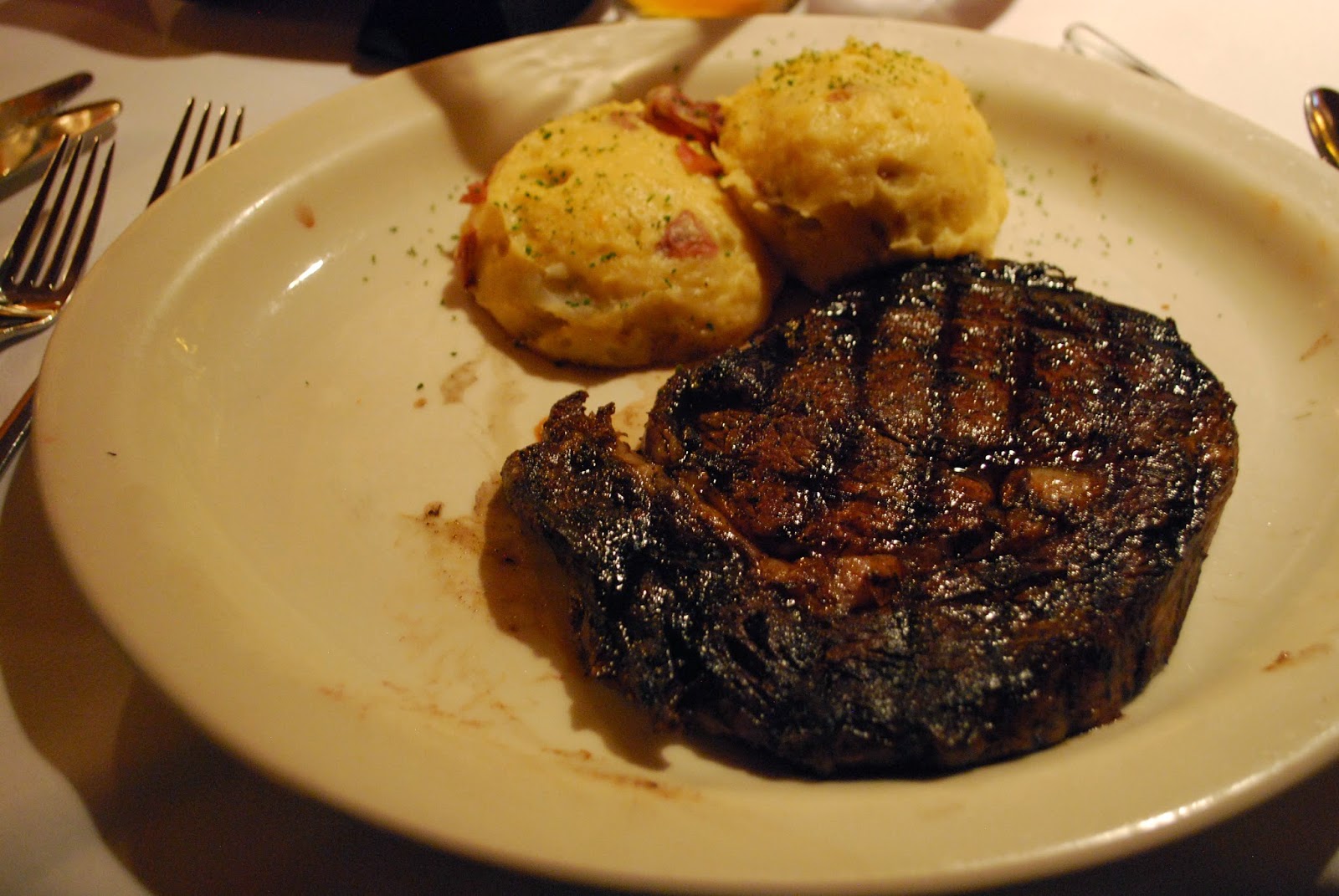 There were spectacular choices on the kids menu. A couple of them ordered steak medallions, which they devoured being the carnivores they are. 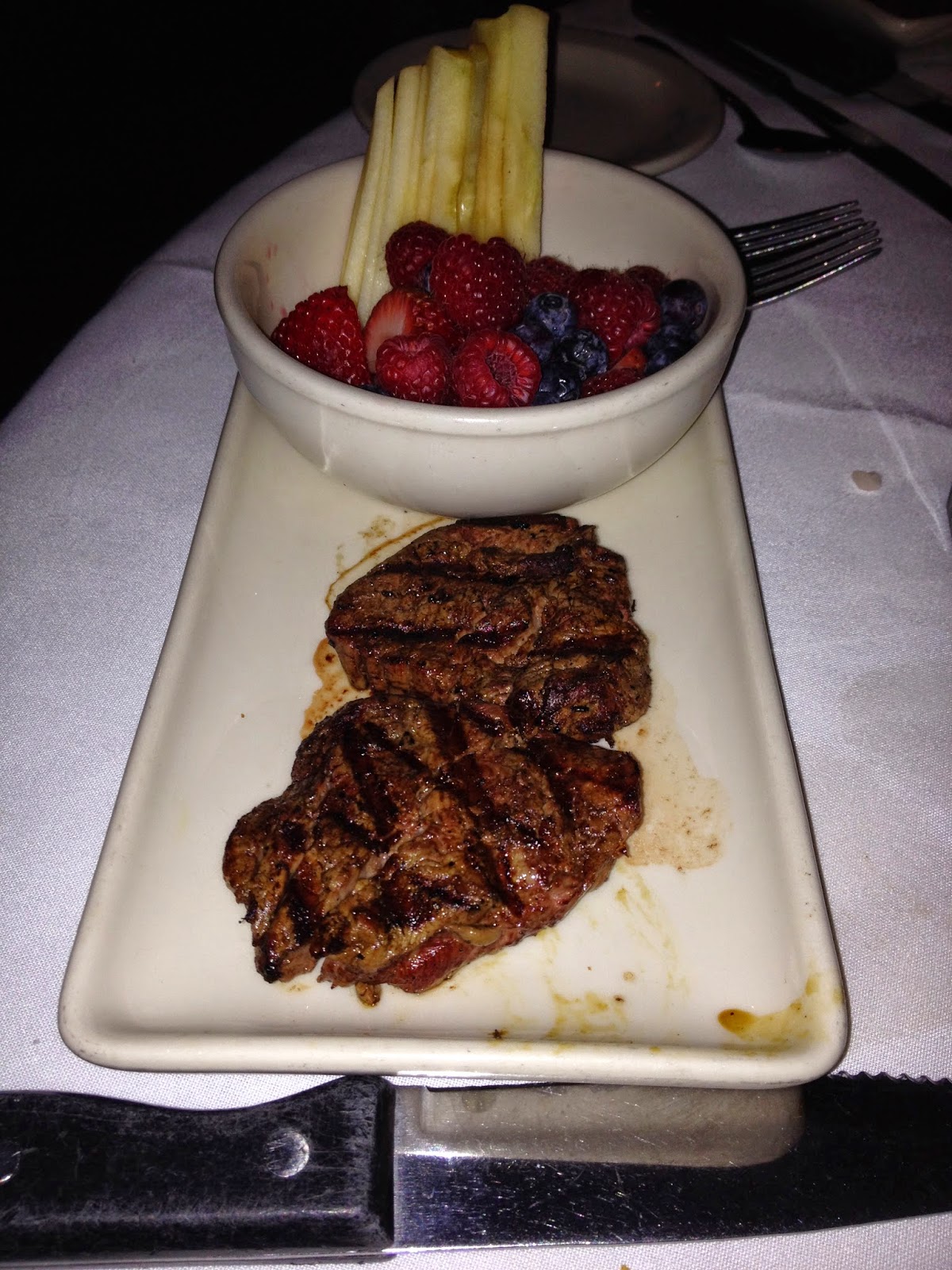 Another boy ordered the steak burger bites with seasoned fries. Big thumbs up on that one, too. 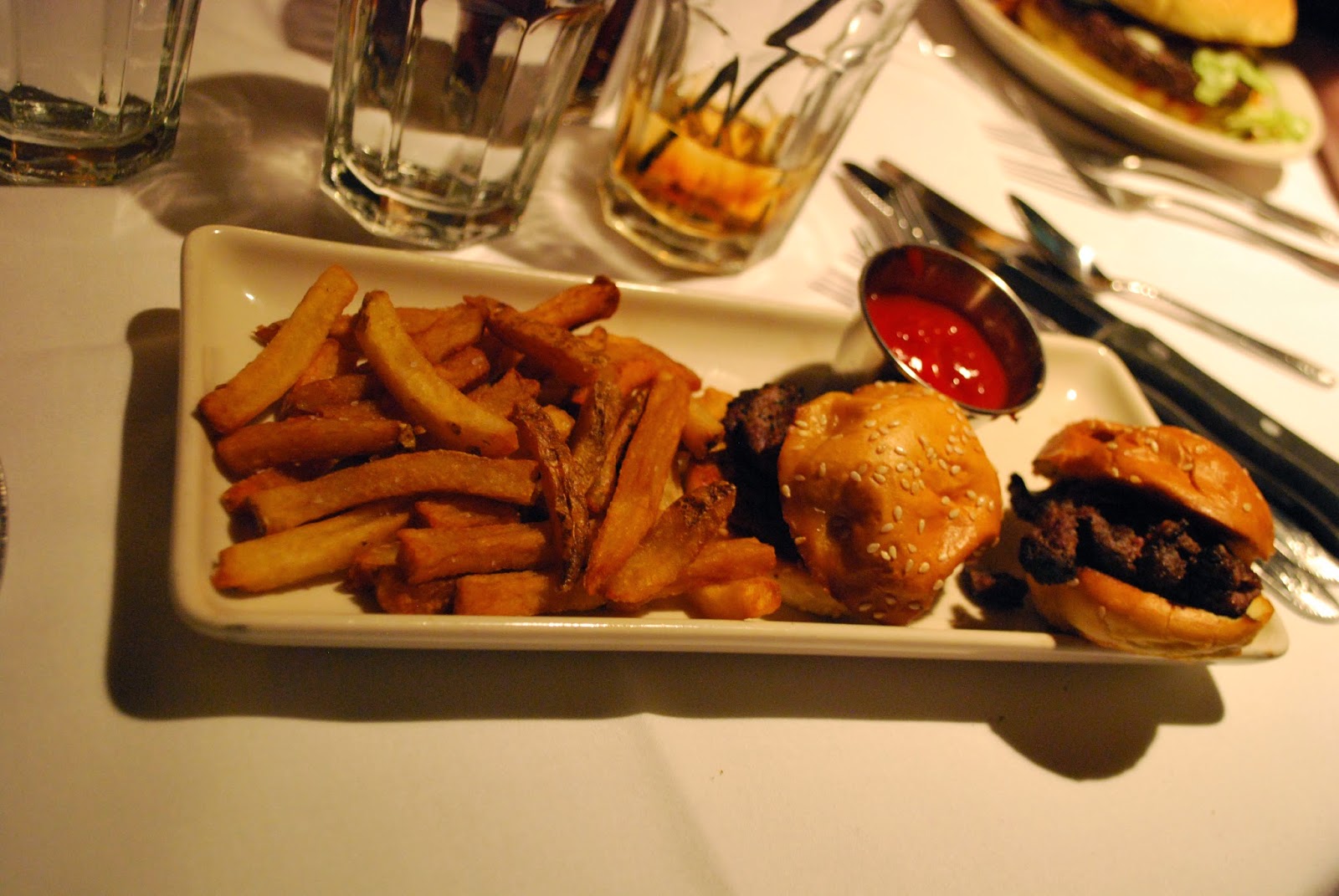 My oldest son ordered this classy burger and couldn't even get through half of it. 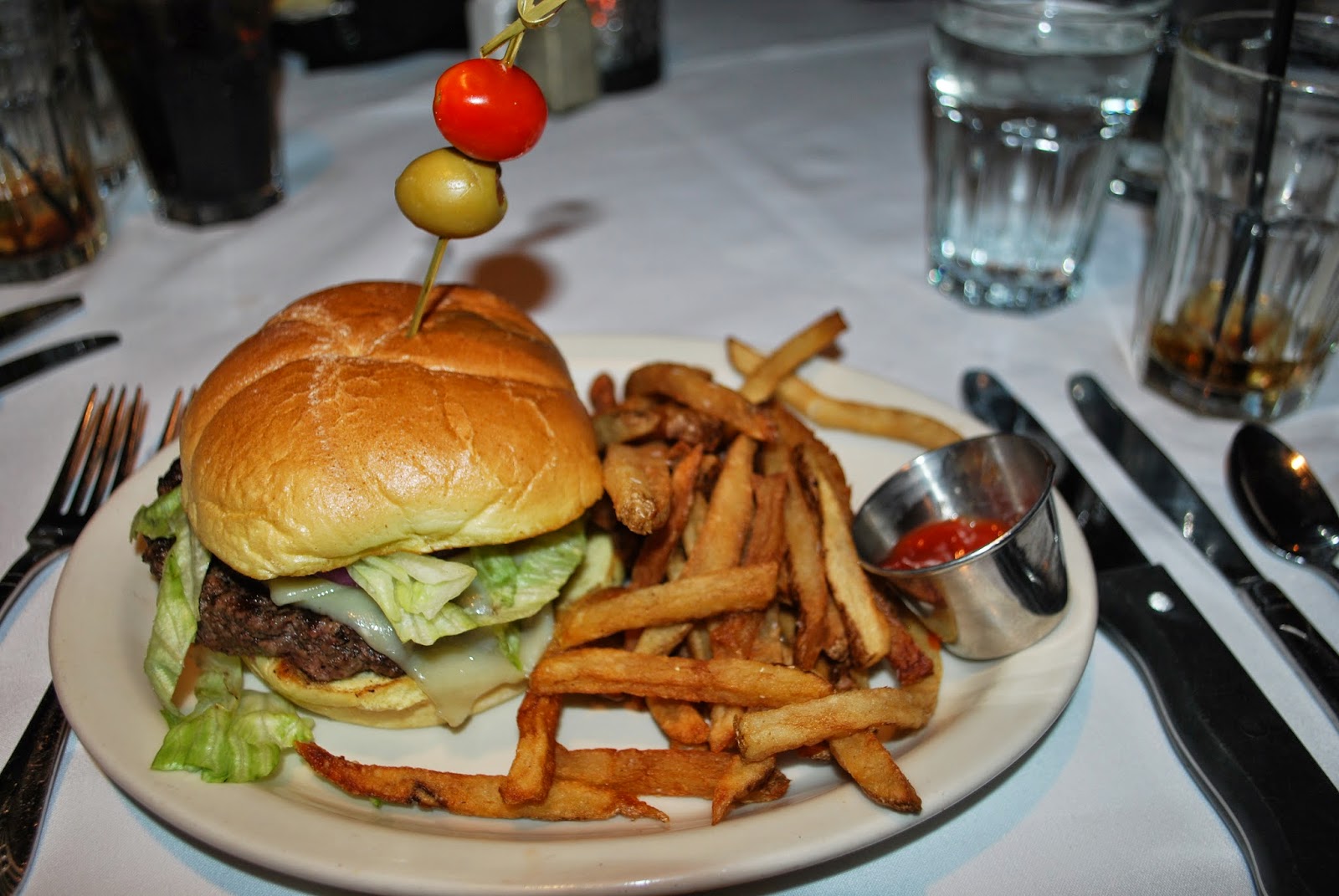 I've yet to try St. Elmo's, but Harry & Izzy's was phenomenal. I saw immediately what all the fuss is about. The place also has a fun central bar that makes for a lively atmosphere. It's a place to definitely add to the foodie bucket list if you'll be visiting Indy.