Over the weekend, we decided to head out to a little shack next to the Little Calumet River. Doesn't look too impressive from the outside. And there's no where in the interior to sit and eat your meal. Still, it's a place that Chicago foodies and visitors alike, flock to. Why? Since 1948, Calumet Fisheries has been serving everything from shrimp to smelt to sable out of this small carry-out place, much of it smoked right outside.

Here's what prompted our visit. This past week, something one of the boys said reminded of us of the movie  the Blues Brothers. For others around the country and the world, the movie may not be as meaningful as is it is here. It may just be another comedy spin-off movie from a couple of Saturday Night Live characters that doesn't carry the same significance as it does to Chicagoans. In Chicago, it is a classic....a huge, legendary, sacred classic that was filmed throughout our beloved city and suburbs. It showcased our city as the backdrop for some of the most beloved musical talents of the 20th century - Cab Calloway, Ray Charles, Aretha Franklin. And how could you not root for these two mischievous bad boys who are on a mission from God himself?

I was only 8-years-old when the movie came out, but I still recall the buzz about the filming. They'd taken an empty mall in south suburban Harvey (one where my older siblings had shopped and worked at), stocked it with merchandise and then drove a path of destruction through it. It portrayed Jake and Elwood, the two main characters, as orphans who had been brought up by nuns in Calumet City, the town bordering the one I grew up in. The movie opened with Jake being released from a prison in Joliet. It ended with a chase through Chicago. Although some of the filming was, of course, done on staged sets, much of it was done on the streets of neighborhoods I knew. The year it came out, my older brother and his then fiance and now wife of 30 years, dressed as the Blues Brothers for a Halloween party. If you happen to be one of the few who have never seen this movie or are of a generation that came along after the movie's release, do yourself a favor and see it. If you ever come to Chicago, it really is a prerequisite to be familiar with both the Blues Brothers and Ferris Bueller Day's Off...and quite a few other John Hughes movies.

So, anyway, when we were reminded of the movie, we got on YouTube and started watching scene after scene. One was the bridge jump scene. If you look closely as they pull up to the bridge, there is a fish shack on the side. They are at the 95th street bridge, one of several steel bridges around Chicago that are lifted daily as large boats and barges make their way down or up the little Calumet. I learned on my visit that the place pictured in the movie was not actually Calumet Fisheries, but another fishery that once existed on the opposite side of the street. Calumet Fisheries didn't appear in the movie, but there's still that link.

When we watched the bridge jump scene, my husband declared, "We need to go out to the 95th street bridge and get some shrimp." It had been years - like probably at least 15 since we had been out that way, so we decided we'd take the boys, ages 7, 9, 10 and 13 (my oldest was at school that afternoon) to see the bridge that Jake and Elwood jumped and have some shrimp.

The place also has special meaning for us because when we dated in high school, we would often go out there on a Friday night or a weekend afternoon, pick up some shrimp and eat it there at the bridge or drive a couple blocks down to the lake and eat it there (like I said, there is no dining room inside the place.) My husband and I were high school sweethearts. We both grew up in Dolton, and while I attended Thornton High School in Harvey, he went to St. Francis de Sales on the east side at 101st and Ewing. The school isn't too far from the 95th street bridge.

The 80's was a good time for the city - at least as far as movies go. Blues Brothers was released in 1980 and starting in 1982, almost everything that the late director/writer/producer John Hughes touched during that decade was a smash hit that was filmed and often set in the Windy City - from the Griswold's vacations to Sixteen Candles to Uncle Buck to Home Alone and so much more. Hughes was from the Chicago suburbs and his pride showed in each movie he made.

So, as we visited, the place looked a little different from our last visit. Most noticeably, the bridge has been repainted. But not much has changed at Calumet Fisheries and that's a good thing - that's such a good thing! 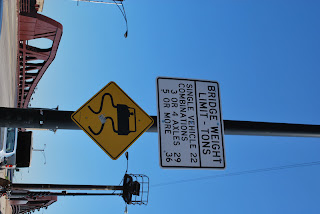 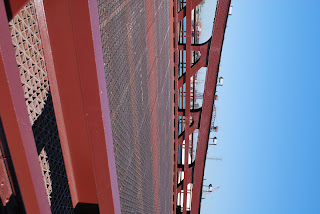 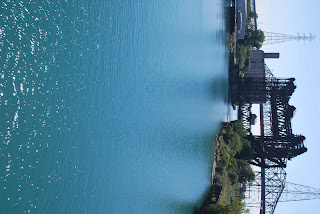 So, before we went in, we walked around a little and as I was snapping this picture of the smokehouse, I was met by Ray Campos and we had a lovely conversation. 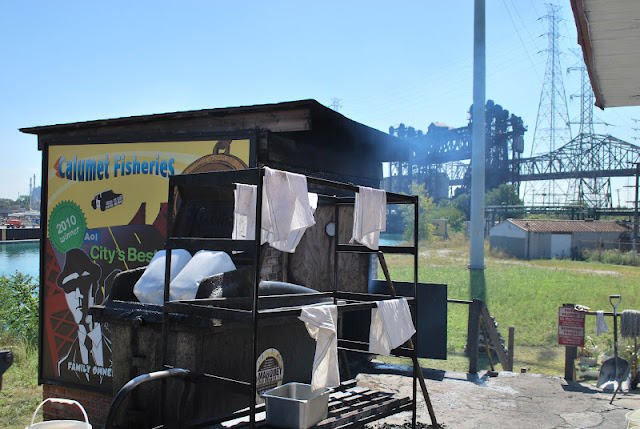 Ray saw me taking pictures and waved me over to give me a closer look. Not really any big trade secrets to keep under wraps. They do it the old fashioned way there in the same smokehouse that has been there since the 1940's. He said that they smoke about three times a week (in its heyday, Ray said that they smoked every single day and could hardly keep up with demand - and that's when there was a competing place just steps away from them.) This batch had been put in around 7 a.m. and  was almost done as he showed me around at close to 1 p.m. 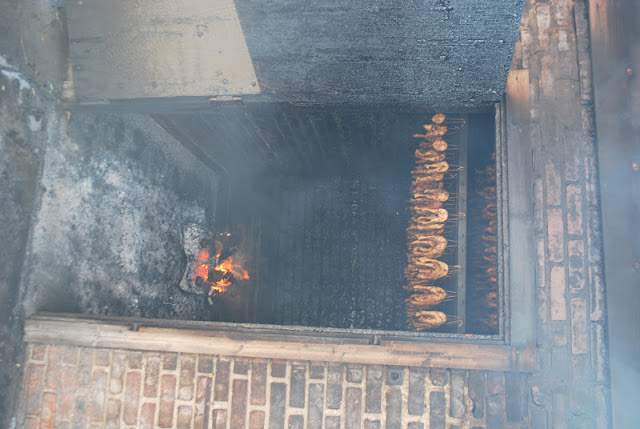 On one side, there was trout, salmon and sable. The other was filled with chubs, whitefish and catfish. 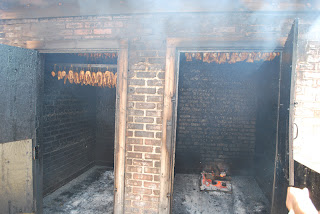 The fish hangs and is smoked slowly, some naturally and some with garlic or other spices. 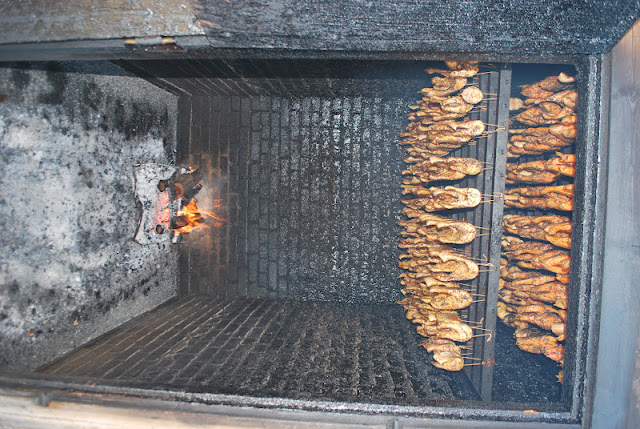 So, in talking to Ray, I learned that he's been working there on and off since around 1969 when he was a young teen. Several of his family members have worked there. He has a full-time job, but still is there each Saturday to smoke fish. That's dedication. That's what makes small businesses like this one survive and thrive. As much as you may have a good product, it's the people behind the counter (or in this case, outside the smokehouse) who make the place. The inside counter help are all extraordinarily friendly and helpful, I must add. 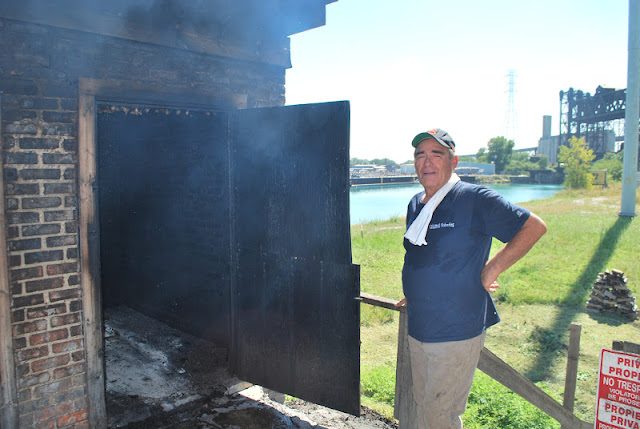 So, I mentioned the Blues Brothers to Ray and that's when I found out that it wasn't actually Calumet Fisheries that made an appearance in the movie. It was another place called King Fisheries across the street that has since closed up. However, he said that when that scene was filmed the whole street was shut down for several days. The production company paid them for the lost income that week. He shook his head and said, "We should have kept a copy of the check." Then he mentioned a bakery that had been on the other side of the bridge and he recalled that his friend who owned the bakery told him that John Belushi walked in and asked how much money they brought in during a typical week. When they gave him a figure, he pulled out some cash, handed it over and said, "We're going to be shutting down the road for the week." Don't you love when a simple trip for a fish dinner evolves into a conversation like this? 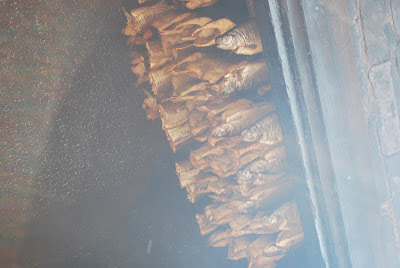 So, here's what Ray was preparing out in the smokehouse. Doesn't it look fantastic? 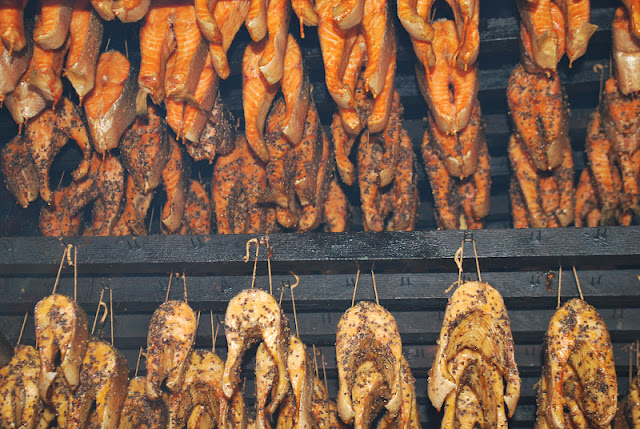 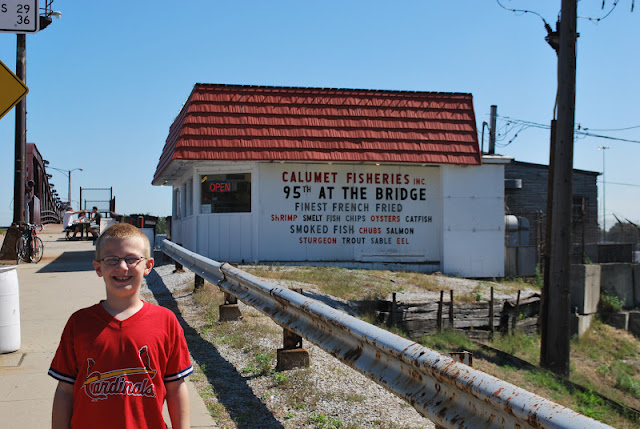 My 9-year-old outside the Calumet Fisheries. 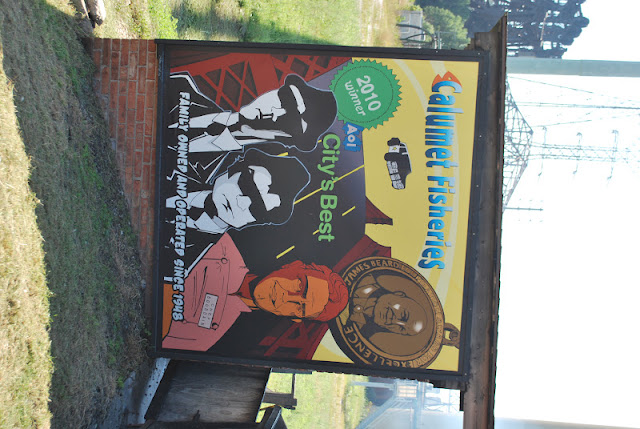 The side of the smokehouse. 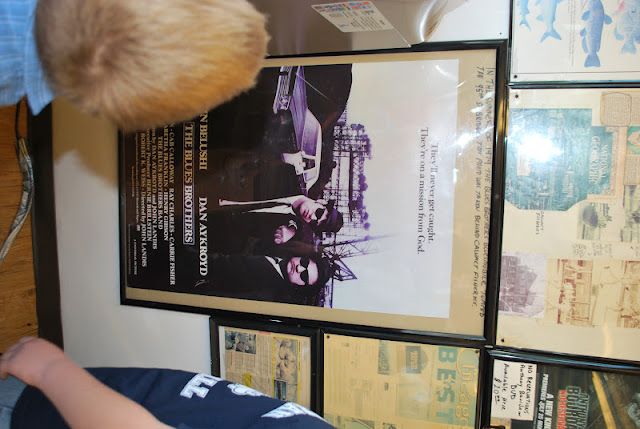 Once you get inside, the walls are lined with posters, newspaper clippings and fish-related content. 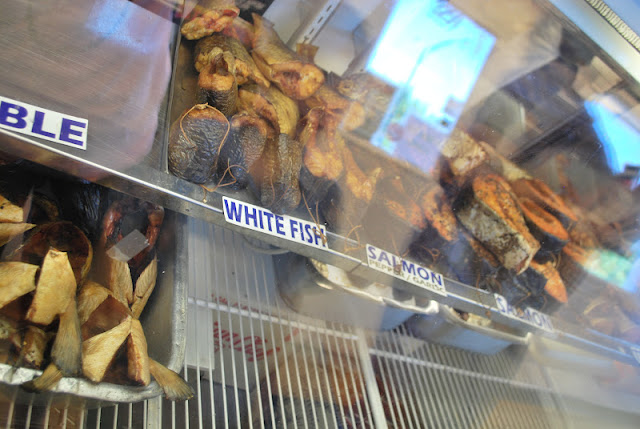 A peek inside the case. 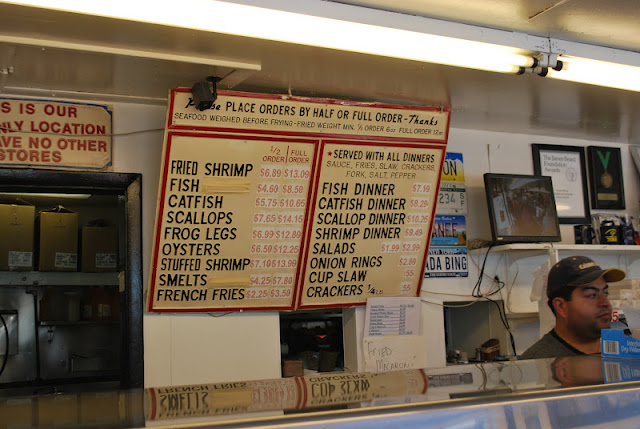 The menu - one of them anyway. Another hung on the side wall with additional offerings. 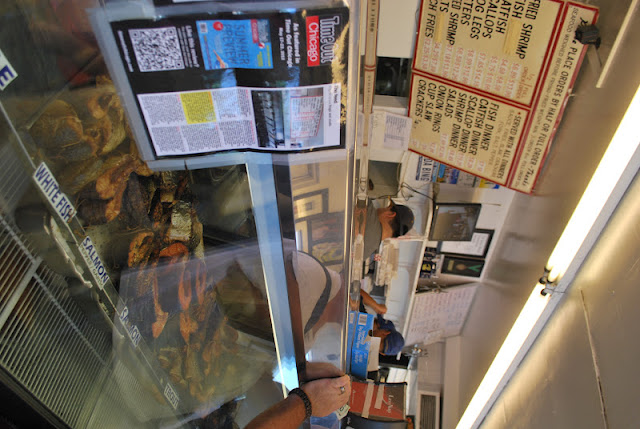 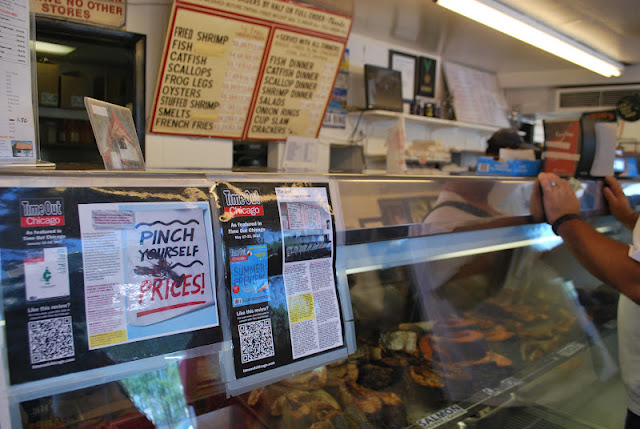 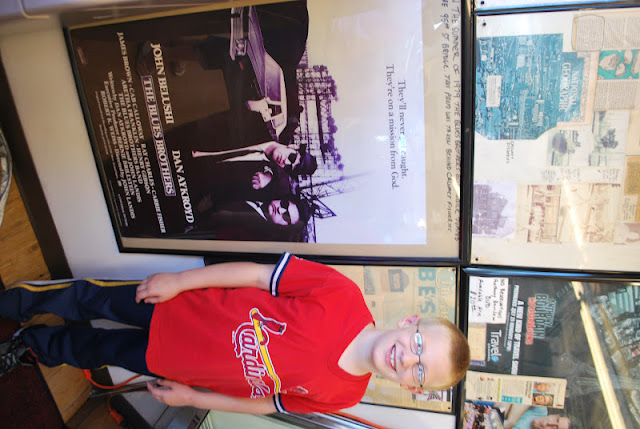 The movie poster...it said "They'll never get caught. They're on a mission from God." 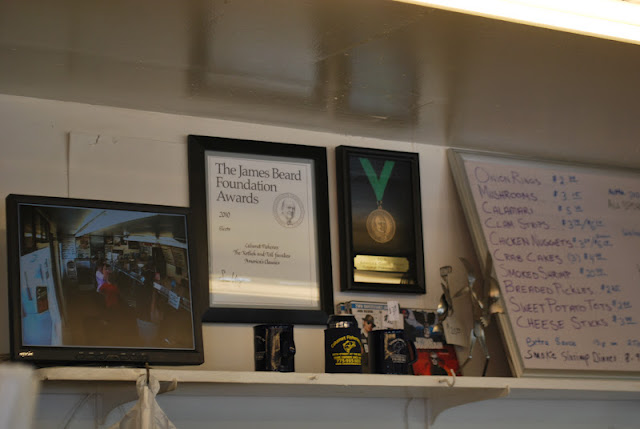 The James Beard award that hangs on the wall. 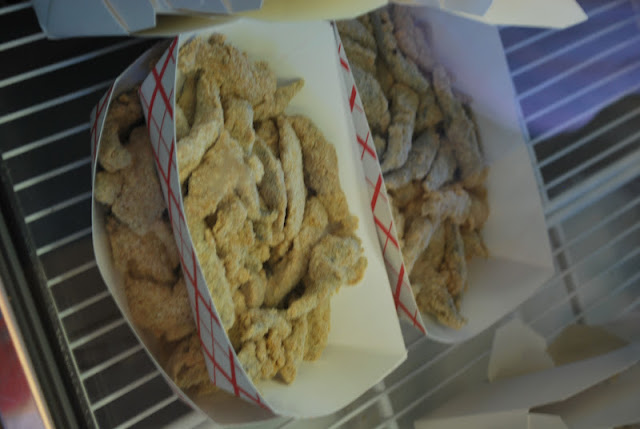 We went just down the road to Calumet Park to eat our food. We sat by the lake and ate our lunch. I had forgotten how good the fried shrimp was there - so soft and succulent on the inside and crunchy on the outside. 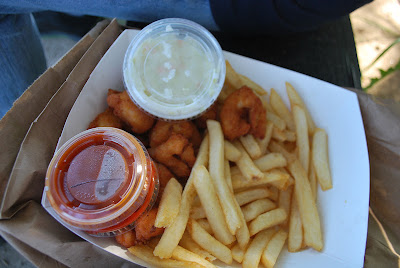 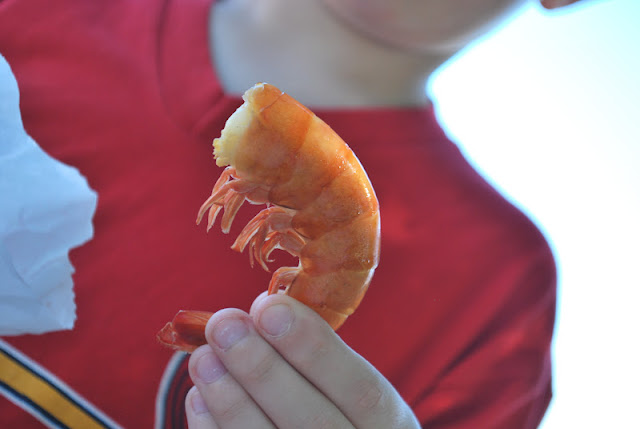 Now that's a jumbo shrimp. :) My husband is very anti-fried shrimp. He thinks breading or batter ruins it. I disagree. I like shrimp pretty much prepared any way - fried, stuffed, sauteed, boiled...and smoked. That's right...smoked shrimp!!! And Calumet Fisheries has the best. When we first went there when I was a teenager, I had never had shrimp before. So, he decided to take me there to introduce it to me. Well, when you're 14 and this is the first glimpse you get of it, little legs and all, it's a little unappetizing. So, seeing my hesitation, my then boyfriend (and now hubby of 21 years) peeled one for me. Yum. I loved it instantly. He peeled me another. And another. For the next several years, he always peeled my shrimp for me. (Now that's love!) So, as we sat on a bench the other day eating, I asked hubby if he'd peel some shrimp for me like he used to do. His response, "Um, no. Honeymoon's over. Peel your own."

And this was the masterpiece of the meal - a big 1 1/2 pound piece of smoked salmon - peppercorn and garlic salmon. I also got some trout, but it didn't even get opened. 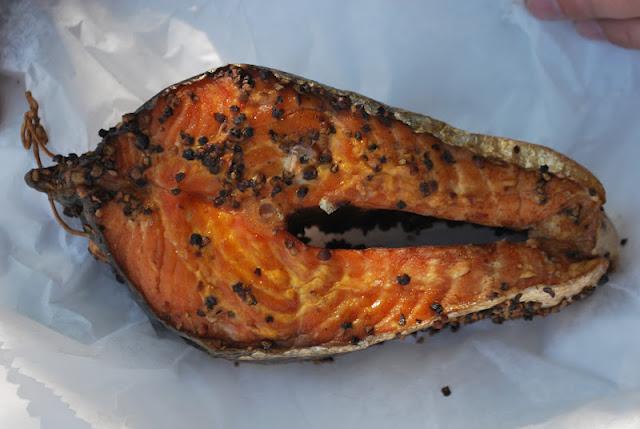 If not everyone in your family is a seafood lover, don't let it keep you away. There are chicken nuggets on the menu, though it would be kind of a disgrace to to order them in a place like this. There are also several fried sides, like cheese sticks, sweet potato tots, mushrooms and onion rings. Oh, and I also saw a sign for fried macaroni and cheese. Hmmm...that may be worth a try.

Some things you should know if you go:

1) Cash only. No credit cards, but they do have an ATM inside.
2) There are some picnic tables outside where you an eat. I even saw a van load of about six people pull out law chairs and set up an eating area in the empty field beside the place. Or, do like we did and drive straight down 95th until it ends at Calumet Park and eat in your car or on a bench overlooking the lake.
3) Grab napkins before you go. They probably won't be in your bag.
4) Smoked fish is served cold. You're not buying the hot fish right out of the smoker. You're probably getting stuff smoked the day before...but that just gives the flavor time to marinate.
5) If you're not from the area, don't be intimidated by the neighborhood. For the most part, the locals are friendly. It's not the roughest of places, but stay alert and then own the place like your name is Elwood.
6) Go to the website before you go and print off the monthly coupon. My printer is on the fritz, unfortunately, but this month's coupon was 10 percent off fried seafood dinners.