After scoring some rare fresh Michigan peaches just before Labor Day, I decided I'd use a couple to make some popsicles. I looked around online for recipes...two problems: 1) They all directed you to puree the peaches in a blender. 2) Most of them called for Greek Yogurt. Why were these a problem? Well, everyone was in bed and it was about 11 p.m. when I decided to do this and I didn't want to wake anyone up with our noisy blender. And I have never eaten Greek yogurt and didn't think I had any in the fridge -- but then I remembered that I had seen some on sale a picked up a couple small packages, but they weren't plain - they were passion fruit flavor. I figured that the two fruits may make for a good combination.

So, I combined a several different recipes I came across and here's what I made: 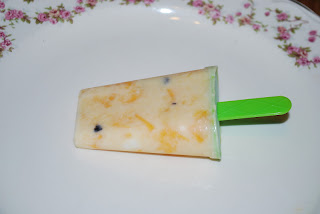 Mix all ingredients together and place in popsicle containers and freeze for at least 4 hours.

This did work out well with the mashing of the peaches. And then I added a diced one in at the end just because I love the chunky texture of fruit. And the passion fruit was a nice addition. I was trying to avoid sugar, so I used honey. It could have used a little bit to sweeten it up. The honey wasn't quite enough and it still was a bit tart, but I wouldn't really want to up the honey and have it overpower the fruit. All in all, not a bad experiment. 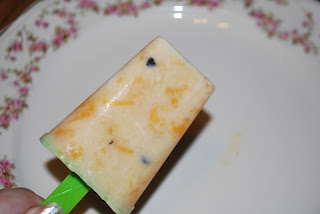 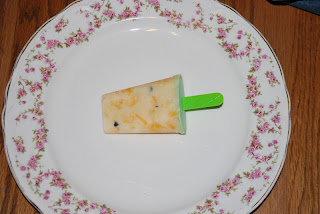