$24 in 24 with Jeff Mauro premieres tonight


Last week I had the chance to chat by phone with Jeff Mauro - the Sandwich King of the Food Network. Since he's a Chicago native, it was a fun interview. In the more than 12 years now that I've been a writer, I have interviewed some interesting people - from singers to athletes to authors to veterans to little old ladies who volunteer knitting with their church group. Every story is unique and so interesting. And while I truly cherish those conversations with knitting groups about the hats they are making for the homeless or the baby blankets they are knitting to donate to hospitals, I really love interviewing people about food.

People are so passionate when they discuss food, whether you're interviewing a local Hispanic lady about how she makes her homemade tortillas or grilling the organizer of the annual Pierogi Fest about how the beloved little dumpling can justify a huge festival or talking to a big shot on the Food Network, like Mr. Mauro. :) Some of my favorite all-time interviews have been with Seattle Sutton, Art Ginsburg (Mr. Food) and James Villas.

So, back to Mauro's new show. Tonight you can tune in at 9:30 central time to check out the new show, $24 in 24. I'm looking forward to it. Besides writing about food, I also do a lot of travel writing and have been at that longer then I've been writing about food. And the two intertwine so well. When you have a show that combines travel AND food, I'm all over it. So, I'm anxious to see how Mauro pulls it off - visiting a total of 7 cities in the tour for the series, he spends only $24 in one day on three meals and a snack. I can't wait to see where he went and what he ate.

The interview was for a Northwest Indiana Times foods article that will print soon. I was seriously almost drooling on my phone as he described some of the stuff he tried...like a bagel. A bagel is a bagel, right? Noooooo....no sireeee....not the way he described it. The one he had for breakfast in New York sounded like a work of art and a foodie's dream. He said it was one thing on set that he couldn't take a couple bites of and walk away! Did I mention it had bacon and cheddar in it...then more bacon and cheddar on it then it was baked again....then toasted..and then stuffed with cream cheese. See? Aren't you drooling, too? Tune in tonight to see what Mauro found on his quest across the country for some good economical meals. 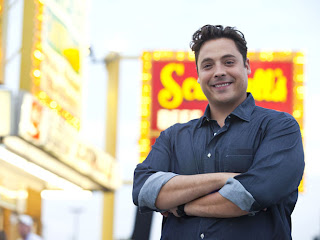