Introducing Quinoa to the Family

I first heard about quinoa (which I pronounced incorrectly for a long time) when I was doing an article on meatloaf for the food section of a newspaper that I write for a couple years ago. A local guy shared his recipe for what he called "Runners Meatloaf" - a lean, but protein packed dish that he'd make before a race day that included ground turkey and quinoa.

I've since had it at restaurants. I tried a quinoa burger at Jane's Restaurant in Chicago that was outstanding and at Seasons 52, I sampled the vegetarian tasting with a nice quinoa dish. I thought it was time I tried making it at home. I was shopping at Strack and Van Til and asked two employees who didn't have a clue what it was before someone pointed me in the right direction - the pasta section. I grabbed this Roasted Garlic and Olive Oil package, which came with a seasoning packet that really gave off a good aroma as it cooked.  I look forward to trying more quinoa products.

I had my son, his buddy and my dad try it right away and they liked it. Another one of my boys, who really likes rice gave it a thumbs up, too. For those who haven't tried it, it's kind of hard to describe. It's not quite like rice. The closest comparison I can think of is cous cous. It's a super tiny, fluffy grain when cooked. 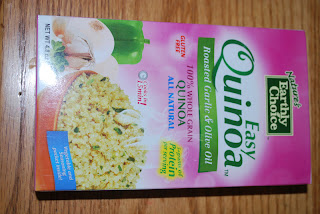 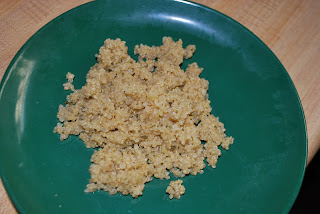 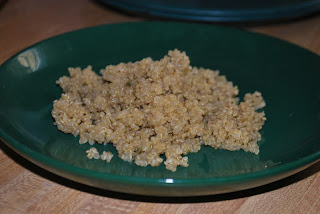 I served it as a side dish for lunch one day and the next day, I used it for some lettuce wraps. I had been at Calumet Fisheries a couple days earlier with my husband and boys and we had gotten some shrimp and smoked salmon and trout. With a big piece of smoked salmon left, I decided to flake some off and use it in a wrap. It was good. Quite good. I repeated the same lunch the following day! :) 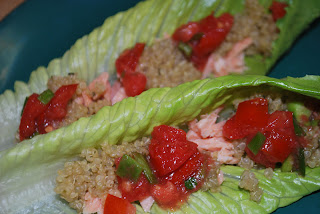 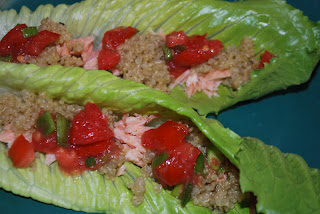