Don't you love when you're on an road trip and accidentally stumble upon something cool that ends up being one of the highlights of your visit? I recently visited Milwaukee with my family during the bitterly cold and snowy days of late February and early March. I had a nice itinerary lined up for my press trip by the folks at Visit Milwaukee, but managed to squeeze in an extra recommended stop that I adored.

Our first stop was at an an uber cool spot with tasty cuisine and ping pong tables, Evolution Gastro Pong, which I'll post about later this week. My contact met us there for lunch and during conversation she mentioned Old World Third Street and the German influence there. I knew I'd have to squeeze in a stop to that neighborhood, one of many ethnic pockets in the city with restaurants, bars and shops reminiscent of Milwaukee's early days as the influx of immigrants brought with them bits of the old country.

My father-in-law was a native of Berlin, Germany who came to the states in his late teens as an apprentice and never returned to his homeland. He had a thick German accent, was very old school and had a fondness for German brews. It was he who introduced me to Hofbräu, his favorite imported beer. While it's now more readily available, he used to have to drive an hour to a little German deli in the west suburbs to pick it up. Chilled bottles of HB original we available at many family barbecues. "Stewy" as we came to call him is sadly with us no more. He passed away nearly two years ago after fighting cancer. I can't tell you how often I think of him and smile, though, and on this trip to Milwaukee he came to mind quite often and I thought about how much he would have enjoyed some of the spots we visited.

When we arrived on Old World Third Street, the block was bordered by a brick intersection. We parked and walked the block that includes a few bars, including the Old German Beer Hall, which caught my eye immediately when I saw the Hofbräu symbol on the sign. We walked by and crossed the street to buy some sausage, also discovering the Wisconsin Cheese Mart with connected Uber Tap. We considered sitting for a bit to enjoy some cheese and a beer, but I stuck to the schedule, stocked up on curds and aged cheddar and got out the door.


On our way back to the car, I mentioned the Old German Beer Hall to my hubby and how much his dad would have enjoyed it. I told him to head in and have a beer - a toast to Stewy. The heck with the schedule. So, in we went on a Monday afternoon at 1:55 with just a couple guys bellied up to the bar with liter mugs. Otherwise the place was quiet. I imagined what it might be like on Friday or Saturday night. Lively. Rowdy. Jovial.

We sat at the bar and the bartender came over, handed us menus and told us we were just in time for free lunch. I thought he was messing with us, but I looked at the menu and sure enough, Monday through Friday from 11 a.m. to 2 p.m if you order any beer, cocktail or root beer you get a free sausage, sauerkraut and a side. How can you pass that up?

So, we relaxed for a little while. I got my favorite Hofbräu variety, Hofbräu original. Hubby got a Hofbräu Dunkel (dark). 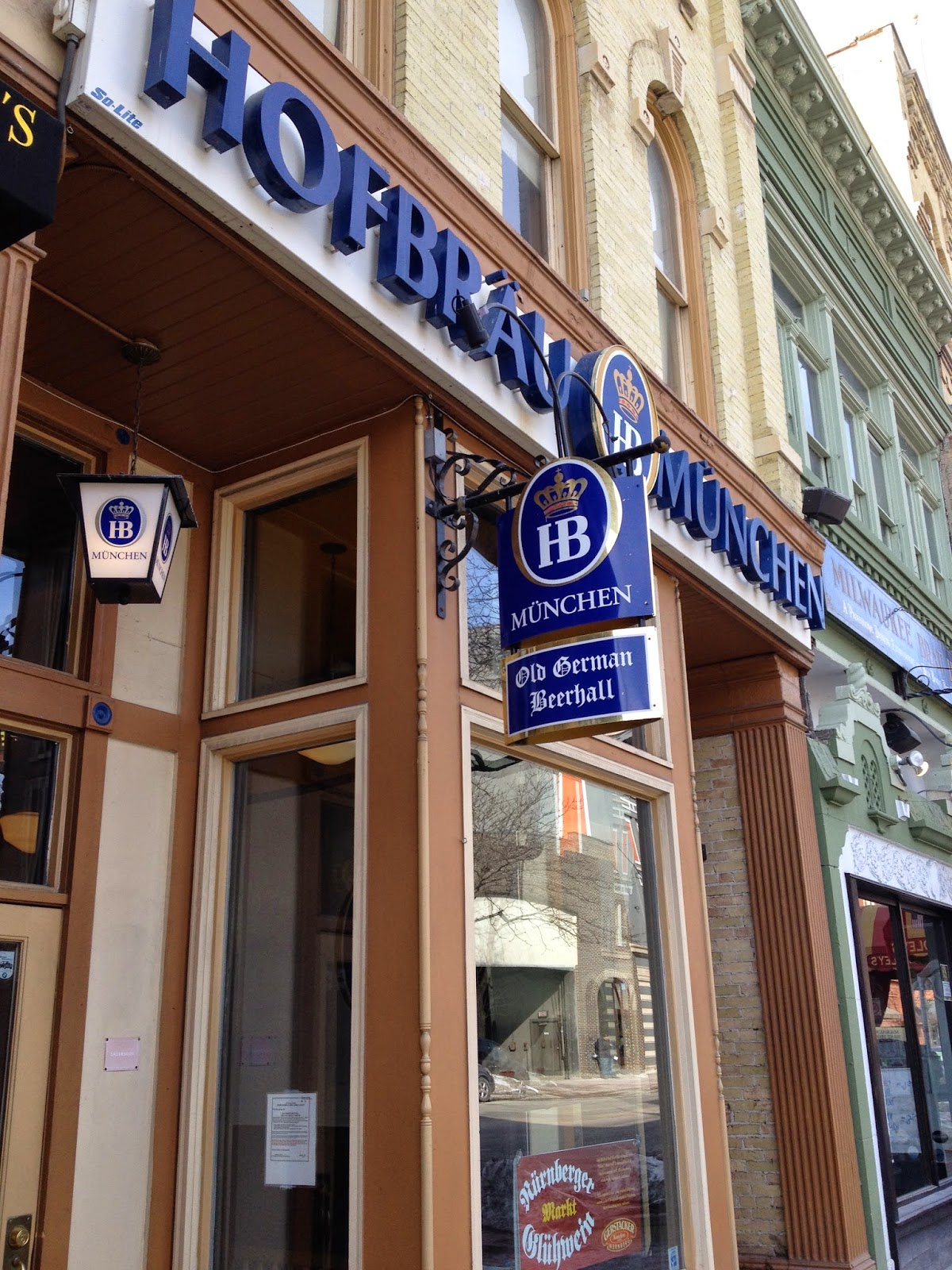 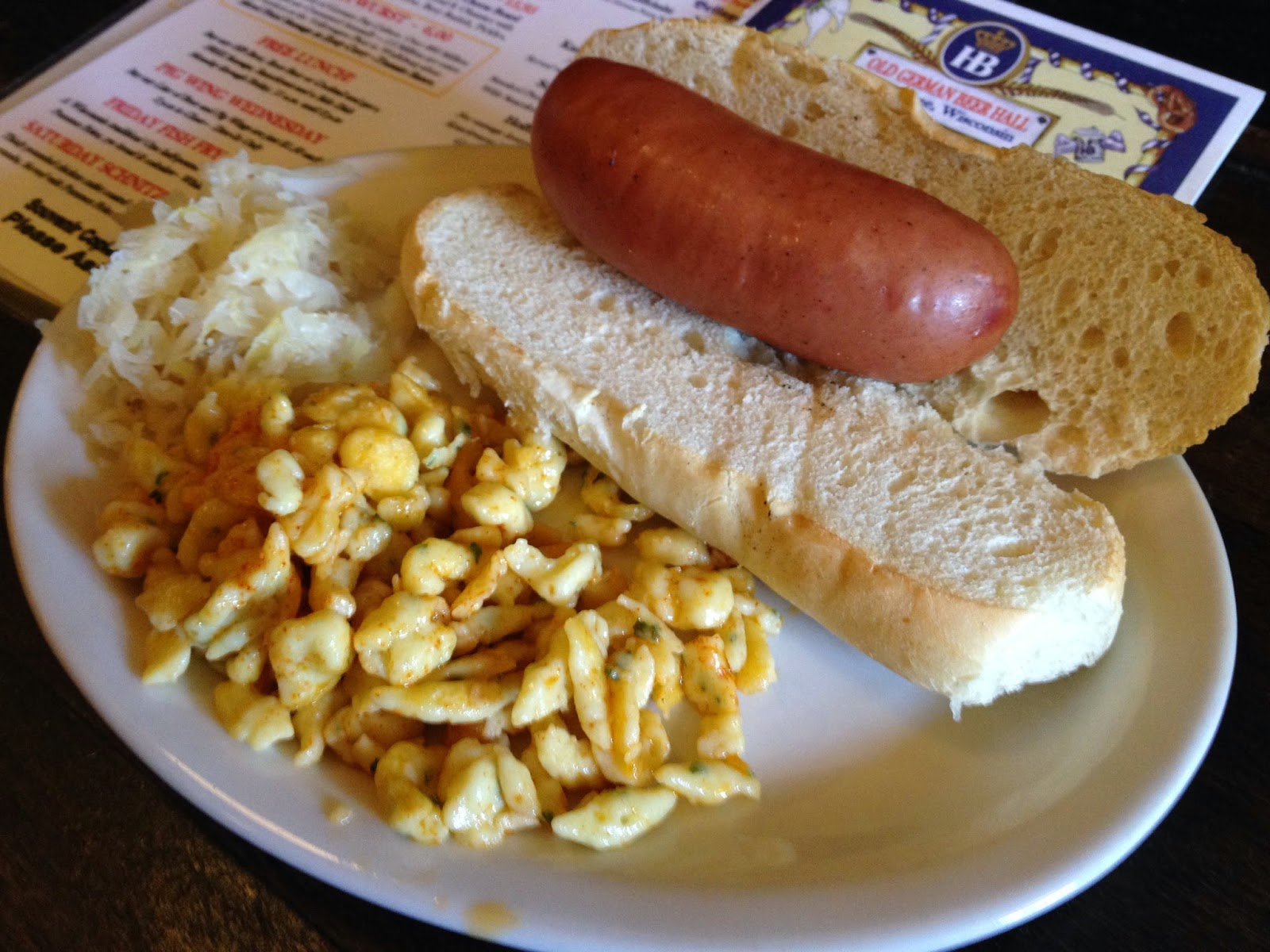 I had a smoked bratwurst (a spicy Nuremberg-style variety), katoffelsalat (German potato salad) and kraut. Due to the influence of my husband's family I've gotten to be a big afficianado of German cuisine. This was a tasty little unexpected lunch that made me smile the whole time and remember Stewy and that fun-loving personality of his. I can't help but think that he was smiling down and enjoying it just as much as we were. 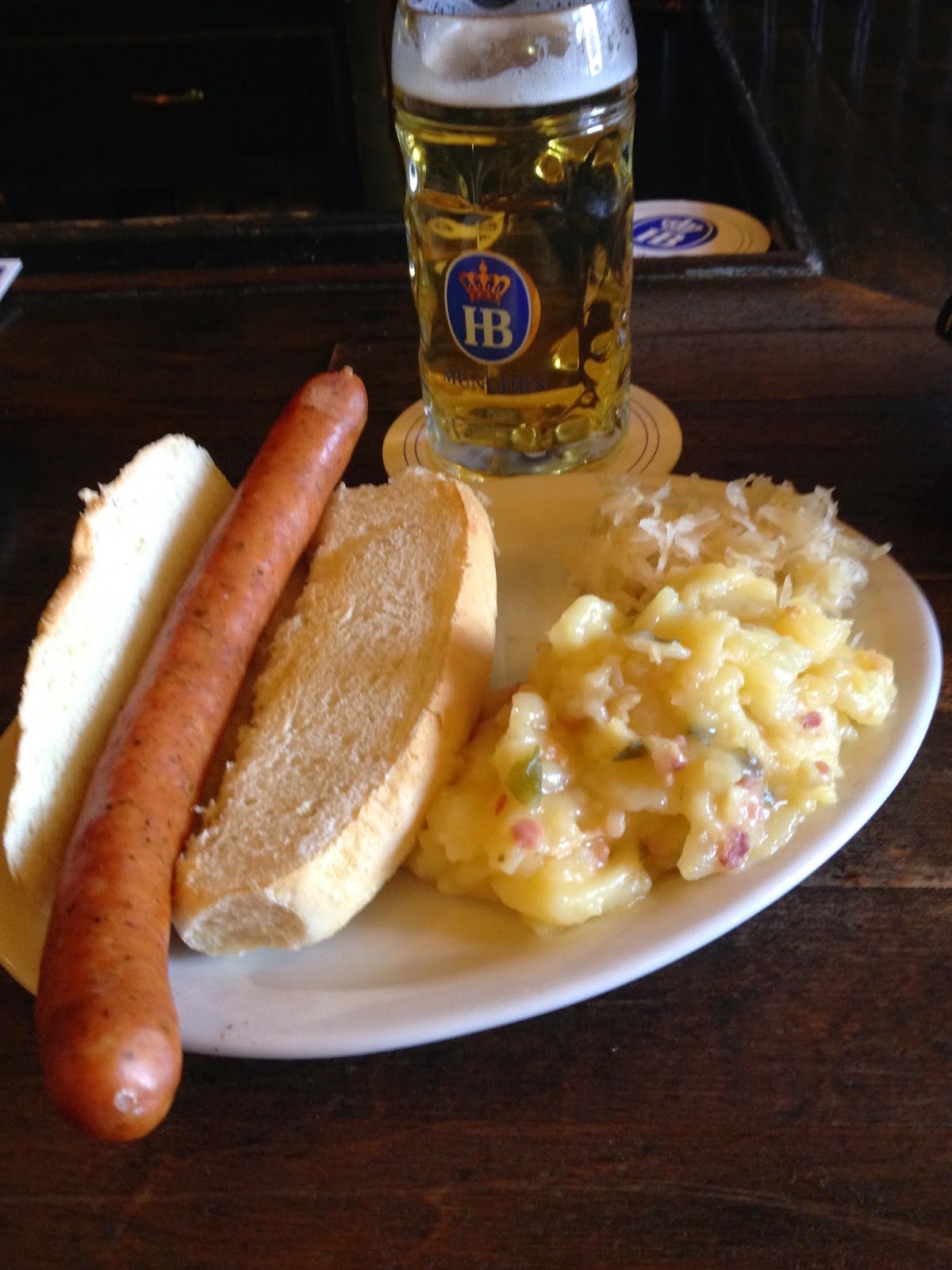 Chicagoans were fortunate to get their own Hofbräuhaus location two years ago in suburban Rosemont. The huge hall is modeled after the one in Munich with HB brewed on site. It's totally worth a visit if you haven't been there. Read about Chicago Foodie Sisters' visits here and here.

We visited so many other great eateries in and around Milwaukee and I can't wait to share more in the coming days. If you find yourself in Milwaukee and thirsty (and hungry), consider a stop at the Old German Beer Hall (especially at lunch time on weekday) and other spots along Old World Third Street. By the way. Our beer was $5 for the .3 liter mug. Lunch was free. All that for just $10, plus tax and tip!